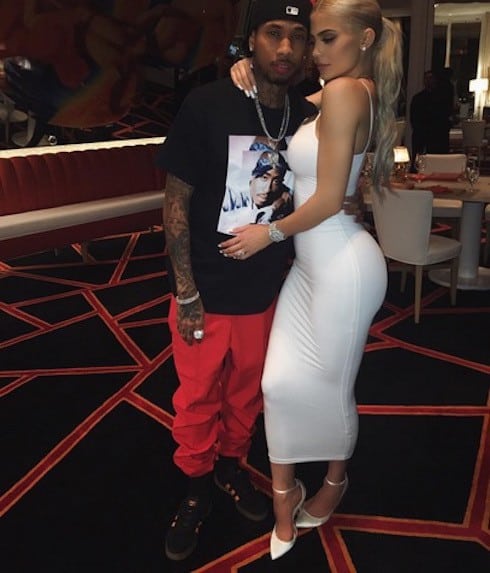 Kylie spent $200,000 to keep Tyga out of jail on her birthday this year, so it’s fitting that apparently Tyga proposed to Kylie on his birthday–and, in an unexpected show of good faith, paid off some of his own debt to try and prove that he’s serious.

Kylie has been wearing Tyga’s diamond promise ring for a few months now, and is apparently receptive to the general idea of marriage. Tyga, meanwhile, has battled creditors and landlords in a series of civil lawsuits stretching back several years, and apparently even needed Kylie to step in with $200,000 in back rent and legal fees to settle one particularly nasty case this past August 18th (which is Kylie’s birthday).

So it’s perhaps fitting that the newest rumors about the couple claim that Tyga proposed to Kylie on his birthday. OK Magazine has it on good authority that the Tygster popped the question last week, after Kylie surprised him with a trip to the gun range. (Not a metaphor.) According to OK’s source, “Kylie asked Tyga what he wanted for his birthday, and he said, ‘I want you and no one else.’ And then he asked her to be his wife!”

Kylie’s reaction? “[She] was just blown away,” said the source. “She absolutely adores Tyga and wants nothing more than to build a life with him. She’s always felt they were soul mates. So of course she said yes.”

Plus, TMZ has since reported that Tyga–possibly in an effort to make himself more palatable to the skeptics in the Kardashian family–paid $100,000 plus undisclosed interest to a Beverly Hills jeweler who recently won a legal judgment against him. Tyga apparently really did use his own money to pay the man–and, as TMZ put it, the “best part” is that “it can’t be repossessed.” (TMZ, doing unusually good work in the snark department, also called the payment a “gift to Kylie,” since Tyga saved her from having to use her money to bail him out yet again.)