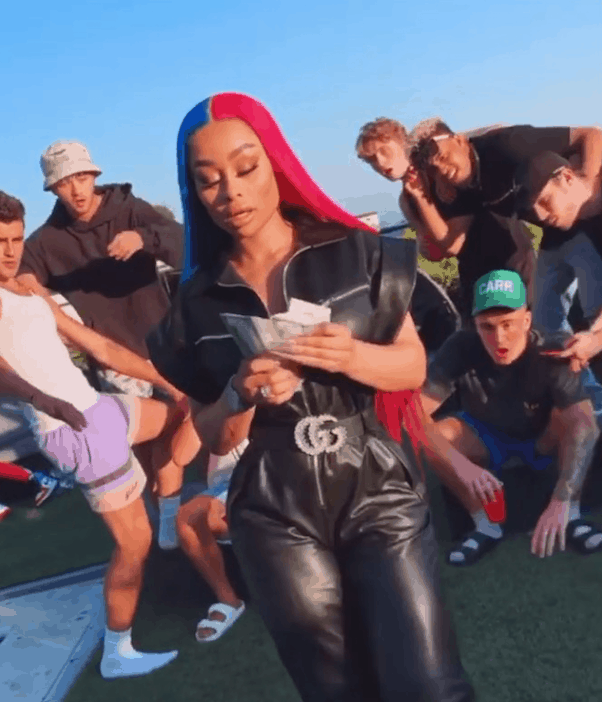 According to The Jasmine Brand, Blac Chyna is raking in $17 million per month just from OnlyFans. (We’ll touch on her other sources of income in a minute.) It seems safe to say that those rumors about Blac joining the cast of Love & Hip Hop Hollywood won’t be coming true anytime soon…

Despite only joining OnlyFans in April, the site has quickly become Blac Chyna’s biggest moneymaker. Fans pay $20 per month for the exclusive “racy pictures” she posts (and you’ll notice that Blac’s Instagram page is a lot less racy these days). At a rate of $17 million per month, the Blac Chyna net worth will be $204 million bigger by April of 2021, without even considering her other business interests.

To put that amount in perspective: Cardi B, a much bigger star in terms of traditional media and entertainment, is the site’s #3 earner. But at $8 million per month — which is still an incredible amount of money! — she’s earning less than half of Blac’s total. (Bella Thorne is reportedly OnlyFans’ #2 earner; her monthly earnings, however, weren’t disclosed in the report.)

And here’s another comparison to help you understand how much money we’re talking about. At the height of the Rob Kardashian child support drama, Rob claimed in court that Blac was making around $60,000 per month. That is still a huge amount! But it’s 283 times less than Blac’s current monthly earnings. Blac these days is the CEO to Blac 2018’s assembly line worker.

True, OnlyFans does keep its share. The site withholds twenty percent of a performer’s earnings. Even after the OnlyFans tax, though, Blac’s net income is $13,600,000. That would be a life-changing amount of money to earn in a full year; Blac’s apparently doing it every month. $20 a pop works out to 850,000 subscribers lining her pockets. That’s a small number by the standards of, say, YouTube — but then, on YouTube, the content is free.

Where else does Blac Chyna earn her money?

The woman’s got a Linktree taller than some actual trees. Beyond OnlyFans, Blac’s revenue streams include cosmetics endorsements with Monat and Lashed. She’s got a clothing endorsement from The Dynasty Way (plus her own Blac Chyna Closet). Blac has her own show on the on-demand Zeus Network, where a subscription will run you another $40 per month. And Blac is of course offering the ever-elusive Instagram follow-back — but that will set you back $250.

Curiously enough, as of this writing, Blac’s own website — blacchynaofficial.com — is not completely set up. Given all the other work Blac and her team have to do keeping up with the deals we’ve outlined above, it seems likely that they maybe just forgot to take the final step for their own page 😉

Also as of this writing, Blac Chyna is not on Cameo. Just give it time, though. Should the OnlyFans money dry up next year when (fingers crossed) there’s a COVID vaccine and people actually start taking it, Blac will likely branch out into that realm, too.