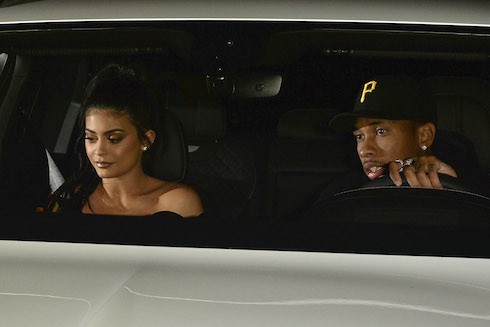 The Tyga net worth question has flared up once more–and done so in particularly strong fashion–after 19-year-old Kylie Jenner bought the 26-year-old a $300,000 Bentley shortly after his Ferrari was repossessed because of his failure to make the payments. The six-figure pseudo-rescue was hardly the first time Kylie has come to Tyga’s financial rescue; since the pair started dating, she’s done so a regularly, and Tyga is now believed to be approximately $1,000,000 in debt to his teenaged sugar mama.

People was first on the scene with the story of the surprise purchase. According to their take, Kylie and Tyga were out shopping together when they found out that his Ferrari had been repossessed. (Note that it’s actually not ironic that the two got the news while they were shopping, since that’s exactly what you would expect them to be doing.) Kylie then dropped the Bentley in Tyga’s lap, and took to Snapchat to claim that she had actually arranged for a fake repossession so that the new car would shock Tyga all the more.

Not everyone was convinced, though, given that the Tyga net worth issue always involves Kylie stepping in to save him from ruin. Hollywood Life has one theory about why she continues to do so: their sources have it on good authority that Tyga has been up-front about his desire for marriage and children, and Kylie, to put it gently, doesn’t want any of it just yet. “Recently,” their insider claims, “she had an epiphany that she is way too young for any of that, and she just wants to enjoy being nineteen….She wants to still be with Tyga, but she doesn’t want to take things to the next level right now.”

It was only a year ago that Tyga was reportedly a half-million dollars in debt to Kylie Jenner, who had lent him money for back payments on cars and rent in multimillion-dollar mansions since (if rumors are true) even before her 18th birthday. And it was only three weeks ago that Kylie supposedly took time away from her birthday to stop by the courthouse and drop $200,000 on unpaid rent and legal fees related to landlord’s lawsuit against Tyga. Add up the $500,000 debt, the $200,000 from this past August, and the $300,000 car, and you have a debt of approximately a million dollars…and counting.

Will Kristofer Saly of the KriStef Brothers return to America’s Got Talent after his serious neck injury?