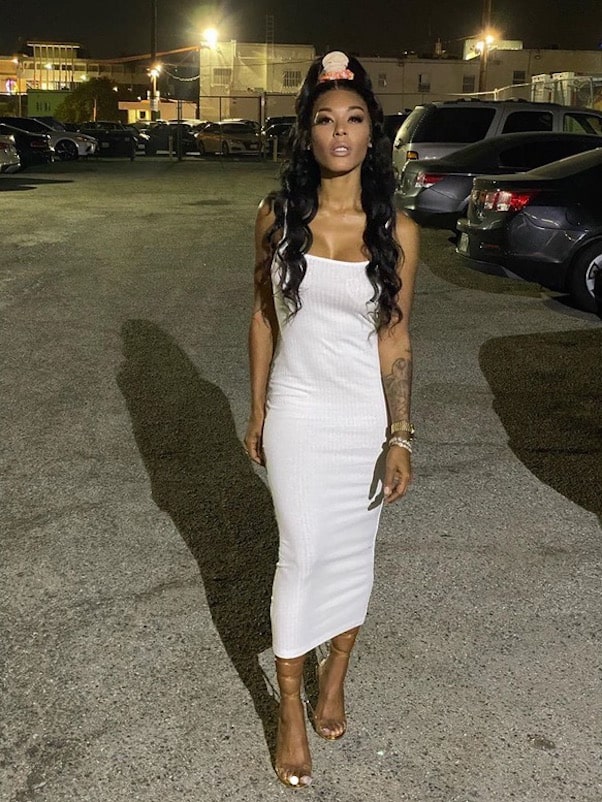 It’s been a minute since Moniece Slaughter and Scrapp Deleon dated. But he definitely left a lasting impression on his Love & Hip Hop Atlanta star.

According to Moniece, Scrapp “ravaged” her sexually when the two started hooking up. When Scrapp got out of prison, though, things went sour because he couldn’t stop looking for more villages to pillage.

Moniece made the revealing remarks in a new interview on The Domenick Nati Show. And based on her full comments, it almost sounds like Scrapp is what drew Moniece to Atlanta in the first place.

LHHATL devotées will recall that Scrapp was originally believed to be back with Tommie. At the time, he was living in a halfway house and a few months away from his complete release.

And at first it was Moniece who shot down the rumors about herself and Scrapp. She said she was “single and I eat pu$$y,” and that she wasn’t “opposed to being with a man.

And apparently Scrapp DeLeon is just that! In the aforementioned interview, Moniece only brought Scrapp up in response to a very wide-open question: If she could choose someone to date from the entire Love & Hip Hop universe, who would it be?

Then, when Domenick expressed surprise — presumably given his and Moniece’s history together — she went into more detail. “The only reason I left Scrapp alone was ’cause…man, once that man wasn’t in jail no more, he did a whole 180 talkin about he needs multiple wives.”

“So when you needed a prison bae,” Moniece went on, “I was the only one. You was trying to see sunsets and sunrises with me. And now all of a sudden you’re trying to see the sun rise and sun set with me and three other hoes.

We’ll repeat our thoughts on Moniece’s “one hell of a man” comment above. It sounds like she’s saying Scrapp is indeed an amazing guy, lover, or both. If only it weren’t for that pesky commitment part…

“Like, what is this?” Moniece continued. “Tomfoolery, buffoonery. And this is some sorcery. This some jailhouse sorcery, and I didn’t like it. I felt betrayed, played, after he done got laid. It was horrible. I felt like — the nerve of you. Getting my vaginal sprinkles and then hittin’ me with the polygamy. That’s horrible.”

“Vaginal sprinkles” is also the moment when Moniece decided to get even more specific with her answer. In a delightful mixed culinary metaphor, she then compared her vagina to a hamburger — one Scrapp made a splendid mess of.

“He didn’t destroy it to where it was, like, unusable,” she quickly clarified. “My burger’s still intact and everything. I’m saying, that was a ravaging. He pillaged my village. But he left it intact. He took some pearls when he left, but he didn’t burn the village to the ground. You know what I’m sayin?”

There have already been plenty of comparisons between Scrapp and Safaree Samuels. The latter Love & Hip Hop star made himself the gold comparison for penile projections after immortalizing himself via sex toy.

Moniece never actually went there, though. Our transcription above is verbatim. She didn’t even really imply anything about size.

Except, of course, for the word, “ravaged.”

After reading that, I can’t help but feel bad for another one of Scrapp’s LHHATL co-stars.

His clashes with baby mama Tiarra back in Season 5 were a big part of what made him a hit on the show. And once Scrapp was close to getting out of prison, Tiarra basically flashed her goods in his face to try and get him back.

But Scrapp didn’t want any of what Tiarra was offering. And she let him know how furious she was with him.

The Domenick Nati Show is available in podcast form as well as on YouTube.