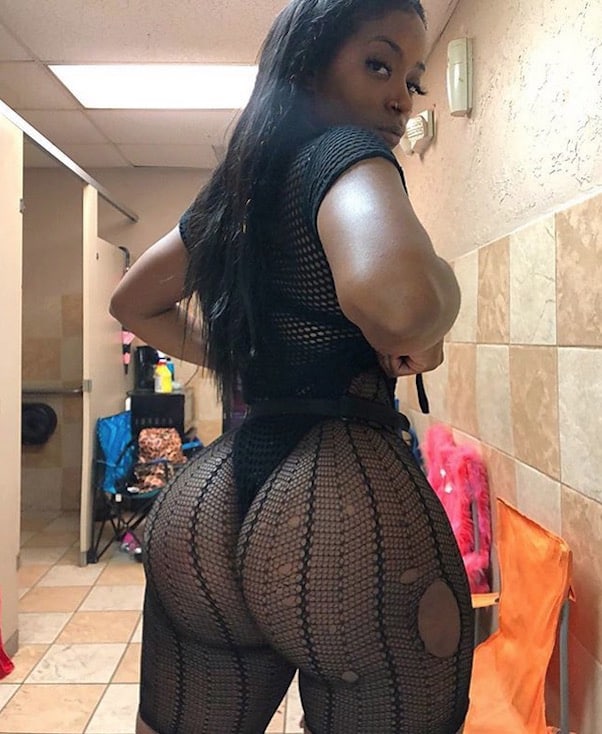 Thanks to some questionable reality TV maneuvers, Scrapp DeLeon is in a halfway house and back on Love & Hip Hop Atlanta this season. And Scrapp’s return means his baby mama Tiarra from LHHATL is also back in a big way. But after throwing herself at Scrapp in this week’s episode got viewers hooting at Tiarra for playing the fool, she lashed back — calling out the fans and VH1 for what Tiarra says is their ongoing disrespect.

The scene that got everybody riled up is, of course, the one in which Tiarra pays a visit to Scrapp’s temporary ATL digs to get the lowdown on why he’s been ignoring her advances ever since his return. Tiarra more or less sets herself up by declaring “I love this man, and I’ve made it very clear that I want to see where our relationship can go” before she’s even in the door.

Later in the scene, Tiarra doubles down on the declaration when she accuses Scrapp of being with Moniece Slaughter just for the sex. “I done threw this pu$$y at you six, eight, nine, ten, eleven, twelve times,” Tiarra tells him, causing a collective facepalm across the LHHATL viewerscape. Honey, if a man just got out of prison and he still won’t put the dick to you, he really *doesn’t* want what you’ve got.

Of course, that doesn’t stop Tiarra from popping off on Scrapp:

Tiarra waited a day for the dust to settle before saying something. On Instagram, she wrote a special response for the “booger wolves” who’d been howling at her since Monday night. (Side note: I just found out that “booger wolf” is a real, Urban Dictionary-worthy phrase, not just a playground-level insult Tiarra from LHHATL came up with in the heat of the moment. The more you know!)

But that wasn’t all the fire Tiarra threw this week. Before the episode even aired, she was taking VH1 to task for referring to her as Scrapp’s baby mama in its promos. (Since, after all, she is.) Maybe “baby mama” should be a more insulting term; it does, after all, kind of imply that the woman in question wasn’t good enough to stick around for. But it and “baby daddy” are two of the most common descriptors in the Love & Hip Hop universe, and maybe not worth getting seriously be out of shape for.

Then again, maybe not! Here’s what Tiarra had to say to VH1’s official Love & Hip Hop Instagram account — we’ve transcribed her original response below, and embedded her revision & extension of the original remarks below that:

I’m more than just Scrapp ‘baby momma’ Y’all gonna stop trying me with that bull sh!t. I have a name. It’s #TiaBecca or Tiarra. Must I run down done my accomplishment on y’all weak asses!…Put some f*cking respect on my name! Y’all disgust me. And I’m talking to VH1 Love and HipHop and WHOEVER!…for me to all y’all to keep treating me and calling me Scrapp baby momma…Y’all got me f*cked up!

@vh1 and @loveandhiphop I’m done playing with y’all and demanding my respect. (It’s typos in that comment) But stop playing with me! The other day I was threatened with being Black Balled because I said I didn’t wanna do the show anymore and I didn’t want to do green screens because I didn’t like how I was being treated and I didn’t like how they edited me or the narrative of how they painted Scrapp and I (Scrapp is my dawg for life) But this was the last straw! Must I run down my accomplishments and the shit that I’m doing now???!!!! I’m not just his baby mother! I have a name bitch! I and get shit done. He know that and y’all know that. Y’all edit me to be boring and bitter. When I’m funny as fuck and fun as fuck! Y’all take out all my shit and truth be told I get more money from the club and other projects I’m working on. So I get no financial benefit from allowing y’all to disrespect me and treat me like trash! I respect the entire crew. I’m always on set on time, I follow directions, I’m mindful and respectful of others time. And I’m creative and always want a good show. I’m never hard to work with. I did nothing to warrant how y’all try to play with me. I’m not afraid of being black balled by VH1 or #loveandhiphip because guess what…. I’ve worked on plenty of other sets And other TV projects… my character and work ethic speaks for itself! And an executive producer himself told me that if I don’t cooperate he is afraid VH1 will blackball me!!! I told him “bitch, I ain’t worried bout nutin” I’m gonna make it! But because my character and principles ain’t like theirs it may take longer… but I am not standing for the sucka shit any longer… stop playing with me. I’ve told y’all 1000 times even had numerous convos with y’all over the last two weeks. Y’all really think I’m pussy or that I’m afraid of y’all… The beautiful thing about coming up from the MUD, the streets and real motherfuckers stand behind you. I’m not afraid of y’all and not afraid of speaking for what’s right. I’m a queen, a strong as single mother, a real fucking hustler, a actress, I’m an author, a giver, a promoter, an entrepreneur, I’m Tia Becca.

Here’s the thing: Tiarra actually does have a steady career outside of LHHATL. But all this drama just makes her look thirsty for a bigger role on a show that she doesn’t really seem to need. Plus, who remembered that Tiarra was on LHHATL last season at all? Wikipedia tells me she was in 10 episodes, but I’m not convinced Tiarra didn’t edit the article herself. Maybe she sees Scrapp’s return as a chance to get some more of the spotlight; maybe she’s genuinely offended and determined to stick up for herself. Either way, it sounds like she could stand to get laid. Just not by anyone on the show.

LHHH Alexis Skyy and Solo Lucci reportedly kept it professional for the cameras, but then the sex started behind his baby mama’s back