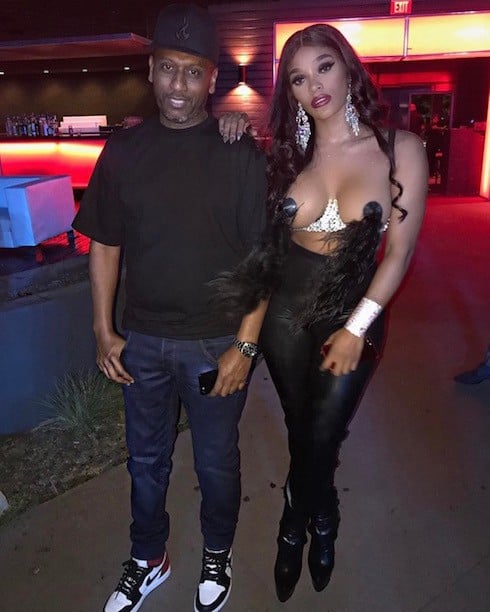 The biggest rumor involving Joseline Hernandez is that she’s planning to quit LHHATL after Season 6 in order to shoot her own series. This rumor got started last year, after it was announced–erroneously, it turned out–that she and Stevie J had both been fired from the LHHATL cast, but were getting their own spinoffs as a sort of severance package. It turned out that only the spinoff part of the rumor was true: Stevie’s aired last winter, and the LHHATL Joseline baby special, entitled Special Delivery, drops tonight.

But, thanks to a new sneak peek that VH1 itself let slip, it now looks like Joseline might actually be shifting franchises, and moving from LHHATL to Love & Hip Hop Miami before that show airs later this year. To hear Joseline herself tell it, she has some sensible reasons for wanting to relocate down Miami way–and, surprisingly, none of them have to do with being a big fish in a little pond on a new show:

It’s true that her relationship with Stevie has been nothing but high-octane drama since Joseline got pregnant with baby Bonnie Bella last spring. They’re actually still fighting their paternity battle in court, and it’s obvious that her resentment over Stevie first denying paternity still smolders. And it’s similarly true that a move to Miami would enable Joseline to put some of the rivalries for which she’s best-known behind her and focus instead on music, if that is indeed what she wants to do.

But there’s another reason it would be smart for Joseline to headline Love & Hip Hop Miami Season 1–since, of course, her addition to the cast would make her the headliner regardless of who else will be featured. If she were to join and the show did well, she could command a Keyshia Cole-sized contract for all future involvement: given that Keyshia is getting $1.5 million for LHHH Season 4, anything upwards of $1 million per season would be feasible. Love & Hip Hop Atlanta is the most successful in the franchise, but it’s also the most crowded–moving to Miami might better enable Joseline to distinguish herself and / or develop her brand.

(It’s worth pointing out that the move would also help the network. Love & Hip Hop Miami has reportedly gone through two cast makeovers already and is still struggling to get its formula just right. A big name like Joseline’s–particularly since she has ties to the city–would help stabilize the show.)

In related news, Joseline Hernandez’s after baby body was on display again this past weekend during a high-profile birthday bash the baddest boosh threw herself. (Yes, her birthday is in November, but Special Delivery airs in May. And all publicity is a good thing, right?) VH1 has an exclusive photo gallery here; Joseline herself shared a bevy of shots on social media, making it very clear that she’s way past any so-called pregnancy weight:

Fan site @badbooshnation_ chipped in with a few scintillating shots as well:

The moment you been waiting on! Tomorrow night!!! #mybaby #EP #executiveproducer #Bonnie'BellaSpecialDelivery Can't wait to y'all see #bonniebella Tomorrow night on Vh1 8 pm!!! I worked very hard on this I hope y'all enjoy it ❤️❤️❤️❤️#joselinehernandez #bonniebella #vh1 #lhhatl #puertoricanprincess

Kylie Jenner is trying to get ‘accidentally pregnant’ by Tyga (and bought a third mansion, just ’cause)