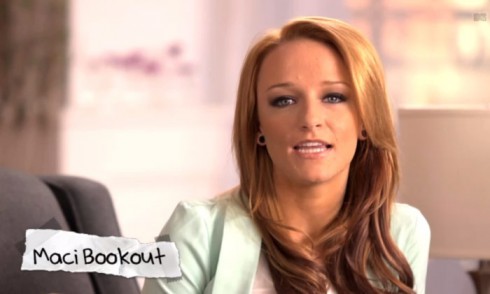 The future is looking really bright for former Teen Mom star Maci Bookout! In addition to being close to graduating from college, working on a book, and finally getting on good terms with her son Bentley’s dad, Ryan Edwards, the 21-year-old single mom has used her connections with MTV and her education in media technology to help land her a gig with her former employer as host of some of this season’s Teen Mom 2 after show specials on MTV.com.

Maci took time out of her very busy schedule this week to talk with Patrick Smith for his “Kill Your Radio” podcast, during which she answered a wide variety of questions about her experiences on 16 and Pregnant and Teen Mom, whether or not she is currently seeing anyone, her new job, and what else we can expect from her post-Teen Mom.

Here’s the audio of the full podcast. Maci Bookout’s segment begins right around the 16:50 mark, although I would recommend you just click “play,” if only to hear two Kentucky good ol’ boys telling Miles Davis and John Coltrane anecdotes. (I may have myself a man crush.)

Maci kicks off the interview talking about her new Teen Mom 2 after show hosting gig, explaining that she will be the host for the first two and the last two episodes. (So don’t panic when you rush to MTV.com after the third episode and find Maci has been replaced!)

The host tries to get Maci to reveal who her favorite Teen Mom 2 cast member is, but Maci gracefully dodges the question and points out that she relates to each of them in different ways. In contrast to her polite response, Maci tweeted this next photo of herself and Chelsea while they were in New York City together taping the after shows along with the words, “she my fav! election niiight in NYC. #selfiemirrorduck #sketchy ” 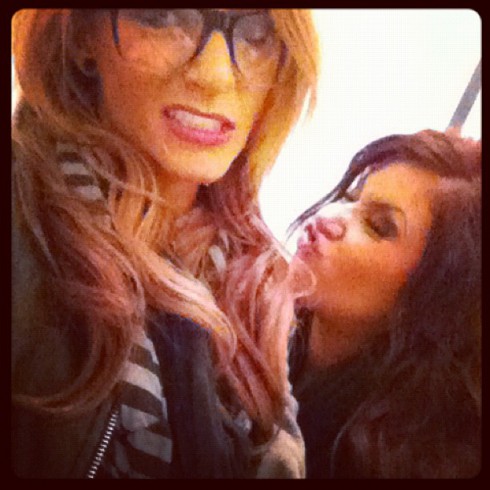 So what does Maci think of the spin-off rumors that surfaced prior to her announcement that she would be hosting for MTV. She says she thought the rumors were the product of Teen Mom being over and fans “hoping that me and Bentley would be back on TV, just because they loved to watch Bentley so much.”

Maci then seems to suggest that the door is still open for a future return to television with her own show. “It’s not that we’re not going to be back on TV with our own show or anything like that,” she says, “it’s just Bentley’s getting older, I’m trying to finish school, I’m almost done, and I’ve got a lot of career moves that I’m trying to do first before I jump right back into the TV thing, because it really takes up so much time and it is a lot of work. So, I’m just trying to get through some of my personal goals first before I make any decisions about being back on MTV with my own show.” So maybe we can all get to see Everybody Loves Bentley after all!

The host moves on from the softball questions and gets right to the good stuff: “I’m sure that everyone’s dying to know what your relationship status is,” he says.

“You know, I don’t even know what my relationship status is,” Maci says, laughing. “I am single. I’ve been single for four or five months now. It’s not that I don’t want to be in a relationship or that I’m avoiding it, it’s just that I’m so busy with Bentley, and work, and school, and everything that I’ve got going on.” She goes on to say that the past year has been time she has been able to focus on herself, but “when I get to a place where, like I said, I’ve met some of my personal goals and I’ve achieved things on my own, and me and Bentley are in a good spot, and things kind of settle with just the two of us, then I might think about being in a relationship again … But for now I really just want to focus on myself and get things done before I go through that again.”

Maci then talks about dealing with seeing herself on the cover of tabloids and reveals that “from the very beginning I made a vow to myself that I’m never going to read those things, and I’m never going to listen to the negativity or read things online about what people were saying, and I think that’s one reason why I’ve come so far, because I know that no matter what I do, I’m not going to be able to please everyone. So, as long as I’m pleasing myself and my son and my family, then I can’t do anything other than that.” 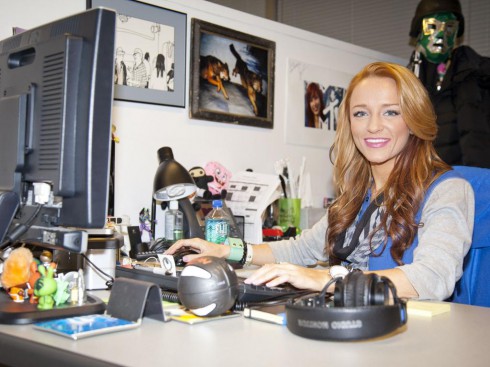 ^ Maci Bookout at work at the MTV offices

Maci also dishes on her favorite kinds of music and movies (You’ll have to tune in to find out what she says) and also reveals that she doesn’t watch a lot of television, but one of her guilty pleasures are The Real Housewives shows on Bravo! (You want to expand your resume and come write for us Maci?)

One fan asks about Maci and Ryan’s current custody agreement and Maci was very forthcoming. “During the week Bentley will go to Ryan’s house from Wednesday night at 6 until Friday night at 6. And then I’ll have him Friday night all the way until the next Thursday, and then he’ll go to Ryan’s on Thursday at 6 until Sunday at 6. And then the next week it’ll be Wednesday to Friday,” she says.

And speaking of Ryan, how is their relationship going? “Things with Ryan and I have actually been pretty smooth for a while now. I think we just both got to a point where we knew that if we didn’t get rid of the anger and stuff like that, we were never going to get anywhere. And we were almost just making it hard on ourselves. We’ve learned to communicate with each other instead of arguing and disrespecting each other,” a much wiser Maci reveals.

So what about remaining in the public eye, whether with a future reality show of her own, or just with her online presence on social media – can fans expect to be able to continue keeping up with Maci? “If I can continue to share my story and share my struggles, even after I’ve grown up a little bit, and after Bentley isn’t a baby any more … and if I can continue to help people, then that’s what I want to do. Even though it is very stressful and it’s very, very, very difficult to do all of the things that I do, I don’t think that I could turn my back on my followers and my fans and the people who look up to me.”

And Maci points out that her story will remain relevant even after Bentley is more grown “because it never gets easier, the struggles just change.”

As a parting shot, here is Maci at her new job hosting her very first Teen Mom 2 after show special!