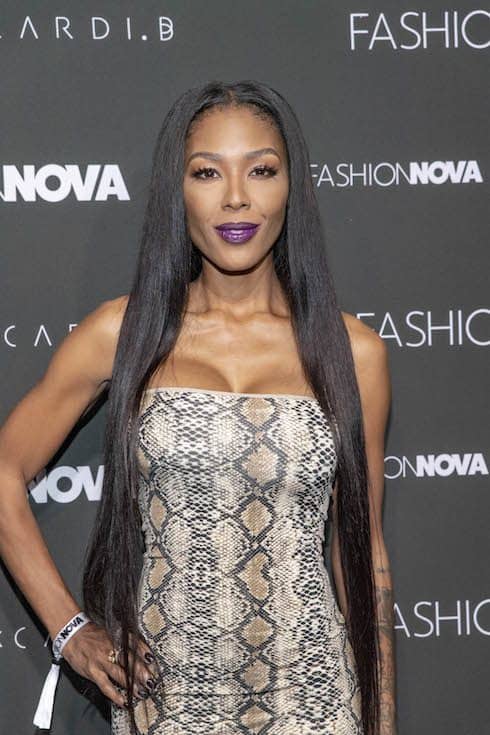 Hold up — is Love & Hip Hop Hollywood star Moniece Slaughter dating Scrapp DeLeon from LHHATL? And is Moniece actually joining the Love & Hip Hop Atlanta cast for Season 8? Crazy though it may sound, word on the street is that Moniece and Scrapp have been together on the DL for months — and now that Scrapp is returning to the LHHATL cast, he and Moniece have also been filming scenes together.

Starcasm was the first to report that Scrapp DeLeon is not actually out of prison. He’s been transferred to a halfway house in Macon GA, which is how he’s been able to film scenes for LHHATL Season 8. And originally it was believed that he’d gotten back together with his old flame and LHHATL co-star Tommie, after a new pic of the two of them together circulated earlier this year.

According to a new report from The Jasmine Brand, though, it’s actually Moniece Slaughter dating Scrapp DeLeon — and that’s not all they’re doing together. Per TJB’s article, anonymous sources claim that Moniece “will allegedly be on the upcoming season of” Love & Hip Hop Atlanta, because “she’s currently dating Scrapp DeLeon.”

Here’s where the equivocation really comes into play: Moniece and Scrapp “have allegedly been filming together and it’s likely viewers will see their relationship on the show” (emphasis added).

We’re pretty skeptical about this report, and for two reasons. First, Moniece is already done with Love & Hip Hop Hollywood. She’s announced that she’s done with the show for good and moved over to her music career full time. That in itself is no surprise: during LHHH Season 5, Moniece was literally begging to be let out of her contract, saying that Love & Hip Hop had “sucked the life out of” her. Not long after, VH1 appeared to be pushing Moniece out of the cast.

And second, Moniece herself shot down the rumor that she was dating Scrapp not long ago. In a response to an Instagram comment about the rumor (which got new exposure thanks to the aforementioned pic of Scrapp and Tommie), Moniece said she was only interested in women, and would likely never date someone with as much baggage as Scrapp.

Of course, Moniece said all that a lot more emphatically. Here’s a screenshot of her full comment, originally posted by TSR and preserved via @JTReality: 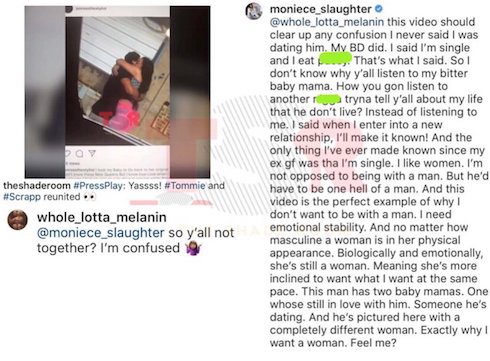 But having said that: Strange things happen in reality TV all the time! We won’t be surprised if it turns out that Moniece Slaughter dating Scrapp DeLeon is the simplest thing about LHHATL Season 8. And we don’t have long to wait before finding out: the season premiere drops Monday, March 25th at 8 PM on VH1.