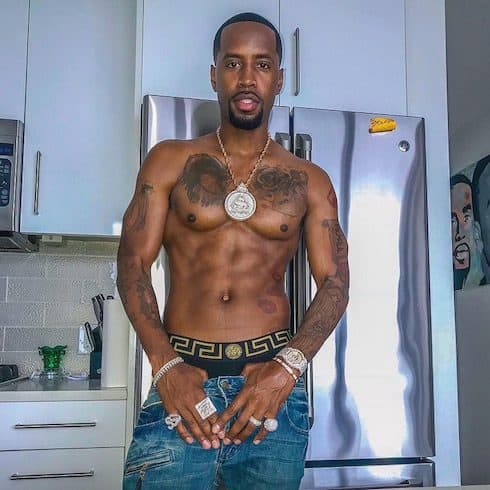 The timeline gets a little wonky thanks to the delay between things actually happening in real life and their filmed versions appearing on reality TV. To break it down: last February, Safaree’s junk went viral. By August, he’d partnered with noted sex toy manufacturers Doc Johnson on an alleged million-plus dollar deal: he would provide a mold of his “Anaconda,” and Doc would do the rest. The company began taking pre-orders, and the toy was supposed to be available for purchase by Valentine’s Day of this year.

Except on a recent episode of Love & Hip Hop New York, Safaree appeared to be reconsidering the deal. His mother advised him against it (which you’d almost expect); Papoose and Remy, in a separate conversation, also told Safaree that a sex toy would be bad for his career.

Evidently, that was enough for Safaree. In a confessional from the show’s most recent episode (which aired just before Valentine’s Day), he claimed he’d been let out of his contract with no hard feelings — and no financial penalties:

I’ve been struggling with the whole back and forth if whether I should go through with this whole sex toy deal or not. But, at the end of the day, I don’t feel like it’s me. Thankfully Doc Johnson was nice enough to let me out of my contract and I’m 100 percent free. It does sting a little bit that I’m going to miss out on a million dollars.

But something about this whole Safaree contract deal doesn’t rattle right. For one thing, Doc Johnson is still letting people sign up to be notified when Safaree’s “Anaconda” (seriously, that’s what they’re calling it) will be released. For another, the company was said to have ramped up production of the sex toy something fierce due to the overwhelming number of pre-orders they got upon announcing it last summer.

So, did Doc Johnson already have a ton of dildos waiting to be shipped, and hundreds of thousands of dollars in pre-order cash waiting to be deposited…and just let Safaree out of his contract with no worries? Or — and again, this is why the timeline is important — was the whole thing just a PR stunt from the beginning? Which outcome seems more likely: that Doc Johnson was happy to let Safaree and literal millions of dollars in potential future profits walk out the door with a smile? Or that all the company ever wanted was a little mainstream attention via Love & Hip Hop New York‘s most famous cast member since Cardi B?

It’s not the only fishy storyline involving Safaree from the past couple of weeks. A few days ago, he reportedly bailed on filming the Season 9 reunion, only to arrive at the literal last minute after VH1’s lawyers threatened him with a breach-of-contract lawsuit.

Who is the Double Dick Dude? Is he real?