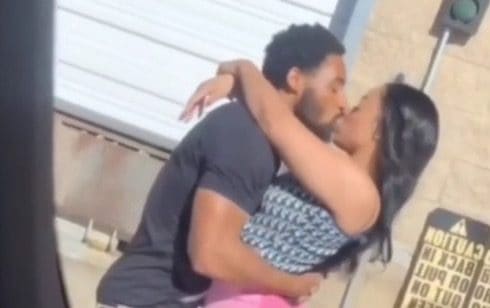 One of them may be headed for prison, the other is almost out — but are Love & Hip Hop Atlanta co-stars Tommie and Scrapp DeLeon back together regardless? A new video of the two of them kissing passionately has rumors flying, and fans wondering whether Scrapp has been freed from prison. We know for sure that Scrapp is still incarcerated; as for he and Tommie’s relationship status, it’s anyone’s guess.

Last autumn, talk of Scrapp DeLeon free from prison began to spread like crazy after a few photos of Scrapp alongside some of his LHHATL co-stars made their way online. As we explained at the time, that talk was mistaken: Scrapp is still listed as an active inmate by the Georgia Department of Corrections, and is currently living in a halfway house in Macon.

So it seems likely that the video of Tommie and Scrapp was filmed somewhere in the vicinity of Scrapp’s current residence. Based on the pair’s hairstyles and general appearance, the footage is clearly new. And based on their tight embrace, the love they once shared is clearly still there.

Here’s the video of Tommie and Scrapp together, via @toriwiththetea1:

After the gossip began to rise, Tommie explained what went down in one of her IG stories. According to her, the ongoing legal difficulties that have her facing 54 years in prison mean she’s “not been in the best place emotionally,” and she needed “to see my old friend” Scrapp to get her head right.

Tommie didn’t confirm or disconfirm that she and Scrapp are back together, saying only that “today was the first time I was actually in a good place” over “the past few weeks.”

Love & Hip Hop Atlanta Season 9 is expected to debut in the spring of 2019; it’s not clear how many episodes Tommie will appear in, or whether she’ll be featured on the show at all. Scrapp DeLeon is still scheduled for release from prison in January of 2021.

VIDEO – The conspiracy theories of Evi and Randy Quaid