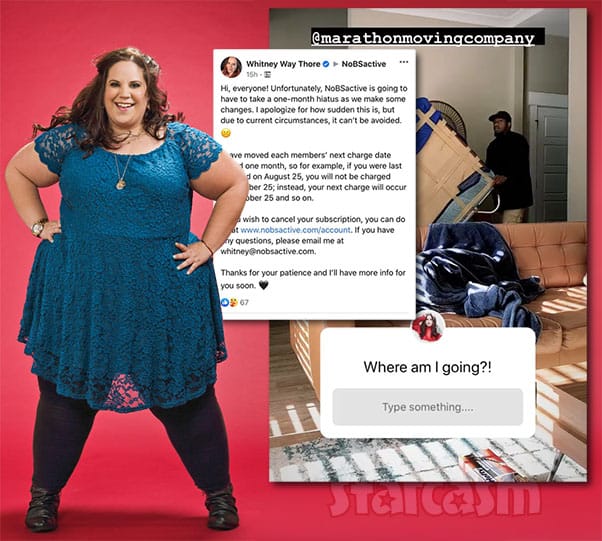 My Big Fat Fabulous Life star Whitney Way Thore is moving again! The 36-year-old reality star made the announcement on Instagram earlier today, just a few weeks after she announced that her No BS Active online workout program was taking a one-month break.

Whitney made the move reveal in a series of Instagram story teases. She began with a photo of her houseplants bunched together as she asked her followers why they looked like that. “Wonder what’s happening today!” she added.

In the next post, she dropped a lightly more obvious hint for her followers whose minds were not in the gutter. “I haven’t had this many men in my house since…” she captioned a masked selfie, along with the 🐵, 🙈 and 🙉 monkey emoji. “There’s a lot of grunting and everybody’s packing,” she added suggestively.

One follower guessed that Whitney was either filming or moving, to which Whitney replied: “We are finally NOT filming! Season 8 airs so soon!”

Another follower narrowed the guesses to just moving, and Whitney confirmed the answer with a series of bell emoji. She then posted a brief video clip of a man from Marathon Moving Company using a dolly to move a large piece of furniture wrapped in blankets.

WHERE IS WHITNEY THORE MOVING?

Whitney opened the floor to guesses as far as where she is moving to. The guesses she replied to included Paris, Morocco, England, Alaska, and California. She shot down all of the international guesses, but didn’t rule out California or Alaska with her responses.

One follower asked if Whitney was moving back in with her mother Babs and dad Glenn. “I’m obsessed with them but…” Whitney responded.

Another asked if Whitney was moving in with her “Boo Bear” Buddy Bell, which seems unlikely given that Buddy looks to have a new girlfriend. “@thebuddybell? Can I move in?” Whitney replied. (UPDATE – Buddy shared Whitney’s question and answered: “Bring it!”)

Given that Whitney is using Marathon Moving Company, which is a local moving company located in her old hometown of Greensboro, North Carolina, I am guessing that she is moving back to the Greensboro area. That is purely a guess though. She states that she used Marathon for her previous move to Charlotte, so it wouldn’t be too crazy to call on them again, even if she was moving from Charlotte to another part of the country.

WHAT HAPPENED TO NO BS ACTIVE?

Hi, everyone! Unfortunately, NoBSactive is going to have to take a one-month hiatus as we make some changes. I apologize for how sudden this is, but due to current circumstances, it can’t be avoided. ☹️

I have moved each members’ next charge date ahead one month, so for example, if you were last charged on August 25, you will not be charged September 25; instead, your next charge will occur on October 25 and so on.

If you wish to cancel your subscription, you can do so at www.nobsactive.com/account. If you have any questions, please email me at whitney@nobsactive.com.

Thanks for your patience and I’ll have more info for you soon. 🖤

DID WHITNEY AND RYAN FALL OUT?

It’s unclear what the “certain circumstances” are that required a one-month (at least) hiatus, but many are speculating that it may be some sort of falling out between Whitney and her No BS Active partner Ryan. Six days before Whitney’s hiatus announcement, Ryan teased a new business partnership with his mom, Natalie.

Five days after the No BS Active hiatus announcement, Ryan confirmed that the new business project with his mom is a customized fitness app. Here is the Facebook announcement from Natalie:

In addition to announcing a new fitness project with someone else, Ryan also got some fans of the show riled up by posting a rather happy photo with Whitney’s ex-fiance Chase Severino and his newborn baby daughter Aurora on Instagram:

The photo inspired some defensive comments from Whitney’s fans, and Ryan was quick to reply to some of them:

COMMENTER 1: This must be like a knife in Whitney’s heart. 😢

RYAN: Shut up this is a picture of a baby. Get outta here.

COMMENTER 1: Damn I was just thinking of what Whitney must feel and the heartache knowing and maybe seeing pic like this. No need to get nasty. I didn’t say it was inappropriate to post or anything. Babies are always a blessing and she’s adorable. I’m sure you are a proud uncle and Chase a proud father.

COMMENTER 2: Yes you’re right it is a picture of a baby however very insensitive to post it online after what happened.

RYAN: Then unfollow me clown.

RYAN: I posted a picture of my best friends with his baby. You read all these comments and are saying I’m the one that isn’t nice? Are you seeing ok?

It sounds as though filming has ended for the new season of My Big Fat Fabulous Life, so I don’t know if we will get an answer to either of these questions when the show returns to TLC on Tuesday, November 10 at 9/8c on TLC.

My Big Fat Fabulous Life: Will Whitney and Buddy end up together?