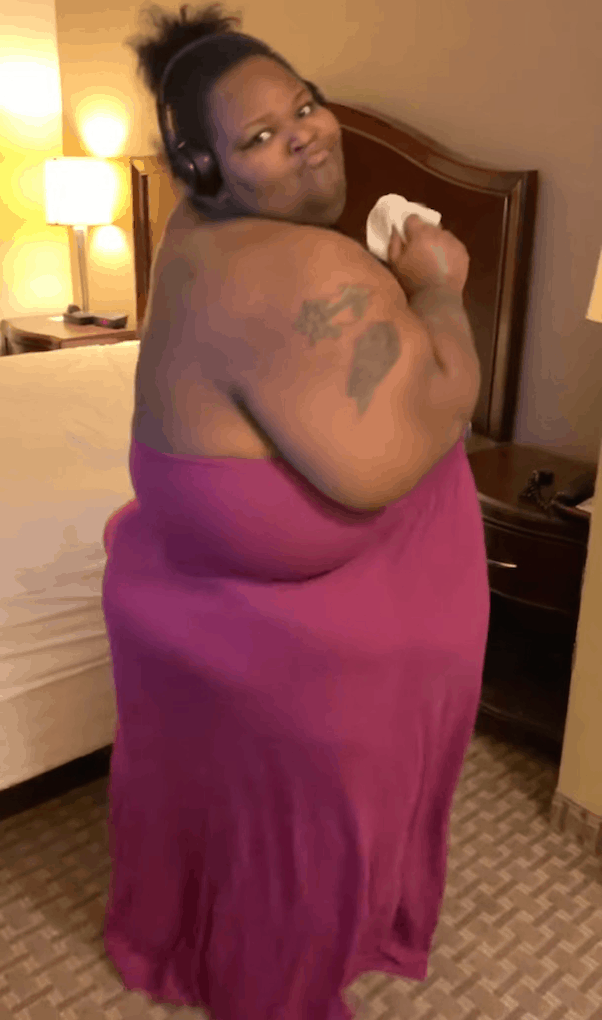 Controversial My 600 Lb life star Schenee Murry is back with another round of weight loss claims, and she’s shared a twerking video to try and prove them. Schenee posted the clip in response to gossip that her weight was back around the 800-pound mark — so how much weight did Schenee Murry lose since we last heard from her? The answer, unsurprisingly, depends most of all on your point of view.

It’s actually been a pretty busy year for Schenee, whose social media presence is undiminished though she’s said multiple times that she won’t be filming a Where Are They Now? episode. When last we checked in with her, Schenee appeared to be near death following another in a long string of hospitalizations. (At the time, Schenee had just learned of her grandmother’s death.)

Before that, we reported on the numerous eating contests Schenee was particpating in and the mukbang videos she was uploading from her hospital bed. But at the beginning of 2019, Schenee was telling her followers that she’d managed to drop a whopping 250 pounds from her peak My 600 Lb Life weight of 780. And month later, Schenee was claiming she’d actually lost 300 pounds. (For the record, both times Schenee has shared pictures of a scale showing her alleged new weight in 2019, Schenee herself has not also been visible in the images.)

Which brings us back to the original question: How much weight did Schenee Murry lose? Since she’s spent so much time in hospital beds this year, it seems a sizeable portion of Schenee’s followers have begun voicing their skepticism that she’s lost any weight at all. Schenee took offense to this, and, as she often does when filming her frequent YouTube updates, decided to address the skepticism head-on. One of her most recent videos, entitled “Who 800 pounds still lol y’all a good one,” features Schenee standing under her own power, asking the hypothetical viewer if she looks like a woman who weighs 800 pounds — and then twerking, to the audible delight of her husband Freddy.

Here’s the increasingly infamous clip, followed by a complete transcript of Schenee’s remarks:

It also appears that Schenee’s weight loss clip above is part of a bigger attempt at reworking her brand. In Schenee’s most recent video upload, a clip entitled “The start over ! MY Life after 700 pounds,” she says she’s founded a company called Journey On The Go LLC and is at the mall with her dog to pick up some new T-shirt designs. (For the uninitiated: “Journey On The Go” is also the name of Schenee’s YouTube channel.)

Overall, Schenee seems more optimistic than usual in the new clip. But, as fans and detractors have pointed out, Schenee’s hair in the video is in the style she wore it in for several months earlier this year. Furthermore, Schenee is wearing a sleeveless shirt in the second video; the general speculation is that the clip could be an older one that she uploaded simply for content purposes.

Finally, Schenee’s GoFundMe remains stuck at $290 of her $50,000 goal. Though she hasn’t received a new pledge in at least six months, Schenee was at $5 when we first wrote about her GoFundMe almost two years ago. At her current average rate of $15 pledged per month, Schenee would need 3,314 more months to meet her goal. So January of 2296 should be a happy month indeed.

(Photo credits: How much weight did Schenee Murry lose via YouTube)