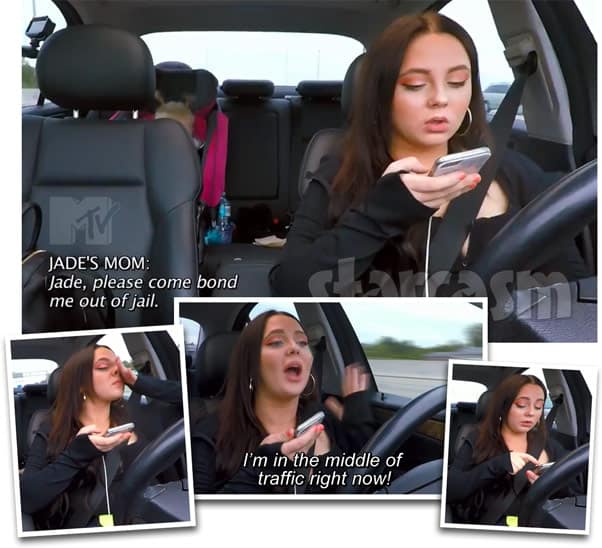 MTV moved Teen Mom: Young and Pregnant star Jade Cline to Teen Mom 2 in hopes that she could help fill the immense train wreck void left by perpetual ? show Jenelle Eason. Viewers have already seen Jade involved in multiple outside-voice altercations, but this week we have the first actual arrest when Jade finds out her mother Christy has been busted for meth possession.

Jade mentioned during the official announcement of her addition to the cast that MTV cameras were rolling when she found out that her mom was arrested. In a preview clip for this week’s episode we see the moment thanks to the in-camera GoPro cameras in Jade’s car.

Jade is driving her daughter Kloie home from the park when she gets the call from her mom at the Marion County Jail. “Jade, please come bond me out of jail,” Christy pleads.

Jade explains that she doesn’t have $500 as the situation escalates. Jade gets angrier and she can be seen speeding down the highway with no hands on the steering wheel multiple times as she insists on holding her phone in one hand despite being on speaker phone. (I assume her Mercedes is too old to have blue tooth?)

The single mom was shown on the phone with both hands off the steering wheel numerous times in last week’s episode as well. In that scene, Kloie was in the back seat and it was raining pretty hard. I should note that if you are over 18 you are legally allowed to use your phone while driving as long as you are not texting. Lawmakers are currently trying to pass a law to change that.

Getting back to the preview recap, Jade tells her mom that she will talk to other people and try to get the bond money together before eventually ending the call with “I love you.”

On Tuesday's new #TeenMom2, @jade_desere gets an unexpected call from her mother to bail her out of jail. ? pic.twitter.com/aRHPBy7oc7

As we were the first to report, Teen Mom 2 star Jade Cline’s mother Christy and her stepdad Corey (real name Michael) were both arrested in May on charges that included meth and marijuana possession. According to an affidavit in the case, police were called about a possible overdose after someone saw Christy and Corey asleep in their vehicle.

The two were waking up when police arrived, and officers would eventually find marijuana, four pipes, meth, and suboxone.

Thankfully for Christy, all of the charges against her were dismissed on August 14.

Teen Mom 2 ratings have continued to decline after Jenelle’s departure, with each of the last three episodes bringing in less than 700,000 viewers. A seemingly obvious reason for the decline is actually a positive thing for the original cast members as Chelsea, Kail, and Leah are all financially well off and essentially stable (to varying degrees) in their personal lives.

One of the major complaints from viewers this season has been the fact that the story lines for the orignal moms has been a mix of tropical vacations, home buying, and business ventures. Former Teen Mom 3 star Briana DeJesus still has some baby daddy issues, but even that has been anything but dramatic.

MTV summed up the show’s issues in this regard perfectly with a different preview clip for this week’s episode:

The moms are on edge when #TeenMom2 continues next Tuesday, followed by a brand new Teen Mom: #YoungAndPregnant. ? pic.twitter.com/T7GkpsYg6K

KAIL: Waiting to get an email to find out if her bid on another new house was accepted.

LEAH: After Ali returns from camp, Leah tells her three daughters that she doesn’t feel right if they’re not all with her.

CHELSEA: Feels way out of her comfort zone deciding what kind of flannel to use for her new clothing line.

BRIANA: Devoin has only seen Nova twice since “the pool incident.”

JADE: Gets a surprise call from her mom asking for bond money after being arrested for meth possession and more.

Here are screen grabs and actual quotes from the preview clip for this week's episode of #TeenMom2. Can you spot the real drama? ? #OnEdge

Is it any wonder that MTV called Jenelle for a meeting last week?

All of Courtland Rogers’ mug shot photos to date