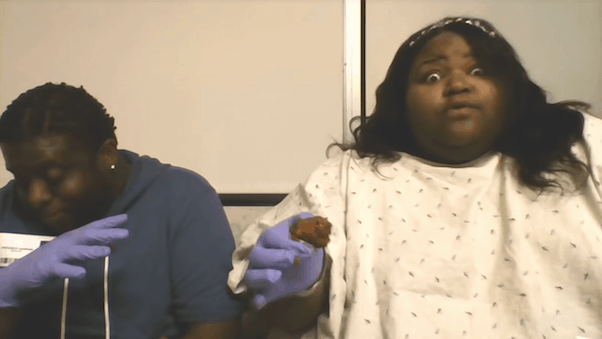 My 600 Lb Life cast member Schenee Murry is still up to her controversial ways. This time, rather than a $50,000 GoFundMe or an eyebrow-raising weight loss claim, Schenee has shared a video of herself and her husband Fred engaged in an eating contest from Schenee’s hospital bed.

Schenee was rather infamously kicked out of Dr. Nowzaradan’s weight loss program following her My 600 Lb Life debut back in Season 6. Since then, Schenee has spent a considerable amount of time hospitalized with an assortment of blood and respiratory issues. The last time we checked in with her, Schenee was telling her social media followers that she’d lost “almost 300” pounds from her peak weight of 780. However, while she’s shared at least a couple of photos of scales registering lower weights, Schenee has yet to post a photo of herself on those scales — an omission that’s led to plenty of speculation and gossip.

As for this Schenee Murry eating contest video: according to Schenee, she and Fred filmed the 20+ minute clip after one of their YouTube followers challenged her to try and withstand the fury of the “Atomic Boneless wings from Wingstop.” In high theatrical fashion, Schenee Murry’s hot wing hijinks also involved a pair of purple rubber gloves for herself and Fred. Also, at several points throughout the video, a woman who Schenee refers to as her PCA (Patient Care Assistant) can be heard laughing and commenting off-camera.

It pretty much speaks for itself; without further ado, then, here’s the video:

We should point out that though it was only pointed out to us recently, and didn’t begin making the social media rounds what looks like a couple of weeks ago, the video is actually a few months old. Since then, Schenee has remained largely hospitalized, and even stopped sharing new videos earlier in the summer — which led her followers to wonder whether Schenee’s health had taken a serious turn for the worse.