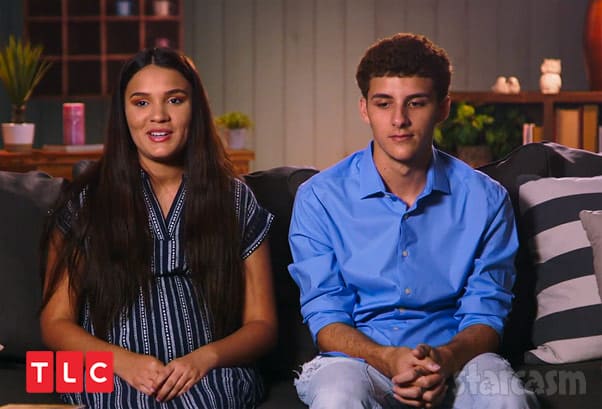 The arrest occurred after after Rilah and her mother Rosa made numerous posts on social media about Anthony being abusive towards Rilah. In addition to a photo of a bruise on Rilah’s leg, the two also shared a video of Anthony talking about taking their daughter Malayah away from Rilah, and another video of Anthony screaming at Rosa while police held him back.

Anthony’s arrest stems from the same incident, although it was a week later before he was booked. The 18 year old was booked on Monday, October 28 and charged with misdemeanor battery domestic violence. Anthony’s mother Rebecca posted his $500 bond the following day and he was released. His next scheduled court appearance is November 26.

According to Rilah’s statement to police, everything started on Sunday, October 20. Rilah says she was in the back seat with her daughter Malayah and Anthony was driving. The two began to argue after Rilah informed Anthony that she was ending their relationship. “Anthony became upset and started to drive erratically as he yelled at her,” the report reads. “Rilah described his driving as swerving and speeding. Rilah attempted to call her mother, but Anthony snatched the phone from her hands and placed it into the passenger glove box.”

Anthony eventually pulled into an abandoned gas station and called his mother, at which point Rilah was able to reach her phone and “yell for help as Anthony attempted to cover her mouth to silence her.”

Rilah says Anthony exited the vehicle, opened her door, grabbed her legs and tried to forcibly remove her from the back seat. Rilah was able to prevent him from forcibly removing her by grasping Malayah’s car seat.

Anthony eventually gave up and returned to the driver’s seat before then driving to the couple’s initial destination — a community fest event at a local church.

Upon arrival Anthony took their daughter and refused to give her back to Rilah. Rilah made contact with unknown officers working the event. Rilah failed to tell the officers what had occurred and only wanted to get her daughter back. The officers advised this was civil matter between the parties. Rilah decided to pretend everything was alright between her and Anthony. She began to tell Anthony that she loved him and they could work this out. Anthony drove Rilah back home in Deltona, and gave her back their daughter. Anthony left from there to an unknown location.

Anthony shared a slightly different version of what happened. He told police that Rilah began hitting him from the back seat while he was driving, and that’s when he pulled into the gas station. He admitted to trying to remove Rilah from the vehicle. “Anthony stated, Rilah attempted to defeat his actions by kicking him.”

While Anthony awaits his next scheduled court appearance, he has been equipped with an EMPACT monitoring device. He is not allowed to have any contact with Rilah or to be at her address. (There are actually two different addresses listed, both of them residential. I don’t know if this is an indication that Rilah has since moved out of her mother’s house or not.)

UPDATE – We now have Anthony’s mug shot photo from the arrest. Plus, on November 6, the Florida State Attorney’s office officially filed charges against Anthony indicating that they do intend to prosecute. Click the link for all the latest, including Rilah lashing out at Anthony’s new boo from California that he met on Instagram!

It does not appear that Rilah or her mother Rosa have mentioned Anthony’s arrest on social media, but that could be because of their contracts with TLC. rilah has stated that she will not be returning for another season, but they would still be held to their NDA while the current season is still airing.

The Unexpected Season 3 Reunion will air this Sunday, so perhaps we will hear more from Rilah and Rosa soon. Stay tuned!