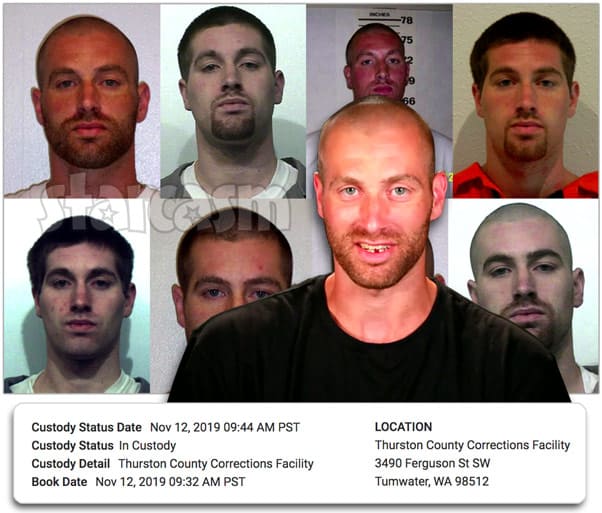 Within two weeks of having two different warrants issued for his arrest due to skipping out on court dates, Love After Lockup star Matt Frasier is back behind bars.

Jail records indicate that Matt was booked into Thurston County Jail on Tuesday and he is still in custody at the time of this post. Given Matt’s rather extensive history of running off, I assumed that he would be held without bond.

Of course, having a bond amount set and finding someone willing to post it are two different things. Motions have already been filed to forfeit Matt’s previous bond from his two cases.

For those of you who missed it, Matt skipped out on a trial confirmation hearing for his possession of a stolen vehicle charge on October 31, and he was a no show at his arraignment on November 5 stemming from the heroin possession and stolen credit card charges. (You can get details on all of Matt’s arrests via links in the timeline below.)

I would have to assume that if someone does post Matt’s bond, he will be given an ankle monitor this time around.

UPDATE – Matt bonded out of jail on Thursday, November 14.

Thanks to all of Matt’s shenanigans, his pending cases look to have been combined as they are both now scheduled for a trial on January 6. That will be a little more than a year after Matt was initially arrested on the possession of a stolen vehicle charge on January 4 of this year.

Here is an updated timeline for most all of Matt’s legal issues since his prison release documented on Love After Lockup Season 2:

NOVEMBER 12 – Matt arrested and booked into Thurston County Jail. His combined bond amount appears to be set at $9,500.

LOVE AFTER LOCKUP Matt ran from police, jumped out of a moving stolen vehicle in 2013 meth arrest