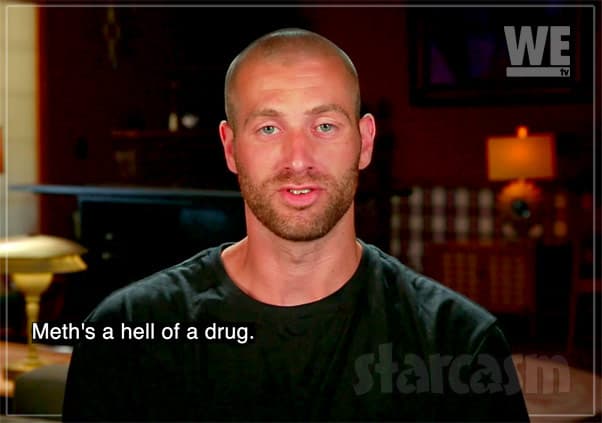 In the latest addition to “The Frasier Files,” Love After Lockup bad boy Matt Frasier was back behind bars again this weekend, after he was arrested on Friday and charged with meth possession.

According to the arresting officer, Matt was pulled over Friday night in Tenino, Washington because the vehicle he was driving had expired tags. The officer asked Matt for his license, registration, and insurance, and Matt informed the officer he had none of those items. He did, however, have his Washington state ID.

More from the arresting officer’s report:

I went back to my patrol car and ran Matthew through my MCT and it stated that he was DWLS 3rd. I returned to the vehicle and got him out of the car. I told him he was under arrest for DWLS 3rd and placed him into handcuffs, checked for fit and double locked them. I took him to the back of his car and searched him incident to arrest. In his left front jeans pocket I found a small green and clear baggie containing a white crystal substance. I placed it into an evidence bag and finished my search. I found nothing else of evidentiary value. I placed Matthew into the back seat of my patrol car and the evidence bag containing the small baggie into the [trunk] of my patrol car.

The officer ran a field test on the “white crystal substance,” and it came back positive for methamphetamine. So, in addition to being cited for driving with a suspended license and expired tags, Matt was later booked on a charge of possession of a controlled substance.

According to jail records, Matt bonded out on Tuesday.

The arresting officer also reveals in his report that there was an unidentified woman with Matt in the vehicle. “I talked to the passenger and asked her if she had a license to drive the car away,” the officer states. “She said that she did not. I asked her if she had someone to call who could come get the car within the next 30 minutes. She said no and left the scene.” The vehicle was later towed.

Matt has a great fondness for stolen vehicles, but there is no indication that the vehicle he was in was stolen. It does seem odd to me that the woman claimed to not know anyone with a driver’s license who could come and get the vehicle, and then just yeeted out of there! Of course, there are lots of potential explanations for the oddity other than the vehicle being stolen.

Unfortunately, fans will not be able to see all of this unfold on Love After Lockup: Life After Lockup. Matt and Caitlin are the only couple from Love After Lockup Season 2 not coming back for the new spin-off series premiering June 14. If you’re curious about whether or not Matt and Caitlin have gotten back together, the answer to that is no. Unless we are all being bamboozled on social media and that was actually Caitlin bailing on Matt Friday night! 😉

Be sure to check out these previous installments of “The Frasier Files:”

Get details on #LoveAfterLockup star Matt Frasier's 2013 meth arrest after he jumped out of the stolen truck he was driving while it was still moving in the latest edition of #TheFrasierFiles https://t.co/UyUpKFhycI