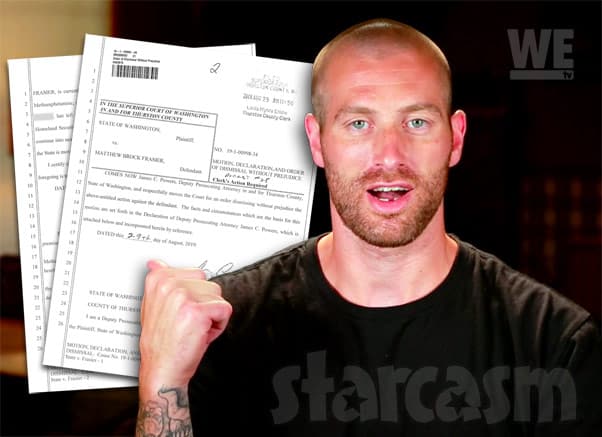 Troubled Love After Lockup star Matthew Frasier got a rare bit of good news late last month as the meth possession charge stemming from his May 24 arrest has been dismissed for a rather unexpected reason. Despite the dismissal, Matt is still scheduled to go to trial for possession of a stolen vehicle (and potentially other charges?) in November.

The dismissal of the meth possession charge happened on August 29, and it’s all because the arresting officer got a better job! According to the motion and order of dismissal, the officer who pulled Matt over and found the baggie of meth in his pocket “has left the Tenino Police Department for a position within the Federal Department of Homeland Security, and for that position has begun a training program out of this state which will continue into next year.”

The order continues to explain that the officer “is a necessary witness in this case, and due to his extended unavailability, the State is moving to dismiss without prejudice.”

The motion was granted, and the charge was dropped.

Two days prior to the motion to dismiss the meth charge, there was a motion for a continuance on Matt’s trial date for possession of a stolen vehicle, which was supposed to happen earlier today (September 9). The reason for that motion was also because of the absence of the arresting officer, but this time it was only temporary.

That motion was also granted, and Matt’s new trial date is set for November 12.

Those are all charges that Matt has previously been convicted of, so I am guessing that Matt must have still been on probation at the time of his January arrest, which has resulted in those charges being re-activated.

Matt recorded for Love After Lockup: Life Goes On just after the meth possession arrest, and he stated that he was facing up to ten years in prison at the time. I assume that number is a bit lower with the meth charge being dropped, but it’s hard to imagine him being able to dodge doing at least a couple years behind bars on the possession of a stolen vehicle charge — especially given his extensive criminal history.

We will continue to monitor Matt’s case (as well as any new arrests), and we will update if there are any major developments. Meanwhile, it appears as though he will have at least two more months to sip Corona and wheel his current girlfriend around in a wheelbarrow!

I combined two of my favorite things: Bob Dylan and #LoveAfterLockup! #HomemadeTikTok