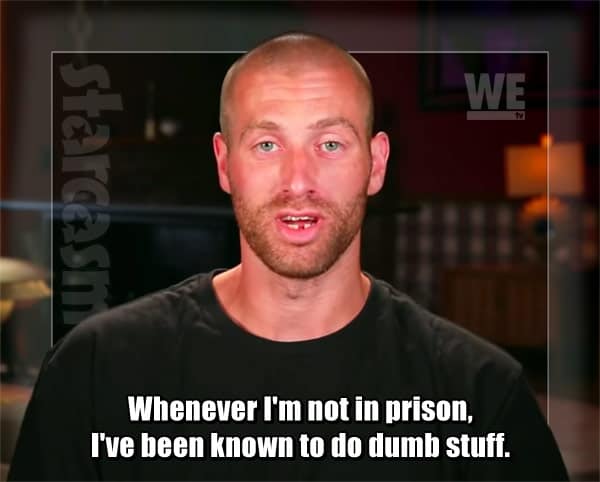 The last time we checked in with Love After Lockup star Matt Frasier he had just received a rare bit of legal good news. The 29-year-old’s meth possession charge from May was dismissed because the arresting officer was unable to be at his trial after being promoted to the Federal Department of Homeland Security.

Unfortunately, Matt is right back to generating legal bad news as he was arrested last week for heroin possession and stolen credit cards — less than two weeks before his scheduled trial for possession of a stolen vehicle.

According to court documents, Matt and his girlfriend were arrested at a Motel 6 in Thurston County, Washington last Friday. (I have redacted Matt’s girlfriend’s name from this post, but I just want to assure everyone that it is not Caitlin.)

The arrests were the result of a police investigation after a woman reported that her purse had been stolen out of her car, which was parked in her closed garage overnight. In addition to cash, gift cards, and keys, the purse also contained several credit cards.

Purchase records for the stolen cards after the burglary listed numerous purchases, including more than $2,300 spent at Walmart and $8.39 at a Redbox kiosk. Here is the list of purchases (and attempted purchase) made with the stolen cards:

The investigating officer obtained the Walmart security camera video recorded during the purchases. “The footage showed a white male with a beard wearing a grey North Face sweatshirt along with a blue Seahawks hat, and a white female wearing a white and pink stocking cap. Deputy King immediately recognized the male as Matthew Frasier due to recent contacts.”

The officer reached out to a neighboring police department “because he had learned they had recent contact with Matthew Frasier and his girlfriend…on 10/11/19 at the Ramada Inn. Deputy King was informed [Matt’s girlfriend] and Matthew have been staying at the Tumwater Motel 6.”

The officer then received photos taken by the Target security cameras. “The photos included Matthew Frazier wearing a Seahawks hat and a female with long blonde hair. They were driving a red mid 2000’s Mazda with a dent in the back-passenger bumper.”

Inside the motel room, Deputy Kind observed a purse sitting on the floor that matched the photo Monti sent him of [the burglary victim’s] purse that was stolen on 10/15/19. Deputy gained a search warrant for the Mazda and motel room. The deputies searched the motel room and located multiple social security cards belonging to other people and Frasier and [his girlfriend’s] identification cards on the night stand. Under the night stand was a green skull and inside of the skull was a large amount of brown tar. Sgt. Casebolt recognized the brown tar substance as heroin based on his 24 years of law enforcement training which included five years working on the Thurston County Narcotics task Force.

Both Matt and his girlfriend posted bond and were released on Monday.

Matt’s possession of a stolen vehicle case (separate from his previous conviction for the same charge) was scheduled for trial on October 31. It’s unclear if the new charges will delay the trial once again.

Here are all the details on #LoveAfterLockup star Matt Frasier's 2019 arrest for possession of a stolen vehicle. https://t.co/fRPuse9XCG

LOVE AFTER LOCKUP Lizzy and Daniel spoilers: Are they still together?