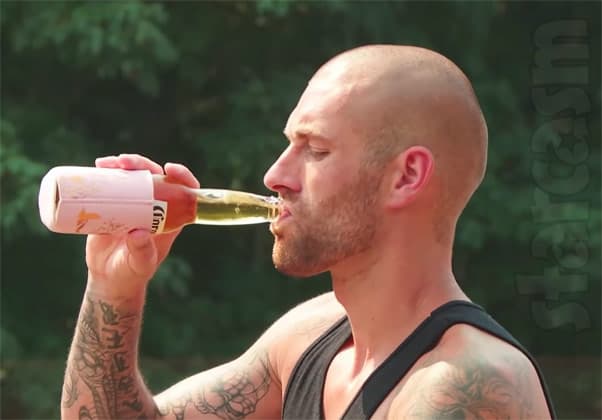 It’s been a while since we last checked in on Love after Lockup star Matt Frasier. For those of you curious what he has been up to lately, the answer appears to be more of the same as he was arrested twice this week on separate charges.

Matt first returned to jail on Wednesday with online records indicating that he was booked on charges of failing to register a vehicle title within 45 days as well as driving with a suspended license. The Thurston County Sheriff’s Office website actually listed three separate charges of driving with a suspended license and two charges of failing to transfer a title. I’m unsure if that was an error or not.

Whatever the total bond was, Matt posted it and was out the same day. Unfortunately for him, his reclaimed freedom would not last long.

The very next day, on January 16, Matt was arrested again — this time for meth possession.

According to the probable cause affidavit, police arrived at an address in Olympia to help apprehend a wanted man that wasn’t Matt. They found two men in the driveway, including Matt — who was “halfway in the driver compartment of a Silver Honda working on repairs” at the time.

The officer and a Community Corrections Specialist asked for Matt’s name, and he told them. “This name was familiar to me and I had independent knowledge that he has been arrested for crimes of Possession of Stolen Vehicle as well as multiple drug offenses,” the officer states in the affidavit.

Matt was asked if he had any outstanding warrants, and he replied that he had just taken care of them in court earlier that day. Unfortunately for Matt, he must not have taken care of them completely. “I checked Frasier for outstanding warrants through Washington State Patrol Communications,” the officer reports. “Frasier had a misdemeanor warrant return out of Chehalis for DWLS. I requested confirmation of the warrant through communications.”

After confirming that Matt had an outstanding warrant, the officer read him his rights and searched his person. When searching Matt, the officer “located a small lump in his right front pocket.”

I transported Frasier to the Thurston County Jail and booked him in for UPCS Methamphetamine. Frasier made several statements while en route the jail. “I can’t get booked in on a meth charge, man.” “It’s just a small bag of meth.”

The white crystal nugget weighed 2.0 grams and “yielded a positive reaction for methamphetamine” when field tested.

This time around it appears that Matt spent the night in jail before posting bond yet again the following day.

Matt is still awaiting trial on multiple charges, including possession of a stolen vehicle (from January of 2019) as well as heroin possession and possession of stolen credit cards (from October of 2019).

Here is an updated timeline on most of Matt’s legal issues since his release from prison documented on Love After Lockup: