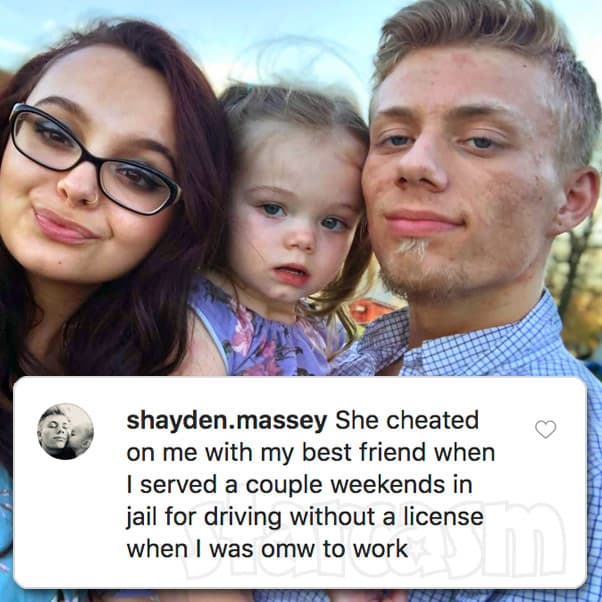 The TLC cameras have not been following former Unexpected couple Lexus Scheller and Shayden Massey for some time now, but that doesn’t mean their lives have any less drama. If anything, it seems like they may have more!

The young parents haven’t been sharing any photos or videos together on social media lately, which had a lot of their followers asking if they were still together. Shayden apparently had enough with the influx of curiosity, and he took to Instagram to clarify their current relationship status.

“To those who won’t quit asking, No!, we’re not together anymore,” reads a text graphic posted by Shayden earlier today. He clarified further in the comments, revealing that Lexus allegedly hooked up with his best friend while Shayden was behind bars! “She cheated on me with my best friend when I served a couple weekends in jail for driving without a license when I was omw to work,” Shayden wrote.

Shayden’s announcement had folks asking a lot of questions, and he took the time to reply to a few of them.

Another commenter made a reference to Lexus cheating on him before, and Shayden shook his damn head in response: “Of course, I was dumb to think she could ever be loyal.”

Shayden still has photos of Lexus on his Instagram page, and he was asked why he hadn’t deleted them yet. “Cause I don’t regret anything, she’s always gonna be the love of my life and no female will ever be able to change that or be able to get me to delete any pictures.”

Despite Lexus still being the love of Shayden’s life, it doesn’t sound like we’ll be seeing them get back together yet again any time soon. “She’s not what I want for my future,” Shayden said of Lexus. “I’ve had a lot of time on my hands to sit and think about allllll of it, I need a WIFE and a FAMILY, all I have ever wanted in my life was to be a husband to a loving wife.”

So what does the couple’s split mean for their almost-three-year-old daughter Scarlett? Will there be a custody battle? “I get Scarlett just as much as she does, so there is no problem there,” Shayden said. “[I’m] not putting my child through the court system unless it’s necessary, why would I give up having her for 4 days every week when the judge will only grant me every other weekend?” he asked, before pointing out that “Indiana favors the mother no matter how bad they are.”

Given his newfound relationship status, combined with the exposure that goes along with being on a popular reality show, one follower asked Shayden if he had any women sliding in his DMs looking to seize the opportunity. Shayden began his response with a laughing emoji before adding: “A few, I ain’t that guy tho lol.”

If you’re curious why Shayden’s driver’s license was suspended, I did a little digging in the Indiana courts looking for an answer. It appears that Shayden has a history of incurring traffic infractions and then not paying the tickets. In June and August of 2018, Shayden was cited for expired tags and speeding, and in both instances a “failure to pay” notice was eventually sent to the Department of Motor Vehicles after Shayden didn’t pony up on time.

Shayden was caught driving on a suspended license in December of 2018, but it was in March of 2019 that things got a little more serious.

After being pulled over for speeding, cops not only discovered that Shayden’s license was suspended, but they also discovered drug paraphernalia. (I do not know what kind of paraphernalia yet.) The case stemming from that arrest appears to still be open.

Later in the same month, Shayden was cited for driving on a suspended license again. Then, in June of 2019, he was caught yet another time — and this time the DWSL charge was a criminal one and not just an infraction. He was given a 30-day suspended jail sentence on June 30. There is a compliance hearing in this case scheduled for March of this year.

Unfortunately, I wasn’t able to determine exactly which case resulted in Shayden having to spend his weekend(s) behind bars.

Congratulations to #Unexpected mom @LexusScheller who just announced she is pregnant with her 2nd child, her first with boyfriend Isaiah Norwood! Maybe @TLC should add her back before the show returns in March? 🤔 https://t.co/de16lMISV9

If you are a fan of Unexpected and kind of disappointed that TLC opted to stop filing Lexus and Shayden after two seasons, it appears as though a return to the show is not completely out of the question. A Twitter user asked Lexus’ mom Kelsey: “Are you guys ever coming back to #unexpected?” back in November. “Never know ??‍♀️,” Kelsey replied.

Lexus has yet to address the split (or Shayden’s cheating accusations) on Instagram.