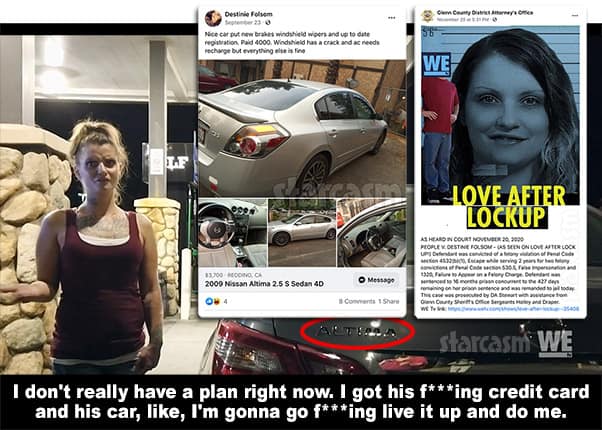 The most recent season of Love After Lockup continues to have a terrible recidivism rate for the convicted cast members. The latest cast member to head back to prison is Shawn Osborne’s runaway fiancée Destinie Folsom. Adding insult to injury, it appears as though she attempted to sell Shawn’s car on Facebook before she went back in.

UPDATE – It has been pointed out that the Nissan Altima that Destinie was selling has different taillights than the Altima she was driving on the show, so it clearly is not the same car.

There was a court hearing on Destinie’s case in Glenn County Superior Court on November 6. Two weeks later, Destinie was sentenced to 16 months in prison. Online jail records indicate that she was taken into custody that day.

Information on Destinie’s sentencing came from the Glenn County District Attorney’s Office, which seemed to be gloating about sending the Love After Lockup star back to prison with a Facebook post the same day.

Here is the photo shared by the DA, followed by the information they provided: 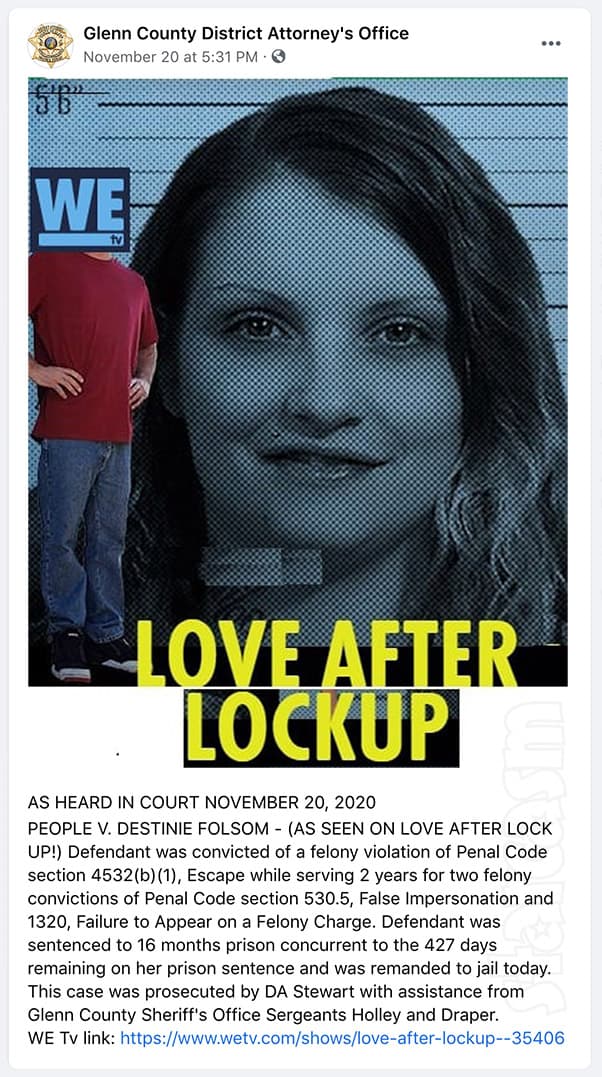 PEOPLE V. DESTINIE FOLSOM – (AS SEEN ON LOVE AFTER LOCK UP!)

Defendant was convicted of a felony violation of Penal Code section 4532(b)(1), Escape while serving 2 years for two felony convictions of Penal Code section 530.5, False Impersonation and 1320, Failure to Appear on a Felony Charge. Defendant was sentenced to 16 months prison concurrent to the 427 days remaining on her prison sentence and was remanded to jail today. This case was prosecuted by DA Stewart with assistance from Glenn County Sheriff’s Office Sergeants Holley and Draper.

Despite the joyfully informative post from the DA, it’s still a little hard to piece together the narrative for Destinie’s charge and sentencing. The escape charge was from 2017, and appears to be a situation where Destinie ran off while either on probation or awaiting a court hearing for the false impersonation and failure to appear convictions.

The original complaint for the escape charge was filed in November of 2017, and an arrest warrant was issued later the same month. It looks as though Destinie was back in custody with another police department in July of 2019 as the warrant was returned along with a transport order.

There was a motion to dismiss the charges against Destinie in February of 2020, and nine days later her $50,000 bond was filed.

The motion to dismiss was heard on September 9. It appears that the motion was denied as Destinie entered a plea of guilty the same day. I’m not sure if this was the hearing featured on the show or not.

On the premier episode of the new season of Life after Lockup, Shawn returns to his house (aka empty Airbnb) to find that Destinie has packed up most all of her belongings and split. We then see footage of Destinie driving as she talks about the possibility that’s she’s pregnant.

“I don’t really have a plan right now,” Destinie explains to the camera as she gets gas at a convenience store. “I got his f***ing credit card and his car,” she continues. Like, I’m gonna go f***ing live it up and do me.”

I’m not sure of the timing in regards to when the scene with Destinie at the gas station was filmed, but two weeks after she pleaded guilty, she created a Facebook Marketplace listing for the same make and model car as the one she was driving — which she says was Shawn’s on screen. (Shawn’s VERY serious financial issues makes me wonder if the car was actually his. Is there a such think as Carbnb?)

Here is Destinie’s listing for the car, which was posted in the Redding, California online yard sale group: 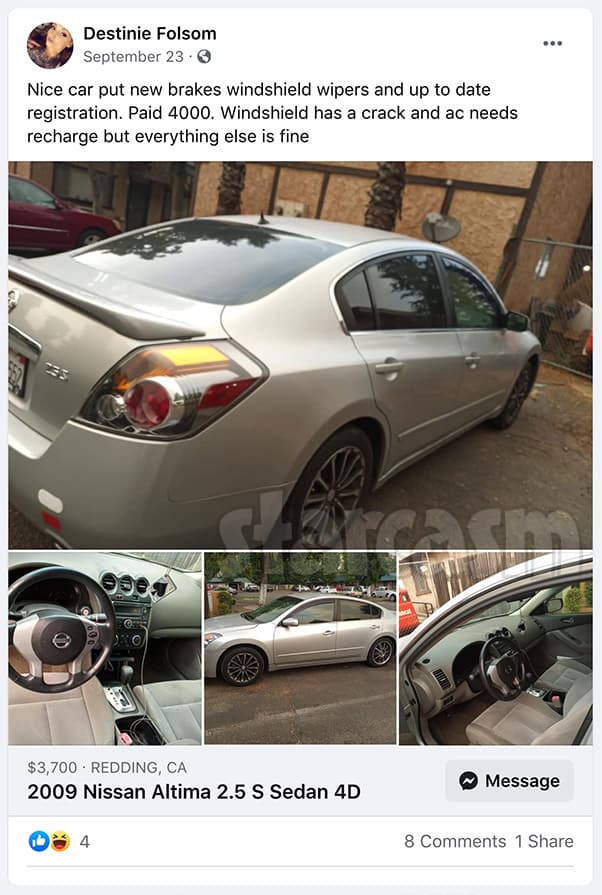 UPDATE – It has been pointed out that the Nissan Altima that Destinie was selling has different taillights than the Altima she was driving on the show, so it clearly is not the same car.

Destinie mentions in the description that the registration is up to date. Perhaps the car really was in her name? Otherwise I cannot imagine how she hoped to get any money for it?

Then again, it’s possible that her listing the car was something producers had her do for the show. Shawn not knowing where Destinie is, and then having someone send him a link to her selling his car on Facebook would be mighty entertaining!

To find out if Destinie’s attempted sale makes it on screen or not, be sure to tune in to new episodes of Love After Lockup: Life After Lockup airing Friday nights at 9/8c on WE tv!

Michael Simmons from #LoveAfterLockup was arrested for child endangerment in Florida last week — exclusive details on his arrest: https://t.co/qxyhsej3uN