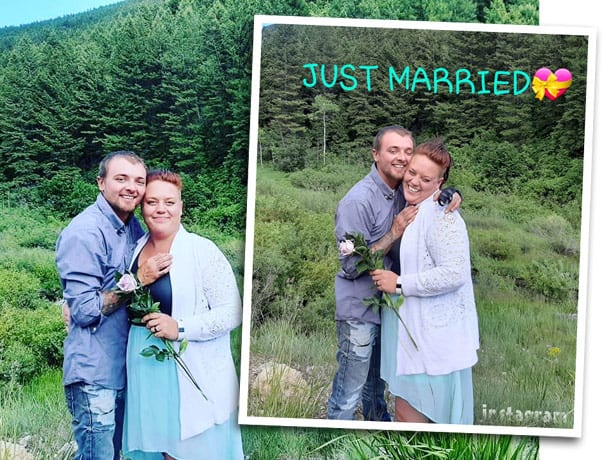 Love After Lockup star Daniel Valentine surprised his social media followers this week as he revealed that he got married to his girlfriend Zanna on Wednesday!

Daniel broke the news by posting a photo with Zanna on Friday and writing “My wife 😍 ♥” In the picture (above left), Daniel and Zanna can be seen smiling together in front of a beautiful natural backdrop, Zanna holding a single rose.

Zanna shared a photo from the same shoot (above right) and added the text: “Just married.”

The couple’s wedding day was extra special for Zanna, as July 1 is also her birthday! The 27-year-old was divorced in 2017 and is a mom to at least one young child. (I think she has two boys.) So, yep, Daniel is a dad!

If you’re curious about the couple’s timeline, they look to have been dating since at least early January — judging from photos posted on social media. Our readers may recall that Daniel was involved with another young lady last fall, but that relationship apparently did not end well.

Given that the couple got married within months of meeting, there has been some speculation among fans that the wedding was a spur-of-the-moment event. However, that does not appear to be the case — and we know that thanks to Daniel’s on-screen ex, Lizzy Copeland.

Lizzy was looking back on her relationship with Daniel on Twitter a little more than a year after the fact. “I’ve felt so emotional lately and I think it’s because this time last year I was so happy,” she tweeted on April 4. “Planning a future for myself and someone I loved dearly. Now I’m alone and living day to day. Constantly reminded of my failed relationship. And I can’t seem to connect with anyone else.”

One of Lizzy’s followers responded by suggesting she should try to make things work with Daniel, adding that “he’s a good guy.”

Speaking of Lizzy looking back on her relationship with Daniel, she did a little more of that in early March and revealed that Daniel has actually dated three women since they broke up:

A year ago Daniel took me to this really nice, Paris themed hotel room, got down on one knee and asked me to marry him.
A year later, we are no longer together.
Crazy how much can change in one simple year. pic.twitter.com/lJ937Tk6TH

That's the way I see it. Considering he's dated 3 different females since we broke up.

The day after Daniel and Zanna tied the knot, Lizzy took to Twitter to reflect on their union. “How is it that my ex GOT married and I keep getting left on read?” she asked. “Like what the f**k is life anymore..”

Despite all the looking back at her relationship with Daniel, Lizzy is moving forward. Here are some of her recent optimistic tweets about the direction her life has taken since Daniel and being on Love After Lockup:

APRIL 28 – Just in case y’all forgot about me. I’m so happy with my life the way that it is. I’m falling back in love with myself and growing in more ways than I knew possible. School is going great and work is always kicking my ass. Besides that, I am so grateful for the life I live. ❤

APRIL 30 – I constantly think about where I was a few years ago. A druggie, a drug dealer, and on the verge of losing my future. I’m forever grateful for my apartment getting raided because it opened my eyes; helped me realize that who I was wasn’t who I wanted to be. My past disgusts me.

MAY 21 – Been single for a whole year, today. I used to think I needed someone to complete me. But I have become a better person over the year. I have learned who I am and what I need. I don’t need anyone but myself. This last year has been struggle after struggle, I GOT THROUGH IT. ❤

Congratulations to both Daniel and Lizzy! I don’t think their relationship is something either of them look back on fondly, but they both seem to have moved on without falling back into their old ways. I wish them both the best and I hope that our posts about them will continue to be positive updates! 🙂

#LoveAfterLockup Lizzy & Daniel continue to fight on social media after Lizzy says Daniel uses meth & he's mentally "f**ked up." Plus, a recap of the couple's #LifeGoesOn episode in which Lizzy talks about her miscarriage that she kept secret from Daniel. https://t.co/OU932rXrK6