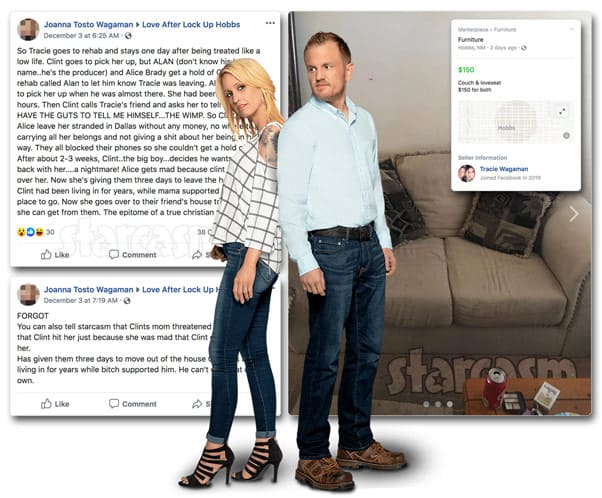 The drama continues for Love After Lockup and Life After Lockup stars Clint Brady and Tracie Wagaman as they have reportedly been kicked out of their house by Clint’s mom!

This story requires a quick refresher. Tracie recently entered a rehab facility in Texas, but decided to leave early. Clint agreed to drive from their home in Hobbs, New Mexico to come pick her up, but when Tracie left the facility, Clint was nowhere to be seen.

As a result, there were some very harsh words exchanged on Facebook, including Clint’s mom Alice.

On Tuesday, Tracie’s mom Joanna entered the conversation with a post shared on the Love After Lockup Hobbs Facebook page:

So Tracie goes to rehab and stays one day after being treated like a low life. Clint goes to pick her up, but ALAN (don’t know his last name..he’s the producer) and Alice Brady get a hold of Clint as the rehab called Alan to let him know Tracie was leaving. Alan told Clint not to pick her up when he was almost there. She had been waiting for hours. Then Clint calls Tracie’s friend and asks her to tell me. DIDN’T HAVE THE GUTS TO TELL ME HIMSELF…THE WIMP.

So Clint, Alan and Alice leave her stranded in Dallas without any money, no where to go, carrying all her belongs and not giving a sh*t about her being in harms way. They all blocked their phones so she couldn’t get a hold of her. After about 2-3 weeks, Clint..the big boy…decides he wants to get back with her….a nightmare!

Alice gets mad because Clint chose Tracie over her. Now she’s giving them three days to leave the house that Clint had been living in for years, while mama supported him. Again, no place to go. Now she goes over to their friend’s house to see what info she can get from them. The epitome of a true Christian woman.

Joanna then provided another update that she wanted us to know about specifically:

You can also tell Starcasm that Clint’s mom threatened to tell the cops that Clint hit her just because she was mad that Clint chose me over her.

Has given them three days to move out of the house Clint has been living in for years while b*tch supported him. He can’t do squat on his own.

Joanna’s claim about Clint and his Goddess being booted from their home appears to be backed up by Tracie, who has been posting numerous things for sale on Facebook — including furniture. “Why you selling?” someone asked on the listings. “We’re moving,” Tracie replied.

Tracie didn’t reveal where she and Clint plan to move — whether it will be another place in Hobbs, or perhaps back to Tracie’s home state of Texas.

Prior to Joanna’s post about the couple’s eviction and their furniture sale, Tracie swapped out her Facebook profile photo from one that included the words “Brady Strong” to one of her and a female friend. “Much better,” Joanna commented. “Glad to see Brady Strong gone. He’s anything but strong. Let go of mama’s breasts Clint. Time to get weaned baby boy.”

It’s unclear if Joanna will be featured on Love After Lockup: Life After Lockup when it returns to WEtv for a second season on January 7.