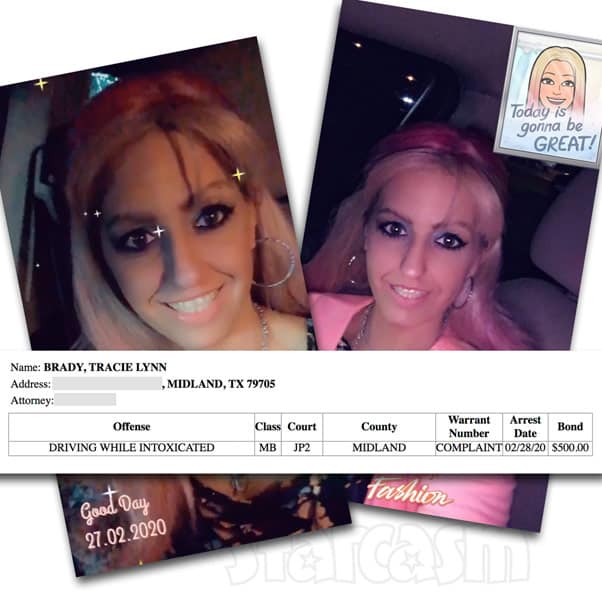 According to jail records, Tracie is currently being held at the Midland County Jail in Midland, Texas after being booked for driving while intoxicated. The jail’s website states that she was arrested earlier today and is being held on $500 bond. There are no further details available about her arrest at this time.

On a positive note, I do not see any additional charges like reckless damage or destruction, drug possession, or possession of drug paraphernalia.

UPDATE – Tracie is no longer listed as being in custody as of 1AM EST on February 29. She has also returned to Twitter to let one lucky follower know that she has followed him back.

Tracie’s return to incarceration comes less than 24 hours after she posted a series of optimistic selfies on her Instagram account. Two of her stories posted yesterday included the captions “Today is gonna be great” and “Good Day 27.02.2020.”

The booking wraps up yet another eventful month for Clint Brady’s Goddess. I tend to go overboard with drama recaps, so I will try to keep this one extremely short.

Clint and Tracie had some sort of blow up and split again. A woman from Ohio slid her Little Debbie trailer into Clint’s DMs and he drove to Ohio to be with her.

While Clint was in Ohio with his Brady lady, Tracie was at a casino dumping her WE tv quarters into a slot machine. Unlike her Life After Lockup co-star Marcelino, Tracie’s gambling paid off as she won two jackpots totaling $15,700.

After Tracie flashed her cash online and boasted about her winnings, Clint seemed to hint that he wanted to get back together with his Goddess. Tracie didn’t seem interested.

Clint then hacked into Tracie’s Cameo account and began responding to Cameo requests with enraged, profanity-laden videos bashing Tracie. He also admitted to using meth, but continues to insist that he quit weeks ago.

Thursday night Tracie shared a tweet in which she tagged Clint and added: “Text me Clint…. Ohio is nearing.” That seemed to suggest that Tracie was headed to Ohio.

On Friday, Tracie was arrested in her hometown of Midland, Texas and charged with DWI.

Clint has remained silent on social media since Tracie’s latest arrest. His most recent tweet was on Sunday. “When my time on earth has come, I want it to where nobody here questions my integrity,” Clint wrote, adding the #JustSaying hash tag.

Curious what #LoveAfterLockup #LifeAfterLockup's @TracieWagaman & @BroncoRangerGuy have been up to? They broke up, he cheated with a married female fan, Tracie won big $$ at a casino, Clint's sleeping in his car… Get a FULL recap of all the recent drama! https://t.co/y8QF5IGkFl pic.twitter.com/SsCcEaB4Dd

To keep up with the on-screen drama between Clint and his Goddess (and his mother), be sure to tune in for new episodes of Love after Lockup: Life After Lockup airing Friday nights at 9/8c on WE tv.