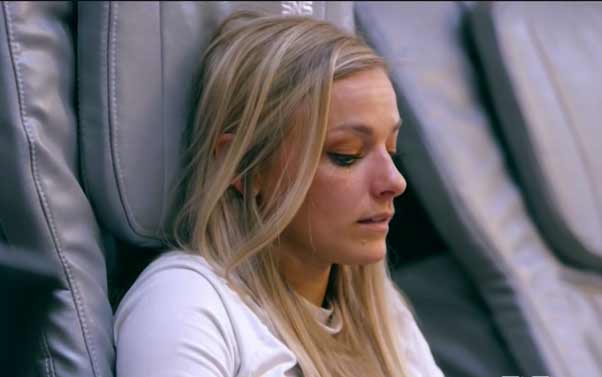 “Angela Ruth Douthit, she went to be with the Lord on Monday, December 9, 2019. She was only 50,” Mackenzie’s Aunt said at Angie’s memorial service.

“Angie did not lose her battle to cancer, she won the race set before her,” she continued. “We watched her cross that finish line, and no doubt the last part of the race was tough but she never quit and she finished strong.”

The funeral segment is very brief, and the Teen Mom episode picks up a month later, showing how Mackenzie is coping with her grief after the tragic passing of her mother. “Losing my mom is one of the hardest things I’ve ever been through in my life,” Mackenzie said in voiceover. “I took some time off to grieve but I know I need to try to get back to my normal life.”

As she gets her nails down with her friend Cayle, Mackenzie relates how she’s feeling. “The hardest part is the calm after the storm,” she says. “Now, it’s like, ‘This is reality.’ It’s like we’ll be fine and then something small will remind us.”

“Everyone says it gets easier, but it seems to be getting harder every single day,” she continues. Even going to get her toenails done triggers grief for Mackenzie because the last person she got her nails done with was her mom.

Cayla asks if Josh is helping or making it worse. Mackenzie responds that although he’s been helping, he just said something that upset her. She called him crying and he replied that he can’t help her if he doesn’t know what she’s crying about, which indicated he may have be tone-deaf in that moment about what she’s going through. Later in the episode, it shows just how unfeeling he was behaving towards her.

“I don’t know why I’m crying,” Mackenzie says about her grief. “I’m in so much pain I’m just crying. And it hurts so bad. Some days I just don’t know what to do with the amount of pain. Sometimes I feel paralyzed and I can’t get out of bed and move. I am not okay.”

Later in the episode shows an interaction between Josh and Mackenzie where Josh acts amazingly cold. She’s curled up on the couch and Josh in on another couch. “I have little hope for me getting better, even though I’m trying . . . It is very hard for me to be alive right now,” Mackenzie says.

“You feel like you’re depressed,” Josh says, flatly. “You can trying talkin’ to someone.”

“You’re saying you’re gonna kill herself, yeah, I’m not gonna be a part of that,” he says as he gets up and walks away.

“This is the support I have from him. I’m not gonna do anything to myself to because I love my kids so much, but I hate being alive,” Mackenzie explains to the producer Kristen as Josh gets in his truck.

A tearful Mackenzie reveals that she feels like she doesn’t “want to be alive anymore.” Instead of comforting Mackenzie, Josh said

Tonight on Twitter Mackenzie expressed her displeasure with her edits and presentations, especially the fact that they aired a fight between herself and Josh on tonight’s episode, which also featured her mother’s funeral.

“They filmed so much good stuff. With my mom, with Josh and I. And all that’s shown is the worst of the worst. That is not who we are,” she said on Twitter.

“And I keep my house so clean especially when filming and they decided to make it a huge point tonight to show how messy the boys room was 1 month after my mom passed like cleaning was something that’s on my mind. Ehh my heart hurts that this is even going to air,” she tweeted 8 hours ago.

“Josh dropped everything he had and was doing and moved in with my dad for over a month to help out and support us,” she continued. “Was there as best as he could be. None of that will be shown in honor of her. But a fight will be shown. The very episode of her funeral.’im sick to my stomach.”

Mackenzie’s tweets definitely show a different perspective to the narrative of tonight’s episode.