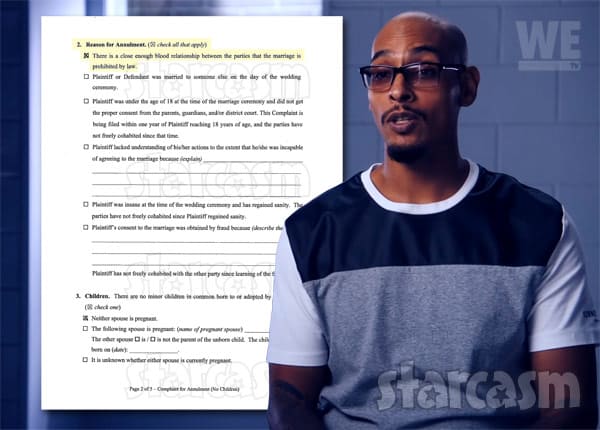 We broke the news back in January that Love After Lockup star Marcelino Santiago was married while filming the current season of Love After Lockup, even during his eventual wedding ceremony with Brittany that took place in August. At the time of our initial post, all we knew was that Marcelino filed for an annulment in June and the annulment was granted in late October. (Brittany and Marcelino then made their marriage official on December 27.)

In our previous post we listed most of the reasons that a marriage can be annulled (i.e. voided) in Nevada, which includes a participant who was a minor without parental consent, a participant with a “want of understanding” (insanity, mental disability, etc.), fraudulent consent, undue influence, or duress.

I didn’t even think to list the two reasons that a marriage in Nevada would automatically be void, which include the spouses being related by blood or either of the spouses being married to another person during the marriage. According to Marcelino’s annulment filing, the reason was one of those two!

The box he checked as the reason for the annulment was:

There is a close enough blood relationship between the parties that the marriage is prohibited by law.

The woman he was married to didn’t share a last name or anything, and I could find no connection through limited records available online. As a result, I do not know in what manner Marcelino and her were related. But, they were apparently closely related enough that it was illegal for them to wed!

Another interesting bit of information is the marriage that was annulled was in September of 1999. That means Marcelino was married 19 YEARS before the annulment went through! And, just in case I needed to say it, that means that there is a woman out there who was married to Marcelino for that long.

I don’t even want to speculate about what the story is here. I did more research online, but essentially hit a road block trying to find out anything more than the basic info from the annulment filing.

UPDATE – Additional court documents shed a little light on Marcelino’s explanation for his illegal marriage. “[Marcelino] stated in 1997, he was in the Marine Corps., he was shipped off, they got married the day he shipped out, and he found out she was a cousin and not just s friend. Further, they never consummated the marriage.” OK, that raises even more questions than I had before!

Marcelino and Brittany have been an ironclad lock box when it comes to revealing personal information on social media, so I doubt we will get an explanation from them anytime soon. Of course, if you’re really curious, you can head out to Las Vegas and attend the couple’s viewing party on Friday, March 8 and ask him yourself!

That’s right, Marcelino and Brittany are hosting a shin dig in honor of the special two-hour episode next week. There’s no cover charge or anything like that — this is just the two of them trying to pay back a little of the positivity they have received from fans this season.

Here are the deets from Brittany herself, along with a gallery of photos of the venue as well as a list of potential guest appearances:

Hosting the watch party at #thewallgaminglounge inside The Rio casino here in Las Vegas on March 8th from 5pm to 9pm. Show starts at 6pm to 8pm… (2hr special!) No cover charge. Come down and have some fun with your favorite couple from #loveafterlockup @blazebird45 & @brittany.loveafterlockup To all you Sascha fans… Yes she'll be there! Also attending @amanda.loveafterlockup Drinks, Food, Gaming, Big Screens, and yes an After Party for the real turn up! If you're serious about coming please confirm in the comments! @wetv #teambrittanyandmarcelino

A post shared by Brittany Love After Lockup (@brittany.loveafterlockup) on Feb 23, 2019 at 6:42pm PST

And the official flyer: 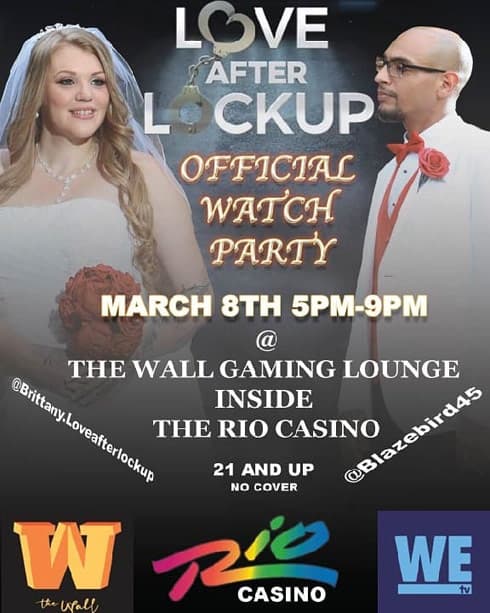 I mentioned asking Marcelino about his annulment, but I was just joking. This party is a very kind gesture on their part, and if you are actually lucky enough to attend, y’all damn sure better be nice and respectful! (And you damn sure better take pictures!) 😉

Meanwhile, be sure to tune in this Friday night for another drama-packed new episode of Love After Lockup, airing at 9/8c on WE tv!