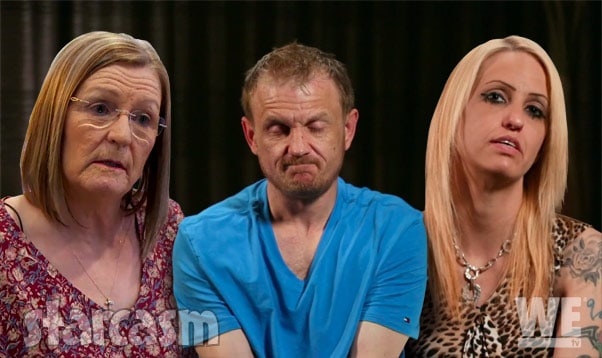 The recent updates come courtesy of Tracie herself via Twitter. Here’s her interaction with a follower in which she claims that Clint drove her to get drugs, while also revealing the state of their marriage:

TWEET: I really feel for @BroncoRangerGuy [Clint], he’s a good guy that truly loves his woman. He’s accepted her through good and bad times she does not realize how lucky she is to have someone that loves her so unconditionally.

TRACIE: Well I don’t know about unconditionally….. but he’s no angel. He just wants everyone to think so.

2) He was also using

My wife are big fans and rooting for your marriage.

TRACIE: Well our marriage is doomed. And U are correct…. He did know i was using .. Who do u think took me to score?

Here’s another interaction in which Tracie assures us that she was not with Clint for his money:

“When will he Ever wake up??” another Twitter user opined. “She’s toxic and he’s going to end up in prison.”

Tracie responded by revealing Clint was recently charged with drug possession and DUI in Ohio!

“Prison huh? Well FYI… seems Mr. Clint Brady is doing GREAT W out me. He’s already got 2 charges against him. And he caught these charges W OUT ME!” Her tweet was accompanied by a screen cap of the court’s website listing Clint’s charges.

I checked court records and sure enough, Clint has been charged with marijuana possession and DUI in Ohio. The marijuana possession charge is listed as being filed on February 2, but the offense date is listed as being the same as the DUI on February 29. I’ve reached out to law enforcement for clarification, and I will be sure to update when I find out more.

According to court records, Clint was driving his car in East Cincinnati when he allegedly committed a lane violation. The officer indicated “yes” under the “Accident” portion of the citation.

4511.19A1A Driving under the influence of alcohol/drugs

I could find no record of Clint actually being booked in a jail, and no new mug shot photo as a result. He is scheduled for arraignment on March 6.

Clint has a history of legal issues, but since he infamously crashed a Little Debbie snack cake trailer into a storage facility back in May of 2017, most all of his charges have been marijuana-related. Clint has a medical marijuana card, but it’s only good in the state of New Mexico. Clint simply cannot seem to be without pot (his true Goddess?) for any length of time at all, and has been arrested at least twice in Texas and charged once in Ohio as a result.

Clearly, marijuana use is not nearly as concerning as Tracie’s issues with crack and meth — which is something that she is the first to admit.

“Sure we can pretend pot and crack are the same… Why not?” a Twitter user wrote in response to Tracie outing Clint’s recent charges.

“WTF are u talking about?” Tracie replied. “I’m not comparing charges… I was just showing ppl since Clint likes to broadcast my stuff.”

It’s unclear how Clint’s apparent extended stay in Ohio is impacting the co-parenting of his teenage son. “Does Clint ever, like, parent his kid?” a Twitter user asked Tracie on Sunday. “He’s actually a great father!” she responded.

I did a quick search in New Mexico and was unable to find a divorce filing. My guess is that Tracie will let her Twitter followers know if and when that happens. Stay tuned.