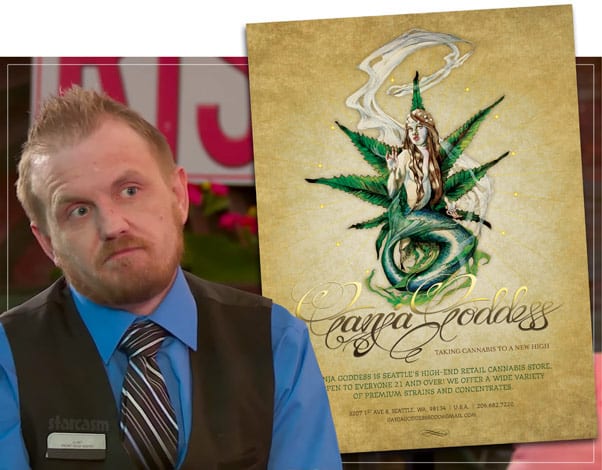 Love After Lockup: Life After Lockup star Clint Brady and his Goddess Tracie Wagaman broke up weeks ago, and the fallout from their split has played out in a vicious feud on social media. Clint, who is currently in Ohio where he was rumored to be shacking up with fan named Genevieve, recently did an interview to clarify exactly what was going on in his life. The wide range of topics covered includes Clint’s relationship with Genevieve, his recent bipolar diagnosis, his sobriety, and whether or not he plans to divorce his former Goddess Tracie Wagaman.

UPDATE – I initially credited the Clint and Genevieve interview to Soap Dirt, but it was actually a YouTube interview with Katie Joy (aka Without A Crystal Ball). I have since updated the text below to reflect that fact, and I have added the video at the bottom of the post.

“Gen and I are just friends,” Clint says of his gal pal Genevieve. “She understands me and I understand her. Whenever I have a bad day or a rough day I go to her. She seems to know me the best. We’re just friends.”

The Platonic relationship contrasts posts made by Tracie implying that Clint and Genevieve were more than just friends. Katie asks Clint if there is “anything romantic at all” about their relationship, and he fortifies his position from the moral high ground: “No, because I’m still married,” he replies. “And, I’m not trying to get myself into any more trouble than I already am.”

Genevieve was with Clint during the video, and she backs up his summation of their relationship. “People are getting it misconstrued, there was never any affair. At all,” she insists. She then goes on to reveal that she and the Love After Lockup star have managed to build an amazing bond. “I love him as my best friend in the whole world,” she insists. “I don’t know what will happen down the road, Clint doesn’t know either. But we will be in each other’s lives forever because he saved my life and I saved his.”

Genevieve reveals that they bonded in part due to addiction — but not hers. She says that her mother is an addict. Genevieve also insists that she wasn’t fame hungry for Clint’s celebrity status. “I’m not doing this for clout”, she says, before adding that she is “not a fan of Love After Lockup.”

In addition to dealing with addiction in their lives, Clint and Genevieve also have something else in common: they have both been diagnosed as bipolar. She was diagnosed ten years ago, but Clint was only recently diagnosed. He is currently in therapy and taking medication, which Genevieve says explains his erratic behavior and fast talking on screen. “He’s bipolar and he just started medication, so until that levels in his system, he’s going to talk fast,” she explains.

[She doesn’t clarify when Clint began taking his medication and how that lines up with Clint’s filming for Love After Lockup and Life after Lockup. I assume she is referring to the current season only.]

#EXCLUSIVE Find out about #LoveAfterLockup star Clint Brady's CRAZY arrest involving drug paraphernalia, a storage unit, and a @LittleDebbie trailer! Oh, and did I mention he's not even the convict in the relationship? S2 premiere tonight at 9/8c on @WEtv! https://t.co/lhdf4TnTAk

Clint also continues to insist that he no longer does “hardcore” drugs, despite what his ex Tracie has stated online. “She tries to accuse me of doing hardcore drugs and nothing could be further from the truth. I don’t do any hardcore drugs, I hate hardcore drugs. They ruin lives. I’m away from all that. I love my Mary Jane. That’s all I want in life, ya know?”

Clint’s fondness for marijuana is such that he says pot is his real soulmate. Unfortunately for Clint, his real soulmate has gotten him into quite a bit of legal trouble. He has a medical marijuana card valid in New Mexico, but Clint rarely travels anywhere without his soul mate and has been arrested multiple times in Texas for marijuana possession. He was also charged with marijuana possession in Ohio on two separate occasions last month. The second charge also included DUI after Clint reportedly crashed his car into a utility poll while texting.

#LoveAfterLockup Clint charged with pot possession twice in Ohio, the 2nd time after crashing his car into a utility pole. Get those details, plus an update on the social media feud between @BroncoRangerGuy & @TracieWagaman that's gotten REALLY nasty. https://t.co/WesQ22LtWZ

The car crash has apparently left Clint a bit high (heh heh) and dry as far as transportation goes. One of his Facebook followers suggested that Clint visit her in Youngstown, Ohio. “Clint Brady, if you ever make it up to the Youngstown area let me know we’ll Blaze up,” she wrote.

“Youngstown…. ? when I get a ? I sure will,” Clint replied. “For some reason I’m unable to rent a car under my name ? ?,” he added, clearly referencing the infamous night after his Houston wedding ceremony with Tracie when she stole his rental car. (Click here for the full story on whatever happened to the rental car.)

Another Facebook follower asked Clint if he ever got the bail money back that he spent to get Tracie out of jail this season. “Yes,” he says, “got and spent that LONG ago lol. I have damage to my truck, car, credit, & now life ?.” Clint doesn’t mention anything on social media or in his interview with Soap Dirt about having or getting a job.

So what about Clint and Tracie’s marriage? “Clint Brady said he does plan to divorce Tracie Wagaman as soon as possible,” Soap Dirt reveals.

Meanwhile, Clint has persistently been trying to get In Touch Weekly‘s attention on Twitter, hoping that the tabloid will help share his side of the story. He tagged them in a tweet on Tuesday and wrote: “Boy do I (NEED TO) have a story to tell u!!! All I know how to do is tell the TRUTH…the whole truth, & nothing BUT the truth! (Idk how to manipulate or lie!)”

On Wednesday, Clint responded to an In Touch tweet about one of their recent articles (in which 90 Day Fiance star Paola Mayfield “sets the record straight”) with just an emoji of a man raising hi hand.

Clint continued to court In Touch with additional tweets, to no apparent avail. However, the site did share an exclusive Love After Lockup: Life After Lockup preview clip featuring Clint and Tracie earlier today. “Is Clint finally ready to give up on Tracie on #LifeAfterLockup?” the site teased the clip — included below.

The tweet drew multiple responses from Clint, in which he reveals some more details about recent events and his current situation:

I gave up on her LONG AGO HELLO

No thanks to Tracie, I am now FINALLY in my own apartment in Cincinnati… barely surviving by the skin of my teeth

There ARE 2 SIDES TO EVERY STORY @intouchweekly

Clint then tagged In Touch as he promoted a Facebook Live he plans to do later tonight:

Hello @intouchweekly … join me tonight at 9/8CST on my @Facebook live page ??

AGAIN, that’s only for ONE HOUR @ 9/8CST then I won’t be on @Facebook live anymore because I have a life to live and lead ?

Unfortunately, Clint’s Facebook Live session is at the same time as the new episode of Love After Lockup: Life After Lockup, so those wanting to keep up with his and Tracie’s story on screen and off will probably need to set their DVRs.

UPDATE – Here is the interview with Clint and Genevieve:

LOVE AFTER LOCKUP Tracie Brady arrested for DWI in Texas