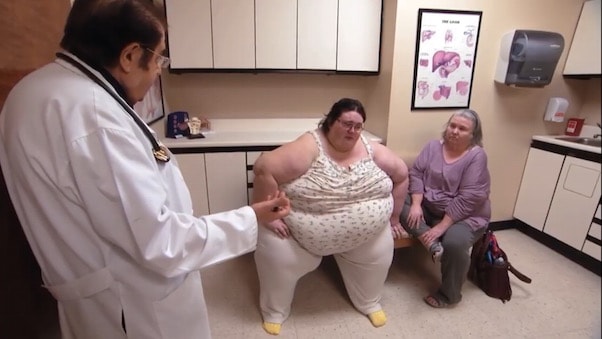 The high-profile Texas attorney handling the My 600 Lb Life lawsuits promised us “more to come” in an exclusive interview with Starcasm, and that promise has been fulfilled once more. In a surprise Jeanne Covey update, the divisive Season 7 star becomes the fifth My 600 Lb Life cast member to sue Megalomedia as well as the rest of the show’s producers. Jeanne and her mother, Barbara Fallaw, make many of the same allegations as the previous four cast members to sue — and further claim that Megalomedia reneged on a promise to pay approximately $70,000 in medical bills for the pair.

Jeanne Covey update: What does her lawsuit allege?

In short, Jeanne’s lawsuit claims that she and her mother Barbara were forced to continue filming after Jeanne’s father passed away. It also appears to suggest that producers faked a great deal of Jeanne’s episode in order to reinforce the narrative of failure they had already set up. (The latter claim is one we’ve seen in previous lawsuits.)

It’s been a little less than a year since My 600 Lb Life viewers met Jeanne, who began her episode at a peak weight of 702 pounds. Though Jeanne’s mother Barbara traveled with her to Texas to help alongside Dr. Nowaradan, both daughter and mother were devastated by the death of Jeanne’s father, Lawrence Charles Corrao, approximately six months into filming.

“I talked to my mom,” Jeanne said in a voiceover during her episode, “and we both decided we’re not going back to Houston. With my dad gone, we can’t leave the dogs alone and I can’t go by myself. So I’m just not in a place to do Dr. Now’s program. I know I have to lose weight and I don’t have a lot of time if I don’t, but I don’t know what to do about it right now.” At the time, Jeanne was the first My 600 Lb Life cast member to voluntarily end Dr. Now’s weight loss program before a year of filming was complete.

But the lawsuit at the center of this Jeanne Covey update suggests much more to the story. As we’ve already seen with other cast members, Jeanne alleges some reality TV fakery at the producers’ hands. But the difference with Jeanne’s lawsuit appears to be a matter of degree. Though Jeanne and Barbara asked “to discontinue [their] episode” after Lawrence’s death, the two were “threatened…with a lawsuit” if they “did not comply with all of their production demands.”

That threat, according to the suit, exacerbated Jeanne’s difficulty sticking with Dr. Now’s weight loss plan, which then became the sole narrative of Jeanne’s episode. From Jeanne and Barbara’s lawsuit:

Initially, Dr. Nowzaradan placed Ms. Covey on an extreme weight-loss diet. However, and to support Defendants’ narrative, they required her to eat excessive amounts of food on screen to portray her as someone who could not follow the diet. After filming began, Ms. Covey’s father passed away. This caused her emotional distress. Despite asking Defendants to discontinue her episode, Defendants insisted that filming continue. Defendants threatened Ms. Covey with a lawsuit if she did not comply with all of their production demands. These threats and demands significantly worsened Ms. Covey’s already weakened emotional state. Defendants created this narrative and then for Dr. Nowzaradan to express disappointment to her for failing to follow the diet and failing to obtain the necessary amount of weight loss to be a candidate for surgery.

The Jeanne Covey update also repeats an allegation now present in four of the five My 600 Lb Life lawsuits: that the producers failed to make good on their promise of covering all medical bills. It’s due to this alleged broken promise that Barbara Fallaw is named in the suit.

While Jeanne didn’t undergo weight loss surgery and thus incur medical debt, Barbara says that she had an agreement with producers regarding an unexpected hernia surgery. Initially, Barbara’s health insurance was going to cover the surgery. But because Barbara was already filming with Jeanne, Megalomedia “offered to pay for all of her surgical costs” if Barbara would “participate in additional filming.”

However, when Barbara was in the hospital and about to have hernia surgery, producers had her sign a film release. Afterward, Barbara got a bill for “approximately $70,000,” which Megalomedia has “refused to pay.”

We should point out that $70,000 is by far the biggest amount of medical debt yet detailed in any of the five My 600 Lb Life lawsuits. Here’s the relevant portion from Jeanne and Barbara’s suit:

During the production of Ms. Covey’s episode, Defendants also filmed Plaintiff Fallaw. Ms. Fallaw became an integral part of the story created by Defendants while filming Ms. Covey’s episode. During filming, Plaintiff Fallaw represented to Defendants that she needed a hernia surgery. Her insurance authorized the surgery. However, Defendants offered to pay for all of her surgical costs in exchange if she would agree to participate in additional filming and appearing on her daughter’s episode. Ms. Fallaw agreed and Defendants began filming her surgical story.

How many My 600 Lb Life cast members have sued Megalomedia?

As we stated above, Jeanne is the fifth member of the show’s cast to file a lawsuit against My 600 Lb Life‘s producers. Because Jeanne didn’t find weight loss success during her debut episode, it seems safe to assume that the show’s viewers will meet her lawsuit with the same cynicism they unleashed upon Season 8’s Gina Krasley when Gina became the fourth cast member to sue.

However, the presumption that the only cast members filing suit were the ones who didn’t lose any weight is inaccurate. Maja Radanovic, the Season 7 cast member who filed the third suit, lost over 100 pounds by the time filming for her episode wrapped.

And the first two My 600 Lb Life cast members to file suit were among the most successful of Season 6. Deceased cast member LB Bonner, whose family filed the first lawsuit, lost over half of his peak weight of 650 pounds and quickly became a fan favorite. And David Bolton, who appeared alongside his brother Benji, had one of the most successful single episodes in the show’s entire history: unofficially, David has dropped 452 pounds from his debut weight of 747.

You can stream Jeanne’s My 600 Lb Life debut via TLC.

VIDEO Bethenny Frankel shows how to workout in stilettos