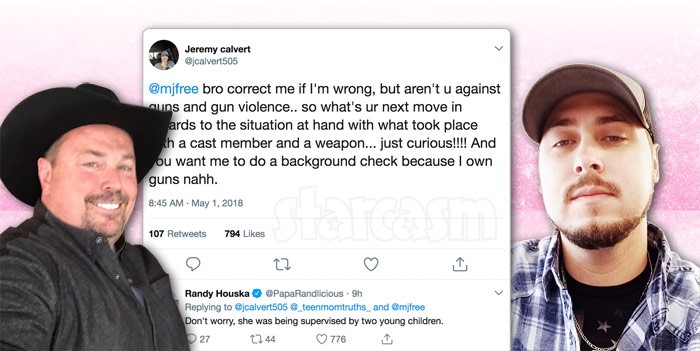 The fallout continues after Teen Mom 2 star Jenelle Eason reportedly pulled a gun on a man while following him home in a road rage fit last week. The latest to react are two of Jenelle’s male Teen Mom 2 co-stars, Jeremy Calvert and Dr. Randy Houska.

Jeremy used the incident to test the show’s executive producer, Morgan Freeman, who is very open about his liberal political leanings — including the support of more strict gun control legislation. Jeremy is the opposite, and has been very vocal about his pro-2nd Amendment stance.

“@mjfree bro correct me if I’m wrong, but aren’t u against guns and gun violence?” Jeremy began his tweet. “So what’s ur next move in regards to the situation at hand with what took place with a cast member and a weapon… just curious!!!!” Jeremy then adds: “And you want me to do a background check because I own guns nahh.”


Jeremy’s tweet caught the attention of Chelsea Houska’s dad, Dr. Randy Houska, who has had previous issues with David and Jenelle. “Don’t worry, she was being supervised by two young children,” Randy joked, referencing the police report from the incident, which mentioned that there were two children with Jenelle in her Durango when her alleged road rage unholstering took place.

Randy’s comment got a “Lmfao” from Jeremy and this response from another tweeter following the conversation: “Don’t worry he won’t read this. He only tweets about Trump ?”

I’m thinking that comment was about Morgan Freeman; judging by his response, though, Randy may have thought it was in reference to David and Jenelle: “Plus I used a couple of big words that would confuse them.”

All joking aside, Jeremy’s tweet directed at Morgan Freeman raises a VERY serious question. As The Ashley revealed earlier today, MTV network execs are reviewing the footage from the incident and are reportedly “furious” over the whole thing. If it was as serious as it sounds, then the execs have to be concerned not only about public perception of the show and network if they allow Jenelle to stay, but presumably about the safety of the production crew, members of which may now be extremely wary around Jenelle.

The crew is already fearful of Jenelle’s husband David, something that made it easier for the network to fire him after his homophobic and transphobic rants.

And speaking of the crew fearing David Eason, Jenelle reportedly brought David along to film this weekend — just days after the road rage incident — and production had to be shut down! From Radar Online on Tuesday:

“Jenelle didn’t film all weekend when she had the kids, but she was supposed to film on Sunday with Jace,” the source snitched.

“She showed up with David in the car, which is not allowed. The security guard told everyone to stay back because they were afraid he might have had a gun.”

The source added that “producers told Jenelle that they weren’t going to film with her” before Jenelle “threw a fit and left.” 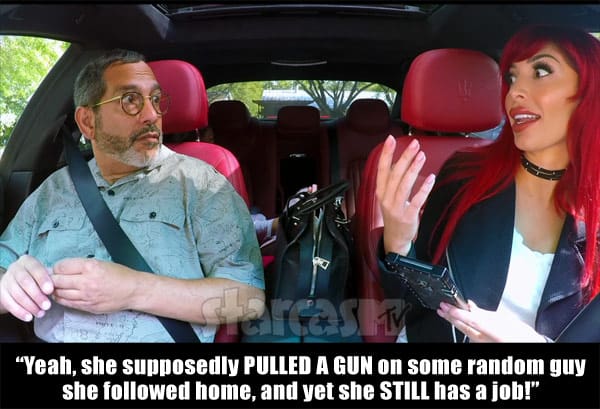 Let’s not forget that Farrah Abraham was fired from Teen Mom OG for continuing to pursue completely legal endeavors in the adult industry combined with her history of being difficult to work with. Jenelle CLEARLY has the “difficult to work with” part of the firing equation down, so it boils down to whether or not her history of legal issues (despite avoiding any felony convictions) would be perceived as being as bad as Farrah appearing nude on cam sites and films. The same thing applies to Maci’s ex Ryan Edwards, for that matter.

It’s a fascinating debate, and one that has been raging on pretty much every Teen Mom online forum for months now. How could they fire Farrah and keep people on the show who are not only breaking the law, but putting other people at risk of being hurt or killed? (That driving scene with Ryan when he was passing out from being high was way worse than Farrah put vibrating toys in her backdoor for tips, at least in my opinion.)

I think it is VERY important to point out that we still don’t really know exactly what went down with the road rage incident as far as the gun goes. We have the police report in which the other driver says that Jenelle pulled a gun on him, but that has not been confirmed. I am guessing that given the multiple reports of MTV and parent company Viacom giving the matter so much attention, that the witness’s account was accurate, but we don’t know that for sure.

If she really did pull a gun on a man (and his family, if I’m reading the police report right: “My whole family is all gathered around,” he reportedly told the 911 operator), then I don’t understand how she hasn’t been arrested yet. Even if he pulled a gun on her first, which would explain why he told the operator that Jenelle was “fixin to get shot,” then I still think the fact that Jenelle chased him onto private property would mean she broke the law as soon as she brandished a weapon? I don’t know. Maybe not. It sure seems like everyone Jenelle knows has been arrested in Brunswick County for less over the years.