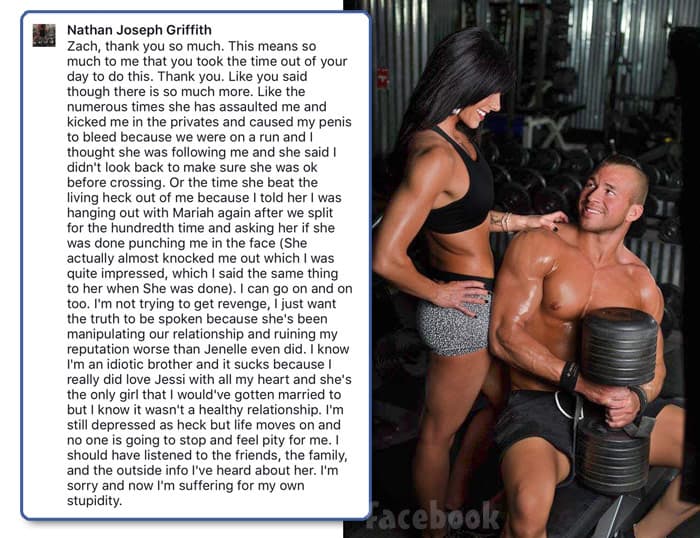 Teen Mom 2 viewers are all too familiar with the unraveling of the relationship between Jenelle Evans and Nathan Griffith, which eventually led to multiple altercations and arrests. But, it appears that Nathan’s next relationship with Jessica Henry may have been even more contentious and violent!

In case you missed it, Nathan was arrested last week and charged with domestic violence after an incident at Jessica’s home during which she claims that he pinned her on her bed and choked her. Once out of jail, Nathan shared a very lengthy account of his side of the story, which involved a lot of innocent attempts to talk things through on his part — and no violence.

After Nathan’s account went public, Jessica’s roommate Alex took to Facebook to challenge his story and point out that he has a history of threatening Jessica and being violent towards her.

Alex’s claims then drew a response from Nathan’s brother Noah (aka Zach?), who defended his brother and claimed that Jessica’s prior ex had a restraining order placed on her which resulted in her being arrested at one point.

Nathan’s response to Noah’s post was extremely appreciative of his brother’s support, and he shared details of previous incidents with Jessica in which she was violent towards him, including the “numerous times she has assaulted me and kicked me in the privates and caused my penis to bleed because we were on a run and I thought she was following me and she said I didn’t look back to make sure she was ok before crossing.” 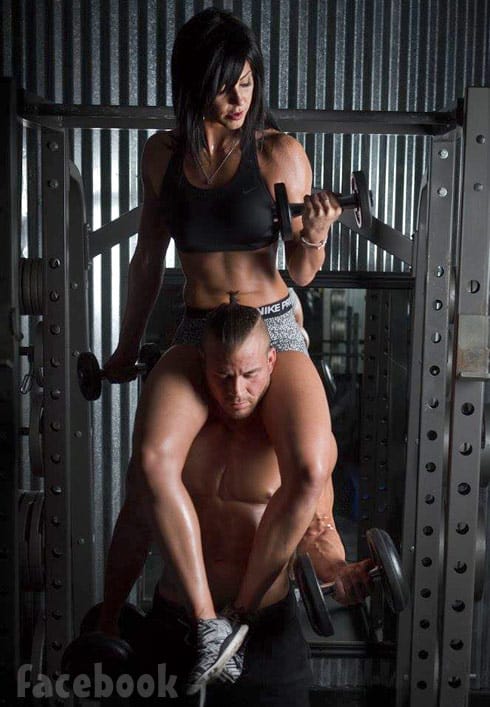 Nathan describes another altercation with Jessica that sounds eerily similar to his unsuccessful bid to become an MMA fighter. He recalls “the time she beat the living heck out of me because I told her I was hanging out with Mariah again after we split for the hundredth time and asking her if she was done punching me in the face (She actually almost knocked me out which I was quite impressed, which I said the same thing to her when She was done).”

Somehow Nathan still manages to express fondness for Jessica and he goes so far as to say at one point that “she’s the only girl that I would’ve gotten married to.”

Nate Griffith failed to mention the details of his story. He let himself into our home without consent from anyone when Jess wasn’t home. We keep the doors locked specifically because of his behavior. I guess someone forgot to lock it. He must have also forgotten the part in his story about having Jess pinned to her bed on top of her covering her mouth to keep her from yelling for my help. I asked him to leave and when he did he proceeded to bang on MY bedroom window cursing at me at 3am because I was showing Jess my cell phone as well as the side door windows holding her phone in his hands as incentive for her to go outside and speak with him. And that’s a very very short cleaner summarized version. God this is annoying.

NOAH (Nathan’s brother): That’s a damn lie ^^^ kinda funny you say 3 am when nate called me at 1107 telling me he was going home and jess was acting crazy. Then proceeded to call me back when he got home. Jess and nate don’t have the best relationship, yes they fight, I have personally witness jess screaming for “help” with nate not even in the same room. I also have seen the text messages on my mom’s phone from her begging and I mean begging him to come down that night. I have also seen my mom’s reply with ” please jess, stop asking, I know you and your roommates are setting him up. Don’t worry, that will come out in court. This girl has never had a single mark on her by the hands of nathan. She tells her parents she has never drink and she has been so drunk she couldn’t walk numerous times. I have seen this girl get so drunk and come into the bar and physically attack nathan. Don’t worry, that bartender will be there in court too. This girl had a restraining order on her by her ex husband for domestic violence oops bet you didn’t know I knew that. She went to jail for it. I am pretty sure there was a stalking charge in there too. I have personally witness her take Nathan’s keys 100 times minimum. I have seen her take her car and block nathan in and wouldn’t let him leave. So you say he was choking her in her bed but yet say he was standing outside your window with her phone? Kinda weird to be choking someone inside on their bed while standing outside now isn’t it??? Didn’t not but 1 month ago she accuse nathan of this exact to the T charge with the exact to the T at the exact same time of night with nathan once again not being there and absolutely zero marks on her?? The 2 guys she dated before nathan, one being my best friend, will also be there explaining exactly what she has done to them also. Ranging from coming to their works making a scene, stalking them at wee hours in the morning, calling there works, messages to me stating she was going to kill herself if nathan left her. This is just the half of it. Now I understand you are taking up for you friend, you personally yourself in the report said you never saw nathan touch her. Are you changing your story?

Sorry about some of the spelling and grammar errors in this. I wrote it super quick with a lot of passion. I know the difference between there, their and they’re. I was just speed typing haha.

NATHAN: Zach, thank you so much. This means so much to me that you took the time out of your day to do this. Thank you. Like you said though there is so much more. Like the numerous times she has assaulted me and kicked me in the privates and caused my penis to bleed because we were on a run and I thought she was following me and she said I didn’t look back to make sure she was ok before crossing. Or the time she beat the living heck out of me because I told her I was hanging out with Mariah again after we split for the hundredth time and asking her if she was done punching me in the face (She actually almost knocked me out which I was quite impressed, which I said the same thing to her when She was done). I can go on and on too. I’m not trying to get revenge, I just want the truth to be spoken because she’s been manipulating our relationship and ruining my reputation worse than Jenelle even did. I know I’m an idiotic brother and it sucks because I really did love Jessi with all my heart and she’s the only girl that I would’ve gotten married to but I know it wasn’t a healthy relationship. I’m still depressed as heck but life moves on and no one is going to stop and feel pity for me. I should have listened to the friends, the family, and the outside info I’ve heard about her. I’m sorry and now I’m suffering for my own stupidity.