Last night’s season finale of Teen Mom featured an extremely disturbing and dangerous scene with Ryan Edwards and his now-wife Mackenzie Standifer. Before they got in the car, Ryan appeared to have sleepy, glazed eyes, and seemed out-of-it, but they continued with the ceremony. Even though he was obviously not feeling very alert, he got in the driver’s side of the car while Mackenzie sat beside him in a her beautiful wedding gown. 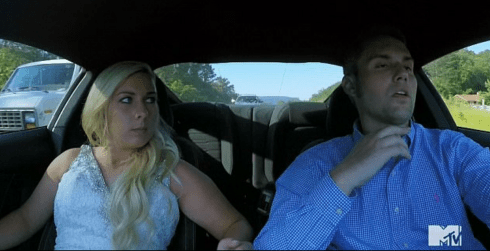 A camera mounted on their dashboard caught Ryan nodding in and out of consciousness while driving on the highway, putting himself, Mackenzie, and anyone else on the road with them that day in grave danger. “Why are you swerving?” a concerned Mackenzie asked. “My eyes baby,” Ryan replied. “In the sunlight I can’t keep them open.”

The dash cam scene went on for an excruciating amount of time as Ryan struggled to stay awake and keep his eyes open. Finally, Mackenzie turned off the camera, but the device still caught her asking Ryan if he was on Xanax. “I don’t have any. I put that on my kid’s life,” Ryan replied. Earlier in the episode Maci expressed her dire concerns over Ryan’s addiction and was seen telling their son Bentley that he wouldn’t be able to visit his dad for a while.

Ryan kept his sunglasses on for his ceremony and still seemed to have droopy eyes although he didn’t appear to nod or fall asleep while he got married. His mother was seen crying sad tears, not ones of joy, on camera over the circumstances of the small, private wedding.

Shortly after these filmed nuptials, Ryan checked into rehab. His ex Dalis Connell made the claim that it’s not his first time in rehab. It’s very common for people who struggle with addiction to relapse after receiving treatment.