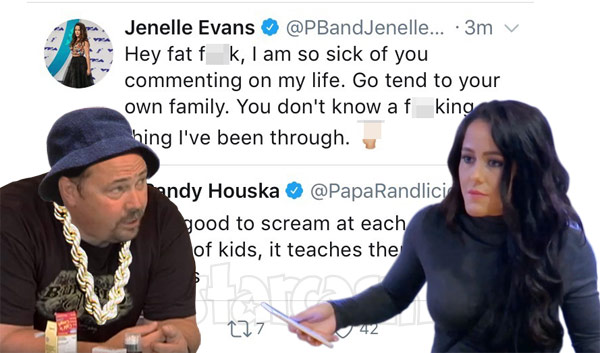 The heated exchange began (I assume) after a scene in which Jenelle and fiancé David Eason confronted her mom Barbara Evans at a restaurant where they saw her drinking from a wine glass before then driving away with Jace and his two young cousins. As you might expect, Jenelle and Babs’ discussion was at a high decibel level as Babs tried to get the three children in her vehicle to leave.

“It is good to scream at each other in front of kids, it teaches them great things,” Dr. Randy tweeted. Cue: Ron Burgundy…

“Hey fat f**k,” Jenelle responded, “I am so sick of you commenting on my life. Go tend to your own family. You don’t know a f**king thing I’ve been through.” She added a middle finger emoji to round out the response.

A Twitter user responded to Jenelle by letting her know “Love you but that is unnecessary Jenelle.”

“I don’t give two sh!ts anymore,” Jenelle wrote. “Not any other parent comments about me negatively except Randy. Nothing positive, EVER.” Jenelle then explained that the heightened decibel level was thanks to Babs. “If my mom wasn’t involved then there wouldn’t be issues, anger, or tension. The love and compassion would the vibes.” She finished that tweet with the #Truth and #TeenMom2 hashtags as well as the ? emoji.

Here are the visual receipts:

Jenelle would later delete her tweets, but one still remains that looks to be a message for Randy as well as any one else looking to offer up their constructive criticism of Jenelle’s parenting skills:

My family is none of your business. #SitDown ??

Something tells me there will be more show fans than usual keeping an eye on Dr. Randy’s Twitter account when the next episode of Teen Mom 2 airs Monday night at 9/8c on MTV!

UPDATE – Jenelle has since doubled down on her criticism of Randy in a new interview. She says he ignores Aubree and calls him a “creepy Teen Mom troll.” Click the link for all the latest!

In case you were curious, this isn’t the first time Jenelle and Randy have clashed on Twitter — you might recall the spat involving Chelsea’s website announcement that also brought Kail Lowry and Jenelle’s former manager Johnny Donovan into the fray.