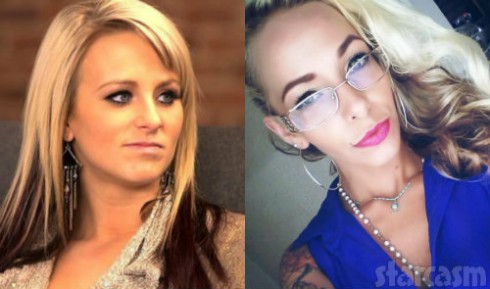 Teen Mom 2‘s Leah Calvert may be moving on from her marriage to Jeremy Calvert with new boyfriend T.R. Dues, but at least one person isn’t happy about it: Mandy Winnell, the mother of T.R.’s two sons.

“I hope Leah doesn’t start drama,” Mandy told In Touch. “I’m not known to be very nice, so we need to stay on each other’s good side!”

Despite the talk about staying “on each other’s good side[s],” Mandy didn’t exactly do that when she revealed Jeremy warned her about Leah’s parenting.

Mandy added Jeremy is already rethinking the custody agreement he struck with Leah. As we reported last week, Jeremy decided to split custody of his daughter with Leah because of his demanding job. As a source said, “There’s no way he can raise Addy on his own while he’s working out of town so frequently.”

Leah is nearing the end of treatment in rehab. During her treatment, Addy has reportedly been staying with Jeremy’s parents while older twins Ali and Aleeah split time between dad Corey Simms and Leah’s sister’s house.

The new season of Teen Mom 2 premieres on MTV on Thursday, July 9 at 10/9c. Note we’re using “Leah Calvert” until she changes her name on social media.