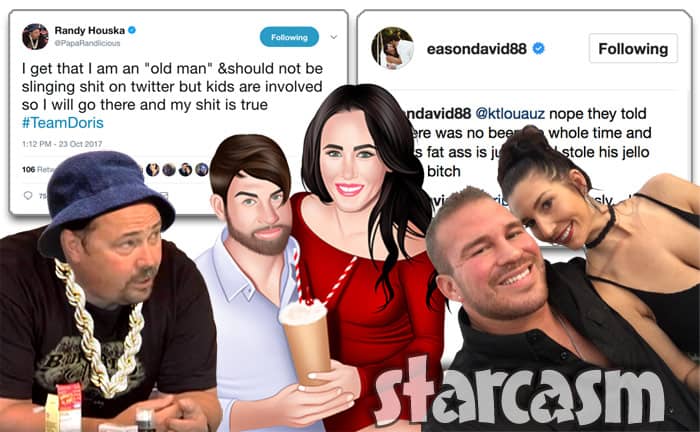 The fallout continues from all the drama surrounding the Teen Mom 2 Reunion filming in Los Angeles this weekend! In case you missed it, Jenelle Eason’s husband David Eason was reportedly cut off from the beer supply while the casts of Teen Mom 2 and Teen Mom OG were filming a New Year’s Eve clip show, and as he stormed out he got out a pocketknife and began slashing balloons. The following day, there was an altercation backstage between Jenelle, her ex Nathan Griffith, and Nathan’s girlfriend Ashley Lanhardt. Jenelle has shared her side of what happened, and now Nathan, Ashley, and Dr. Randy Houska (!?) are offering up theirs!

We will start with Nathan and Ashley, who took to Periscope to post a lengthy video explaining what happened leading up to and during the backstage altercation:

"Unsealed files of the biggest lies on planet Earth." https://t.co/En4jHRdmmm

Once again, all the basic facts seem to line up with prior reports:

• Jenelle’s mom Barbara Evans gave Ashley a hug backstage, which did not sit well with Jenelle.

• A shouting match erupts between Jenelle and Ashley, and then Nathan.

• Jenelle calls her husband David Eason, who is in the parking lot, and asks him to come in.

• Other cast members and their kids scramble to various green rooms for safety reasons.

To be honest, the only major discrepancy in the stories is how loud Jenelle made her comment about Ashley not wanting to film, and to whom she was directing her comment to. Jenelle says she was telling her friend and Ashley overheard, while Ashley says Jenelle was right behind her and said it loudly to her.

In the video above, Nathan says that he and the rest of the cast members were getting along great, and he says that the major drama ALWAYS centers around Jenelle. He also expressed his frustration over being portrayed as a violent person on the show, and pointed out that his concerns over Jenelle’s violent outburst (for himself, Ashley, and his son Kaiser) were not taken as seriously by security as if the roles had been reversed and he had been the aggressor.

Nathan also doubles down on his claims that David looked “high as a kite.” As we mentioned in our Reunion recap post, Nathan reportedly had drug test kits for David and Jenelle when he did his interview segment with Dr. Drew. (David was supposed to appear with Nathan during the interview, but he and Jenelle bailed just before filming began.)

OK, so what in the world does Randy Houska have to do with all of this? You may recall that Randy and Jenelle have had their issues in the past, so perhaps that motivated him to speak out on the he said/she said accounts of what went down? Whatever the reason, Randy did speak out:

Just watched bunch of videos(both sides)Everything I saw went exactly as @GroundLevelUp described it.We were stuck right in the middle of it

there was overlap in the stories that agree, but accuracy overall counts

Of course, it may not have been Randy’s past issues with Jenelle that motivated him to react — it could have been David Eason calling him a “fat *ss” and “lil bitch.” Wait, what?!

The anti-dentite remarks from David happened on Instagram in the comments section of a video clip he posted featuring himself playing (not playing) beer pong:

I assume someone referenced Randy Houska posting about there being alcohol available at the party in a since-deleted comment because David responed by writing “Nope they told me there was no beer the whole time and Randys fat ass is just mad I stole his jello shots lil b!tch.”

One commenter told David to not even go there, adding that “You’ll never be half the man Randy is.” David snapped back with “obviously… he looks like a oversized bean bag chair.” David would later seemingly contradict himself on the prohibition claim by adding “umm… actually I was the one making the drinks because they lied and said there wasn’t any so I just served everyone!” Here’s a photo of David tending bar:

My babe was the one and only bartender for the ladies, not to mention the Jenga master. ???

In addition to the shade from David, Randy also started catching some from the @JenelleEvansPR Twitter account, which is the account Jenelle has used often in the past whenever her account is shut down for whatever reason (as it is now).

@PapaRandlicious David actually told everyone he was praying for them. He didn’t cuss at anyone or engage in argument

Dr. Randy caught wind of the disses earlier today, but he has one of those “real job” things and had to delay his clapback a bit: 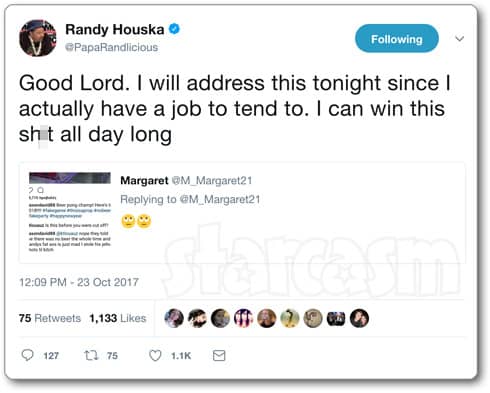 When Randy finally got a break from his dentistry, he explained what the whole “Russian roulette Jell-O shot tray” remarks were all about:

Sitting by table of Jello Shot Roulette. David grabs a couple,I told him they were saving them to film a scene.He then grabs about 8 of them pic.twitter.com/UfDrs3VqrF

Randy then explains getting his hands dirty in the drama pettiness. “I get that I am an ‘old man’ &should not be slinging sh!t on twitter but kids are involved so I will go there and my sh!t is true #TeamDoris.” (Doris is Nathan Girffith’s mother, who is trying to get emergency custody of Kaiser.)

After all of this, there was apparently some sort of controversy over the identity of the source for The Ashley’s Reality Roundup, the site that broke the Reunion stories this weekend. The Jenelle PR account tweeted a text message conversation about the “leak,” which included a list of names that I guess was a list of who might potentially be the leak? 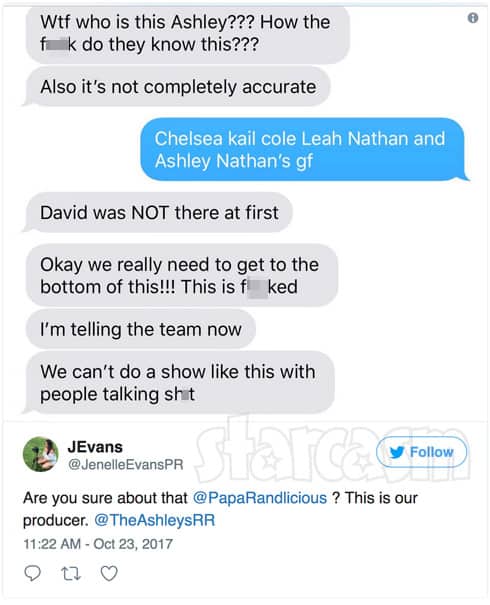 The fact that Cole DeBoer’s name was mentioned drew a laughing response from Chelsea:

Even the thought of cole talking about drama with a tabloid makes me giggle lol I could see why they would think every1 else..but cole?! Lol

Randy then pointed out that Cole wasn’t even at the party because he left to take Aubree and Watson back to the hotel. Randy says that David asked Chelsea where Cole was, and she explained that he took the children to the hotel. According to Randy, David then “told Chelsea that’s what grandparents are for.”

OK, I think that should get you all caught up!