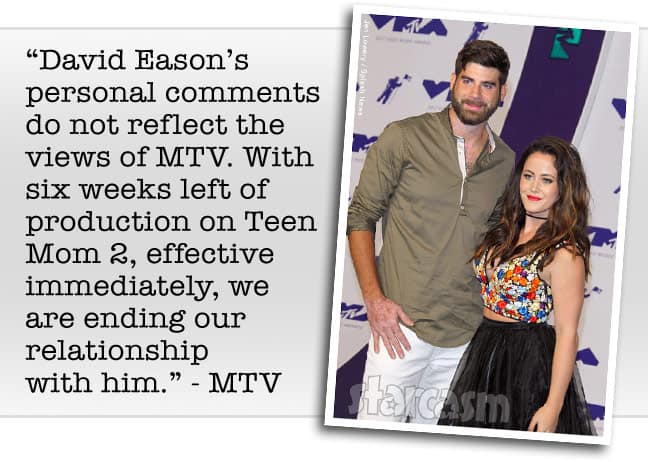 Only one day after Teen Mom 2 star Jenelle Eason’s husband David Eason went on a Twitter tirade comparing homosexuals and transgender people to dogs with fleas, MTV has officially parted ways with him by announcing he is fired from Teen Mom 2 immediately.

David Eason’s personal comments do not reflect the views of MTV. With six weeks left of production on Teen Mom 2, effective immediately, we are ending our relationship with him.

That still leaves the door open for David to appear next season in scenes he has already filmed — right up until he makes those statements on Twitter.

Also up in the air is how — or if — MTV plans to feature Jenelle for the remainder of the shooting for next season. It will be a very difficult challenge to continue to tell her story without David, and it’s not as tough they can just blur him out. Also, will Jenelle even be willing to continue shooting after David was fired? Show producers are reportedly meeting in New York tomorrow, so I am sure they will be trying to figure all of this out.