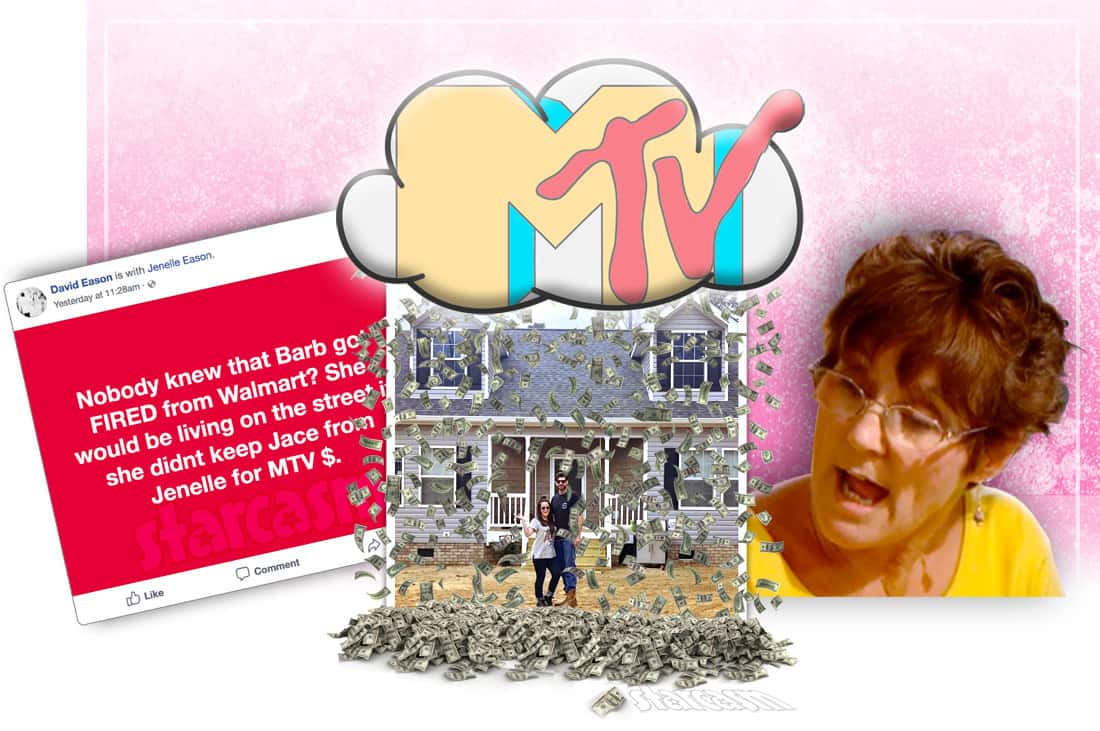 Jenelle Eason’s husband David Eason continues to prove that it is very easy to type even when you have your foot permanently embedded in your mouth. The controversial reality star dad took to Facebook this weekend to offer up more of his highly valued opinions on various subjects, including Jenelle’s co-star Kail Lowry and his MTV-money-hungry mother-in-law Barbara Evans.

Before I step out of the way and let David take the reins, I want to point out that his statement that Barbara was fired from Walmart does appear to be true, judging from Barbara’s own statements online. “Well I gave my three week notice at Walmart last week,” Babs posted back in early December, adding she intended to leave right around Christmas time. “They told me they don’t need me anymore, turn in my badge. Wow 12 years I gave to them and in the end I was treated like a dog. No thank you for my 12 years of service. COLD-HEARTED. Oh well, happy retirement to me! I still have my MTV job!”

A couple days later, Babs celebrated with a glass of wine, which she posted a photo of on Instagram along with the caption: “Happy Retirement to ME!!!!!”

OK: back to David Eason’s latest nuggets of wisdom, which eventually lead to his commentary on Barbara and how lucky she is to have all that MTV money rolling in. We’ll start with David coming to the defense of Kanye West, who has been lambasted in the media over the past week after he made comments in support of President Donald Trump: 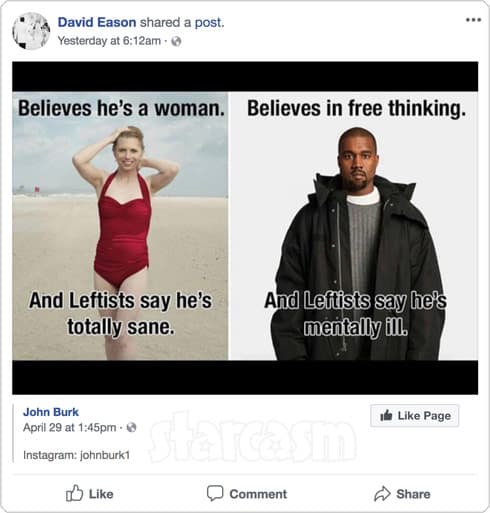 That post was just after the crack of dawn on Sunday, and David returned a couple hours later to share his thoughts on Kail. “So I guess Kailyn Lowry got her keyboard so greasy from cheetos that her finger slipped and said some tough guy sh!t about me and my wife,” David wrote. “Apparently her plastic surgeon filled her head with the same sh!t he filled her ass with ? #nocommonsense”

David later expanded upon his original thoughts by revealing he has no idea what Kail’s “Cheetos fingers” even typed. “I don’t know what she said about me but that doesn’t make her any less of a piece of sh!t,” he pointed out.

“Wait you don’t know but made this status?” a commenter said. “So what does your wife’s snap rants make her?”

As you might imagine, the comments section of David’s post BLEW UP, and David took the time to respond to a few messages. I’ll step out of the way now and let David and the public speak for themselves:

COMMENTER A: MTV will eventually completely cut them off, and when they can’t pay their bills, they’ll no longer have any laaaaaaannnndddd to live on. He really needs to learn when to shut his mouth.

DAVID: But the laaaaand and everything else is paid for. Whatever will we do lmao you have no idea what kind of money I make

COMMENTER B: All of Jenelles children are unfortunately victims of childhoods that they are going to need to recover from. Every one of them, but sure go ahead and pretend like she and David are grade A parents or any better than Kailyn, at least kails kids are happy, normal behaving children, the same can’t be said for Jenelles. Fyi I am NOT a fan of Kailyns, she has her own issues, but you can’t say she’s not a good mom , and doesn’t neglect or abuse her children.

DAVID: You must have had a terrible childhood. Not everyone’s parents are a piece of sh!t, I’m sorry you turned out so bad

COMMENTER B: Haha except I didn’t, I had great parents, nice to see I got under your skin enough to feel the need to comment specifically to me. You can try and deny that your and Jenelles kids have a normal healthy childhood, the truth is all on display for all to see

DAVID: And block you

COMMENTER C: So when’s Jenelle announcing she’s not going to the reunion? Lol. She’s the Farrah of TM2 now. Give it time she’ll be fired to 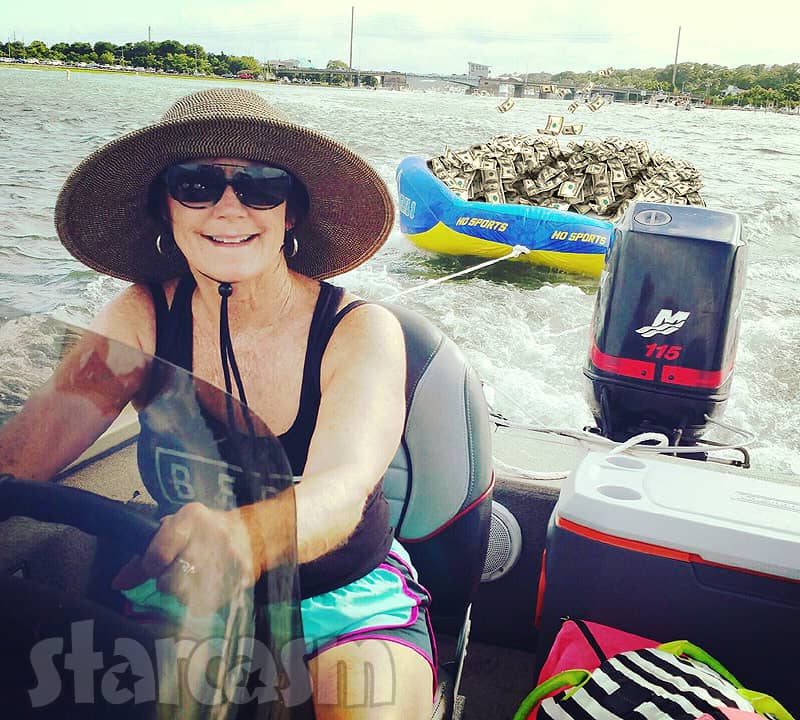 COMMENTER D: You guys seem to forget that Jenelle Eason does have a degree and could get a job if she wanted to quit the show.

COMMENTER B: it’s a little more complicated and difficult to get a job (even with a degree) when you have dozens of mugshots, most of which she is smiling in as if she’s proud. Which, she also blamed kailyn for her not being employable

COMMENTER E: ShE hAs a deGrEe. Couldn’t she not pass the board test? Or maybe her criminal history may make it hard. But go on and get the 12 dollar an hour MA position and save lives girl! ??

COMMENTER B: hahaha like that one time when she was b!tching with or at barb (i can’t keep track) and she said “you work at Wal-Mart and I’m going to be saving lives!”

DAVID: Or like that one time when Barb got fired from Walmart and wouldn’t have sh!t right now if it wasn’t for keeping Jace from his mother so she can get a MTV paycheck. I make more in one month than she made in a year (before she got fired)

COMMENTER F: Did you pop balloons with a knife at the after party? Did they cut you off causes you drank to much? That’s what they said about you

DAVID: All lies. They didnt even bring enough beer for anyone to get drunk. Why do you think everyone was asking where the beer is the whole time 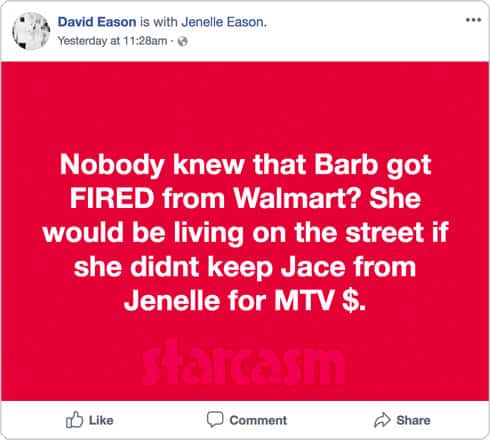