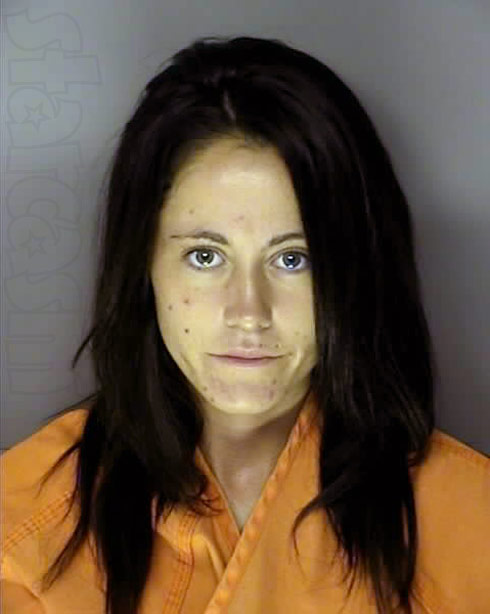 As we previously reported, Teen Mom 2 star Jenelle Evans was arrested Thursday and charged with assault after allegedly throwing a drinking glass at Nathan Griffith’s girlfriend’s head. We now have Jenelle’s latest mug shot photo from her booking, which further expands her rather infamous collection.

Here are all of Jenelle Evans’ mug shot photos to date — that we know of:

Jenelle will reportedly be spending the night in jail while awaiting arraignment and a bond hearing, which should be early tomorrow.

The Ashley’s Reality Roundup reached out to Jenelle’s manager, Johnny Donovan, who summarized the incident by saying, “Nathan provoked her. That’s what he does, he tries to make her look bad and he succeeded today. That’s pretty much it.”

Johnny made sure to point out that he wasn’t there when the incident took place, so he couldn’t confirm or deny that Jenelle threw a glass at the head of Nathan’s girlfriend, whom we assume to be Jessica Henry.

There are rumors that Jessica was also involved in prodding Jenelle. “The Ashley hears that Jessica may have first poured water on Jenelle before Jenelle picked up the glass and hit Jessica with it, but that has not been confirmed yet.”

Police are expected to release the arrest report later today (Friday). If past history is any indication, I assume we can expect the 911 call audio soon after that.