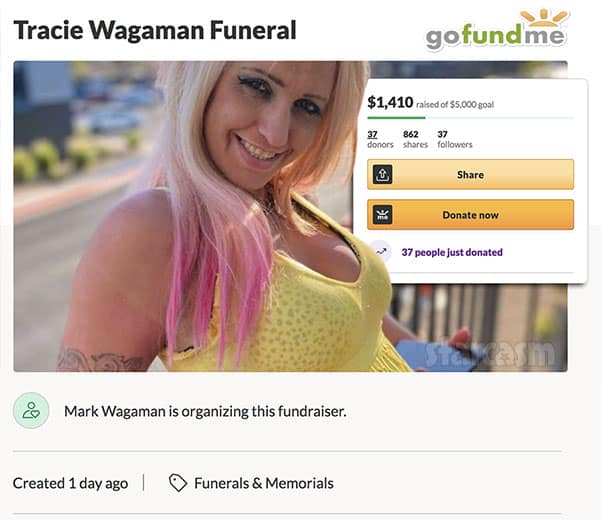 Family, friends and fans of Love After Lockup star Tracie Wagaman Brady are still in shock and mourning after news of her passing broke on Saturday. Tracie’s brother Mark and mother Joanna have started a GoFundMe campaign in hopes of raising money to pay for her funeral and possibly create savings accounts for her two children.

“We would like to use the money to pay for her funeral,” Tracie’s brother Mark writes in the campaign’s description. “If additional money is raised we will put a portion of it in a savings account for her son and if at all possible her daughter. We want to donate the remainder of the money to a domestic violence organization that will be named later.”

Tracie’s mother Joanna shared a link to the campaign on Facebook Sunday. “As many of you know, I lost my daughter,” Joanna wrote. “We are trying to raise some money to help with the expenses of bringing her home. Anything will be appreciated. Thank you.” Tracie was reportedly in Las Vegas when she passed away. She is originally from Texas, and that is where her family resides.

Tracie gave birth to her daughter late last month. The little girl’s father, Luke Loera, is currently in jail, so it is unclear what will happen with Tracie’s daughter. There are unconfirmed reports online that Tracie placed her for adoption, which would seem to line up with her brother Mark’s statement that they would like to set up a savings account for her “if at all possible.”

The GoFundMe account has a goal of $5,000 and has already raised $1,410 in just one day. “We’re overwhelmed with all the support we’ve received from you guys,” Mark wrote as an update. “You have proved that Tracie was deeply loved. I [just] had no idea it was this much. Thank you all for your kind words and willingness to help us with Tracie’s funeral. We love you all.”

Here is the campaign’s full description, which includes Mark talking about his relationship with his little sister Tracie:

My name is Mark Wagaman and I’m Tracie Wagaman’s older brother. Unfortunately she has recently passed away. Our family is deeply saddened with our loss. We know she had many friends and followers who were pulling for her. We greatly appreciate all the positive comments you have posted and sent.

Tracie was always that annoying younger siblings. I remember her dressing up our dogs growing up and thinking she was crazy. She loved dogs. I remember her dressing up as Old Mother Hubbard in a school play. She ran track in Junior High and was always faster than me. Her and I became really close after high-school. I took her to Mexico for the first time. We’d go to the lake and jump off of the damn. She always wanted to be with her nephews. I remember her driving 8 hours one time just to see them. She had a heart of gold. I had some medical issues a few years back and wasn’t able to work. She gave me $500 so I could catch up on bills. If you had the chance to meet her I guarantee she would consider you a friend. She was such a people person.

We would like to use the money to pay for her funeral. If additional money is raised we will put a portion of it in a savings account for her son and if at all possible her daughter. We want to donate the remainder of the money to a domestic violence organization that will be named later.

Thank you again for the reaching out to us and for all the [positive] comments you’ve posted on social media.

There is a link for Tracie’s GoFundMe in the first paragraph, but here’s another.

UPDATE: Tracie’s brother Mark Wagaman did a 32-minute video interview with Sharrell’s World in which he talks about Tracie’s death and her life — including what they know about how she died.

#LoveAfterLockup Tracie Wagaman's brother Mark talks to @sharrell_s about Tracie's death & her life. Topics include the ongoing investigation, online rumors, how the family found out, whether or not Clint Brady has reached out & more. Full video & recap: https://t.co/63ei19PRcf pic.twitter.com/hsIjCiSyyV

For those of you who haven’t been keeping up with Tracie over the past six months or so, I am adding a timeline of some of our recent articles about her and Clint. I think this will help answer some of the more frequent questions I am seeing on social media about Tracie’s marital status with Clint and the father of her second child.

#LoveAfterLockup Tracie Wagaman Brady has reportedly passed away at the age of 41. Tracie's friend and former manager Lily says Tracie passed away on Thursday, July 1, just 1 week after giving birth to her 2nd child. https://t.co/zT2qBADv1t

Congratulations are in order for Love After Lockup and Life After Lockup star Tracie Wagaman Brady as she just gave birth to her second child!

Clint and his goddess Tracie are officially single again! Love After Lockup and Life After Lockup star Clint Brady officially filed for a divorce (along with an accompanying restraining order) back in early March of this year. According to court records, the filing became official late last week.

The father of Love After Lockup star Tracie Wagaman Brady’s second child is back behind bars. Luke Loera was arrested in Las Vegas on Saturday and is currently facing one felony and two misdemeanor charges. Tracie’s pregnancy announcement in May was delayed in part because she was waiting for Luke to be released from jail after he got into an altercation with a casino security guard and pulled out a machete. Tracie has been absent from social media, so its unclear if she has given birth to their baby yet.

Tracie Wagaman recently confirmed rumors that she is currently pregnant, but debunks reports that the baby belongs to Amber Portwood’s ex Matt Baier. (In case you missed it, Tracie and Matt dated for “about a week” last year.) Tracie says the father of her second child is her current boyfriend, Luke Loera, who she accused of domestic abuse earlier this year. Those accusations were accompanied by some very disturbing photos of Tracie’s facial injuries.

March 11, 2021
Clint officially files for divorce from his goddess Tracie

Their love managed to survive a stolen rental car, numerous tossed iPhones, several arrests, and even mother f***in’ crack… But it was all for naught as Love After Lockup star Clint Brady has officially filed for divorce from his goddess, Tracie. And he managed to do it while in jail!?