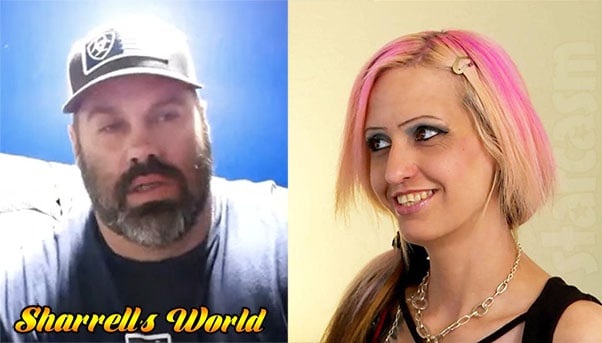 Love After Lockup and Life After Lockup star Tracie Wagaman Brady passed away in Las Vegas on Thursday, July 1. The 41-year-old reality star died just one week after giving birth to her second child, a baby girl. Details about her death have not been released, and the lack of information has unfortunately resulted in some people spreading rumors online.

Tracie’s brother, Mark Wagaman, recently launched a GoFundMe campaign in hopes of raising money for funeral expenses. The responses have been overwhelmingly positive, and that positivity helped motivate him to do an interview sharing information about Tracie’s death — and her life.

Mark’s interview is with YouTuber Sharrell’s World, who has a history of covering Tracie in a positive light. We will recap some of what Mark said in the interview, and we’ve embedded the full 32-minute video at the bottom of this post.

How did Tracie Wagaman die?

Sharrell asks Mark if there is currently an open investigation into Tracie’s death.

When asked if there will be a public memorial service and/or funeral for Tracie, Mark says a decision hasn’t been made, but it is something the family is considering.

How did Mark find out?

“Friday morning at about 7:00 I was about to walk out the door to go to work and I got a call from a Vegas number, which I didn’t answer it at first,” Mark recalls. “The call ended and I called back.” Mark is emotional throughout the interview, but he breaks down at this point and needs a moment to gather himself.

“It was an investigator,” Mark continues. “‘Hi. Are you Mark Wagaman, Tracie Wagaman’s brother?’ I said, ‘Yes ma’am.’ ‘She passed away last night in Vegas.'”

“I was the first person that they found that was related to her.” Mark says he walked over to his mother’s house and she was still asleep. He woke her up and she seemed to know something bad had happened.

“I don’t wish this on anybody,” Mark says of his experience telling their mother. “The screams — I don’t wish it on anybody. It was the most horrible thing I’ve ever dealt with in my life.”

How is Mark’s mother doing now? “She’s not in good shape,” Mark says. “She has her moments when things seem to be getting OK, but…it’s going to be a timely process.”

Has Clint Brady reached out?

Mark says Tracie’s ex-husband, Clint Brady, has not reached out to him or his family. “Personally I’ve never talked to Clint in my life — at least on the phone,” Mark reveals. “I just checked with my mom a couple minutes ago to verify it, and no, he hasn’t reached out to her either.”

Sharrell asks about the reports that Tracie’s mother and Clint’s mother do not get along. “She does not care for that woman,” Mark says of his mom’s attitude towards Clint’s mom. “Not one bit.”

In addition to never speaking with Clint, Mark also reveals that he is not very familiar with Love After Lockup. He says he watched one full episode and part of another before calling it quits on the original show and the Life After Lockup spin-off. “It was just bringing attention to the family that I didn’t really care for,” Mark says.

“[Tracie’s] the type of person that she could walk in a room of people and at first you’re gonna go, ‘Man, this girl’s crazy!’ You know?” Mark says of his late sister. “But I guarantee you, you give her a minute or two and you’re gonna love her to death. Absolutely love her! She has that, just that personality. She can talk to anybody and just, you know, just put a smile on their face.”

“I don’t want people to think that my sister is what you saw on the show,” Mark says later in the interview. “Yes, there are bits and pieces of it that may be true, but like I said earlier, if you had met her, I’m telling you you would have fallen in love with her…She really was a loving individual and cared for a lot of people…I’m really finding that out here in the last couple days.”

Mark recalls when he was having vision problems and was on disability for a couple years. Things were really financially tight for him. Tracie was working outside in the 100+ degree heat working 10-12 hours a day, and she gave him $500 without him asking for anything.

Mark also wants people to know that they had a great childhood and they were raised in a loving home. That love continued throughout Tracie’s life as evidenced by the fact that she called her mom almost every day.

Unfortunately, Tracie and Mark had not spoken for a while due to an argument they had. “Last time I talked to my sister on the phone I chewed her out,” Mark reveals through tears. “I guess I figured if I yelled at her and chewed her out she would wake up. Unfortunately it didn’t happen.”

Mark says that it’s impossible not to feel some guilt about his sister’s passing. Even so, he knows he did what he could. “I’m not going to say I gave up on her, but there was nothing else I could offer her,” Mark says. “And all I could do was sit back and hope to God that she would ask me for help one day.”

Sharrell asks Mark what his advice would be for others who are close to someone struggling with addiction. “Do what you can for your loved ones,” he answers. “Just definitely do what you can because I’m telling you, you don’t want to live with these regrets. I know it wasn’t my fault, but it comes and goes — you know, the what ifs. It’s such a horrible feeling.”

Other moments from the interview

• Mark shares some of his early memories with Tracie, including the first time he found out she was using drugs. When Tracie was 14 or 15, Mark recalls finding a large ZipLoc bag full of pills in her room and not telling their parents. Shortly thereafter, Tracie had a medical emergency due to taking to many drugs and an ambulance arrived at the house where EMTs pumped Tracie’s stomach.

• Mark says Tracie always wanted to be an actress and/or a model. “I guess she got pretty dang close,” he admits.

• Mark and his mother were aware of the domestic violence issues Tracie was having with Luke.

• Mark says he didn’t really support the idea of doing a GoFundMe initially because he thought people would have a negative reaction. After people contacted him asking if there was one set up, he had a change of heart. He spoke with his mom, and she was OK with the idea, and that’s when he started it.

• Near the end of the interview Mark suggests that there may be one or more people out there who owe Tracie money. “If you owe my sister money, do the right thing and take care of it,” he says.

• The topic of Tracie’s newborn daughter didn’t really come up, other than Mark insisting that Tracie loved both of her children.

• Mark says he is not interested in doing any sort of interview with any one else, so please do not reach out to him.

From Mark to Tracie’s fans:

To all the people that follow her — her fans. Thank y’all so much. Oh my God, I was so scared there was going to be so much negative stuff on there, and of course there is somewhat, but 99 percent of it has been positive. So thank y’all. It’s helping with the grieving process honestly.

Below is the full interview, and I recommend watching the whole thing. As Perry Sanders talks about in the latter half of the video, it’s easy to objectify people that are on television and forget that they are actual people with families and friends. Tracie clearly made a lot of bad decisions in her life, but there are SO many people who have met her who have nothing but wonderful things to say about what she is like in person. Mark is certainly no exception.

On a side note, I want to thank all of our followers on the various social media platforms. I was like Mark in that I was fearful that the news of Tracie’s passing might elicit negativity, but the responses have been almost completely positive. Thank you all for that.