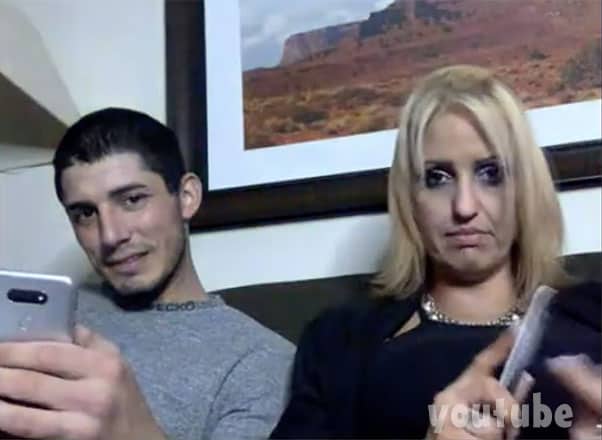 Former Love After Lockup star Tracie Wagaman Brady announced in May that she was pregnant and the dad was her on-again, off-again boyfriend (and domestic abuser) Luke Loera. Tracie didn’t reveal how far along she was at the time, but she showed off her baby bump and it was quite sizable.

She explained that part of the reason she delayed the pregnancy reveal for so long was because she was waiting for Luke to get out of jail. He was serving time after getting into a fight with a casino security guard and pulling out a machete.

In our post about Tracie’s pregnancy reveal we shared some of Luke’s rather extensive criminal record, which included at least five domestic violence charges. (Those five charges did not include the time he bloodied Tracie’s face during an altercation earlier this year because she did not press charges.)

It seems Luke is back to his old ways as he was arrested in Las Vegas Saturday on yet another felony charge. According to court records, Luke was charged with use or possession of stun gun by a felon, which is a felony. He has also been charged with use or possession of drug paraphernalia and driving without a license, both of which are misdemeanors.

Luke’s next scheduled court date is a status check on Tuesday.

Tracie has essentially been completely absent from social media recently, so it is unclear if she has given birth to her baby. It’s also unclear if she and Luke are/were still together.

“Me and Luke, we had our issues going on, and we were, you know, arguing, fighting whatever,” Tracie said in May. “My heart chose to take him back. Now, that that might have not been the right choice, but it’s my choice. I love him and we’re working it out, so things are going a lot better, you know, because I am expecting.”

#LoveAfterLockup Tracie Wagaman confirms she is pregnant with boyfriend Luke, debunking rumors that the dad is Amber Portwood's ex Matt Baier, whom Tracie dated last year. Tracie is back with Luke despite a domestic violence incident earlier this year. https://t.co/bWMgL1644Y pic.twitter.com/IyJ7cQsUdO