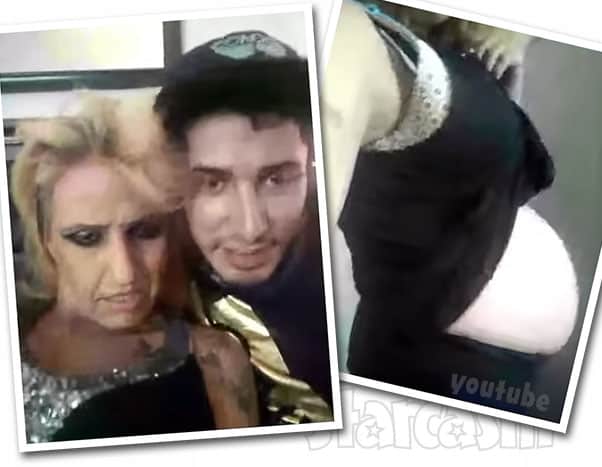 Former Love After Lockup and Life After Lockup star Tracie Wagaman recently confirmed rumors that she is currently pregnant, but debunks reports that the baby belongs to Amber Portwood’s ex Matt Baier. (In case you missed it, Tracie and Matt dated for “about a week” last year.) Tracie says the father of her second child is her current boyfriend, Luke Loera, who she accused of domestic abuse earlier this year. Those accusations were accompanied by some very disturbing photos of Tracie’s facial injuries.

Let’s start with the pregnancy announcement. Tracie and Luke appeared live on YouTube with Amzi Beloved last week and made the reveal. (Full video embedded at the bottom of this post.)

“Let me confirm that rumor…yes, I’m expecting,” Tracie says early in the interview. “And Matt Baier is not the father. That’s all I’m going to say about Matt.” Tracie goes on to say that she doesn’t know where that rumor came from before moving on to another rumor involving her estranged husband, Clint Brady.

“Also, I wanted to say that the baby is not a Brady. I don’t know where that came from, but if they take my baby away or whatever it is, how or why my husband would get it I don’t understand.”

The hosts ask Tracie if she is OK revealing her baby bump, and Tracie obliges. Tracie’s bump is quite large, so it’s clear she is pretty far along in her pregnancy. When asked just how far along she is, Tracie is reluctant to share specific details. “We’re not going to disclose that,” she says, before confirming that it isn’t eight months like the rumors online.

So why has Tracie, who is usually quite active online, stayed away from social media and not revealed her pregnancy until now? “I have not been on media at all. I’ve been trying to keep everything private. I didn’t want the world to know — I wasn’t ready yet.”

Tracie then reveals another reason that she was waiting to announce the pregnancy, which was that Luke has been behind bars. “I was waiting on Luke to get out of jail,” Tracie continues. “He went to jail for some unrelated charge.” Tracie makes the “unrelated” distinction because she has previously accused Luke of domestic violence, accusations that she backed up with disturbing photos of her facial injuries earlier this year.

“Me and Luke, we had our issues going on, and we were, you know, arguing, fighting whatever,” Tracie says. “My heart chose to take him back. Now, that that might have not been the right choice, but it’s my choice. I love him and we’re working it out, so things are going a lot better, you know, because I am expecting.”

When the photos of Tracie’s injuries were posted online, she also shared a post promoting domestic violence awareness. “Domestic violence m*tha f*cking sucks,” the text in the image reads. “Don’t let your partner mentally or physically abuse you. There are resources. Get help. Your life is worth it.” Here is the original post:

After Tracie outed Luke as a domestic abuser, she got a tidal wave of support from her fans — including those offering a little payback on Luke. Tracie acknowledged the support she received during her interview last week:

I want to thank everybody that had my back when me and Luke had our little, um, issue going on. Everybody that threatened to kill Luke, you know, thank you for that. But we’re good now…All jokes aside, I really do appreciate all the support y’all gave me. It might not be right that I got back with him, but he deserves a second chance. You know, he’s the father of my child. That baby needs a daddy, so we’re trying that again.

Luke spoke for himself and revealed that he is a changed man thanks to the baby being on the way. “I’m getting older, you know? That’s the whole thing — when we’ve come to a realization and actually just make a decision in your life to actually just be, like, ‘Okay, now I gotta stop. Now I gotta man up and just commit to my own responsibilities and actions.'”

The baby will be the second child for both Tracie and Luke.

Tracie and Luke also talk about his recent stint in jail, and they reveal that it was after an altercation with Las Vegas casino security guard earlier this year. “He’s a gangster for real,” Tracie says of her baby’s dad, “because we were at a casino and we got into it with one of the guards and the guard hit him.” Tracie said that she asked the security guard why he wouldn’t hit her, and that’s when things escalated Amber Portwood style.

“[Luke] pulled a machete out on the guard,” Tracie says.

Just after the casino brawl, Luke showed that Tracie wasn’t the only one who could share facial injury photos on social media. He captioned a graphic Instagram photo of his injuries by writing: “This is what happens when security thinks that your a threat and you stand up for yourself and they do slam you into a machiene [sic] and split your eyebrow it hurt like hell plus they fractured my wrist and now there is a scar on my left eye now.”

I checked court records and, sure enough, Luke was charged with carrying a concealed machete on May 11. (Yes, the statute specifically pertains to machetes.) Luke pleaded guilty and was sentenced to 20 days in jail on May 13. He was credited with 20 days time served, which is why he was able to participate in the interview last week. Tracie revealed at one point that Luke had gotten out of jail earlier that day.

While I was researching Luke’s machete arrest, I decided to look a little further into his criminal history — and it is nothing short of disturbing. He had five separate domestic violence charges between 2010 and 2020. That doesn’t include anything stemming from his altercation with Tracie because it doesn’t appear that she ever filed any charges — at least not in Clark County.

Luke was also charged with child endangerment in 2013. In addition to those domestic charges, Luke has a laundry list of other charges related to drugs, burglary, trespassing, and more. Here’s a screen cap from one of the search results: 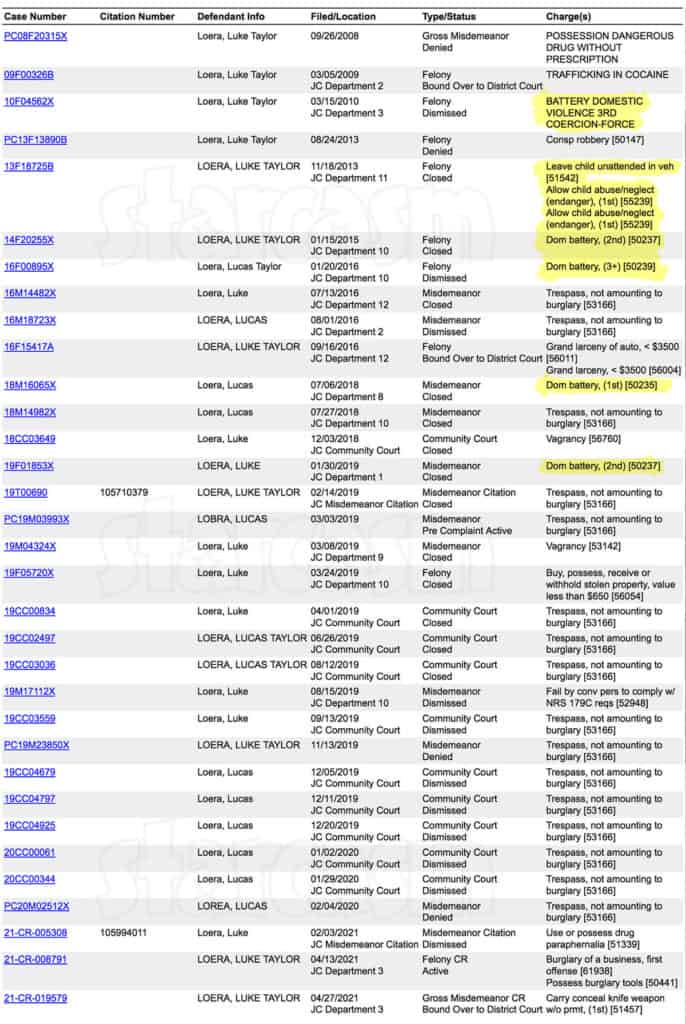 The odds are obviously stacked against Tracie and Luke having a happily ever after, but I certainly wish them the best.

Here’s the full interview with Tracie and Luke — they join the conversation right around the 8:45 mark: