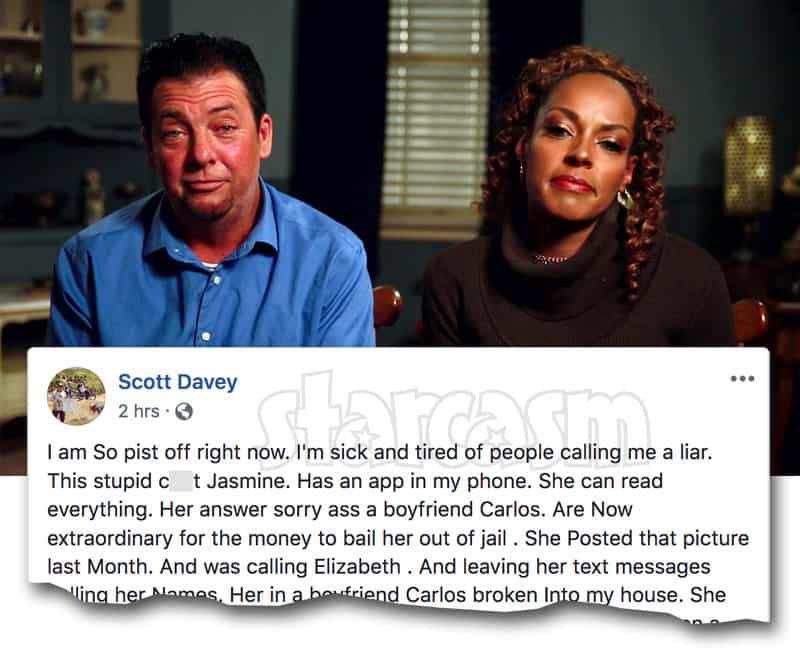 The Love After Lockup Season 2 finale had a lot of huge surprises, but perhaps none any bigger than Lizzie’s prison sugar daddy Scott Davey moving on with a woman named Jasmine that seemed smart, funny, and really into Scott! Unfortunately, it looks as though Scott was just getting played again — perhaps even worse than he was with Lizzie.

Scott first hinted that his relationship with Jasmine was breaking bad with a Facebook post on Tuesday. He began by referring to her as “my friend Jasmine or so called friend” before claiming that she had faked some letters posted online. (It’s unclear what those letters say.)

“Her and her boyfriend have been trying to extort money For me,” Scott continues, before adding that the two of them had been posing as him. “They stole my phone. She’s The one that posted the picture last month. She has ruined my relationship with Elizabeth.” Scott concluded his post, but teased more to come. “I’m at work I’ll post the threats later.”

Scott didn’t post the threats, but he did return to Facebook to hurl more accusations at Jasmine and her actual boyfriend Carlos — including claims that they broke into his house and Jasmine “slept with everybody else but me.”

I feel that breaking down Scott’s post into quotes would be a disservice. Reading it in its entirety is the best way to get a feel for just how betrayed and angry he feels:

I am So pist off right now. I’m sick and tired of people calling me a liar. This stupid c*nt Jasmine. Has an app in my phone. She can read everything. Her answer sorry ass a boyfriend Carlos. Are Now extraordinary for the money to bail her out of jail. She Posted that picture last Month. And was calling Elizabeth. And leaving her text messages calling her Names. Her in a boyfriend Carlos broken Into my house. She has slept with everybody else But me. I guess I’m That ugly Not even a Hooker will sleep with me. I’ll send the threats over to social media.

I have a challenge for Elizabeth. If I’m such a liar. I’ll go on doctor Phil Take a lie detector And she can ask me any questions she wants. But I can ask her any question to. If she doesn’t wanna do it I’ll do it alone. I’m not lying about Anything. But getting called a liar That p*sses me off. And excuse my spelling I know people are just gonna talk sh*t

I’m genuinely saddened by all this. I wasn’t really all that bummed when Lizzie broke things off with Scott because we all knew that was going to happen. But, I was really hopeful that Scott had somehow, someway managed to stumble into a real deal relationship with someone who would respect him and treat him well. Oof.

We will certainly continue to monitor the situation, and update there are any major new developments.

#SPOILERS Here are all of the updates from the #LoveAfterLockup Season 2 finale. Which one surprised you the most? I have to vote for @scottloveafterlockup having a girlfriend who seems really smart, funny, and positive! #DidNotSeeThatComing

LOVE AFTER LOCKUP Britney and Ray spoilers – Are they still together?