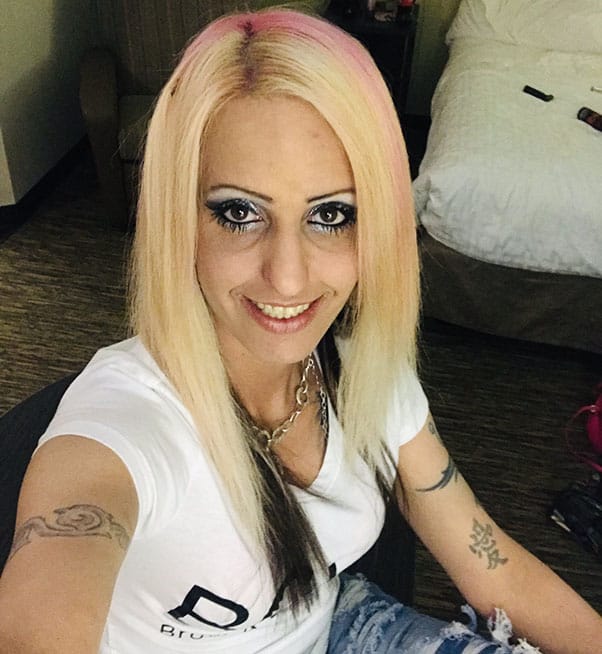 We have some sad news to report for fans of Love After Lockup as show star Tracie Wagaman Brady has passed away at the age of 41.

We heard several reports of Tracie’s passing over the past 24 hours, but we were waiting for confirmation before reporting. That confirmation came from Tracie’s friend, and former manager, Lily Red earlier today. Lily confirmed that Tracie passed away on Thursday, July 1, just one week after giving birth to her second child.

“I just wanted to confirm — I have some sad news about Tracie,” Lily says in an Instagram video, included below. “Unfortunately, Tracie passed away on July 1. I’m not going to release more details at this time. I just hope that we are praying for her family. I don’t know what else to say…Keep her family in your prayers.”

Lily later iterates the confirmation and adds: “I know her family has been notified.”

Lily concludes with a loving message about Tracie:

She was a good person, and she was kind, and she loved her fans. And she loved having her fans love her. She loved it. And her family is, I’m sure, heartbroken. There’s nothing else to say except rest in peace Tracie, and you were loved. You were a good person and I’ll miss you a lot.

Tracie also reportedly made up with her ex-husband Clint Brady’s girlfriend, Genevieve Bailey, recently. Gen posted a VERY emotional video about Tracie’s passing on Instagram moments ago and revealed that they recently spoke and Tracie even sent her photos of her baby. During the video, Gen is told that Lily had confirmed Tracie’s passing. Gen’s Instagram account is set to private, so I am unable to embed it here.

I want to join Lily in expressing my sadness over Tracie’s passing, and in sending my condolences to her friends and family. Tracie certainly had her issues, and there have been people that she negatively impacted with her actions, but she did seem like a very caring person with a wonderfully humble sense of humor. Rest in peace Tracie.

We will continue to monitor the story and will update if we learn more.

UPDATE – Tracie’s brother and mother have set up a GoFundMe campaign in hopes of raising money to cover Tracie’s funeral expenses as well as setting up savings accounts for her two children.

UPDATE: Tracie’s brother Mark Wagaman did a 32-minute video interview with Sharrell’s World in which he talks about Tracie’s death and her life — including what they know about how she died.

For those of you who haven’t been keeping up with Tracie over the past six months or so, I am adding a timeline of some of our recent articles about her and Clint. I think this will help answer some of the more frequent questions I am seeing on social media about Tracie’s marital status with Clint and the father of her second child.

Congratulations are in order for Love After Lockup and Life After Lockup star Tracie Wagaman Brady as she just gave birth to her second child!

Clint and his goddess Tracie are officially single again! Love After Lockup and Life After Lockup star Clint Brady officially filed for a divorce (along with an accompanying restraining order) back in early March of this year. According to court records, the filing became official late last week.

The father of Love After Lockup star Tracie Wagaman Brady’s second child is back behind bars. Luke Loera was arrested in Las Vegas on Saturday and is currently facing one felony and two misdemeanor charges. Tracie’s pregnancy announcement in May was delayed in part because she was waiting for Luke to be released from jail after he got into an altercation with a casino security guard and pulled out a machete. Tracie has been absent from social media, so its unclear if she has given birth to their baby yet.

Tracie Wagaman recently confirmed rumors that she is currently pregnant, but debunks reports that the baby belongs to Amber Portwood’s ex Matt Baier. (In case you missed it, Tracie and Matt dated for “about a week” last year.) Tracie says the father of her second child is her current boyfriend, Luke Loera, who she accused of domestic abuse earlier this year. Those accusations were accompanied by some very disturbing photos of Tracie’s facial injuries.

March 11, 2021
Clint officially files for divorce from his goddess Tracie

Their love managed to survive a stolen rental car, numerous tossed iPhones, several arrests, and even mother f***in’ crack… But it was all for naught as Love After Lockup star Clint Brady has officially filed for divorce from his goddess, Tracie. And he managed to do it while in jail!?