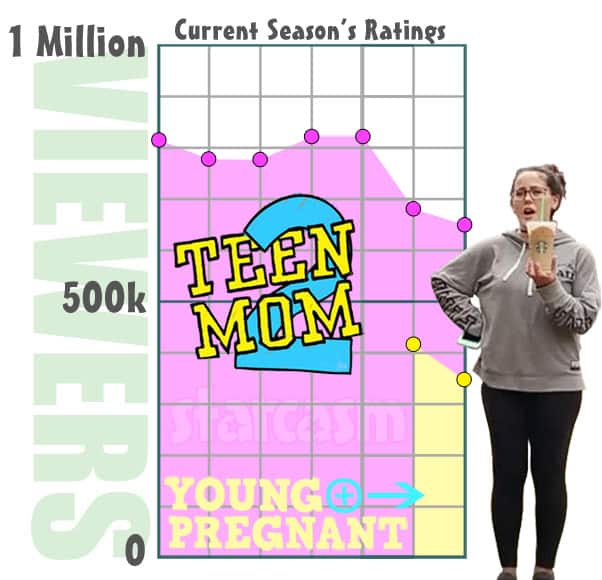 Teen Mom: Young and Pregnant returned this week with two new moms and two new one-hour episodes. Unfortunately for MTV, the show delivered VERY lackluster ratings for both episodes, despite following its nine-year-old big sister Teen Mom 2. Speaking of Teen Mom 2, the viewership for the former ratings juggernaut were way down as well.

The premiere episode of Teen Mom: Young and Pregnant had just 410,000 viewers tune in Tuesday night, and that number dropped to 350,000 by the second episode. Those numbers are down from the last five episodes of the previous season, which averaged a little over 529k. This has to be extremely disappointing for MTV executives after the show’s inaugural season (or half season) finished up with two episodes watched by well over 800,000 viewers each.

For comparison, MTV’s Pretty Little Mamas premiered with 440,000 viewers late last year. After dropping to 317,000 the following week, MTV pulled the show with no official announcement. They would later re-edit the series and repackage it as Teen Mom: Young Moms Club. The revamped series premiered in April right after Teen Mom 2, but only managed to bring in 304,000 viewers. The series wrapped with a finale that mustered just 277,000 viewers. It is assumed that the series has been cancelled, but there has been no official announcement from MTV.

Teen Mom 2 continues to fall in the ratings after the departure of their drama fountain Jenelle Eason. Producers replaced Jenelle with another drama fountain, Young and Pregnant’s Jade Cline, but the attempted “flex tape” fix has not stopped the ratings leak.

The current season premiered on September 10 with 810,000 viewers, and managed to maintain an average above 800,000 through five episodes. However, the two most recent episodes dipped to 692,000 and 665,000 respectively. And remember, this is a show that averaged close to 4 million viewers an episode in its first season!

I do want to point out that the Teen Mom 2 ratings have been on a relatively steady decline for a while, even before Jenelle’s departure.

THE RATINGS THAT MATTER

As we have pointed out before, raw viewership isn’t the most important statistic when measuring the value of a show. The most valuable demographic for advertisers (and thus networks) are viewers between the ages of 18 and 49. If you visit television ratings sites such as Showbuzz Daily or TV By The Numbers, you will notice that the shows are ranked based on the percentage of this viewing audience that tuned in to the show, not how many viewers total.

By this metric, Teen Mom 2 is still a big success for MTV. For example, the most recent episode only brought in 665,000 viewers, but it was still the sixth most valuable show on cable Tuesday night with a .35 P18-49 rating. It was actually the third most valuable non-sports telecast, behind The Real Housewives of Orange County on Bravo and The Mayans on FX. It beat out Counting On despite the TLC series nearly doubling the viewership of Teen Mom 2 with 1.218 million. (Teen Mom 2 episodes during its first season averaged well over 2.0 P18-49 for comparison.)

Another important factor to figure in when talking about Teen Mom 2 is the fact that the show is one of the top few shows on cable as far as people DVRing it and watching it later. The live viewership is usually almost doubled over the course of a week. Also, I don’t believe the official Live +7 rating includes viewership from streaming, which I assume is a very popular alternative for Teen Mom 2 viewers. (I don’t know how ad revenue changes when you go from live viewing to streaming or DVR viewing, but I would assume that it drops. If you’re watching the show live, you can’t fast forward through the commercials!)

My apologies for all the numbers — I’ve been a ratings fan for years now and I find it all very fascinating. I’ve also been a Teen Mom 2 fan for years as well, and speaking as a fan, I find myself a little less inclined to tune in these days. I’m extremely happy for Kail, Leah, and Chelsea in that they all seem to have found stability and success in their lives. However, I really don’t want to tune in and watch them take tropical vacations and/or shop for new homes every week.

Jade certainly brings the drama, but for me, it’s just not as entertaining as Jenelle’s drama was before David. On the most recent episode, Jade let her mom Christy (who has drug problems and is living in a hotel) watch her daughter for the night. She gave her mom $200 so that she could pay to turn on her phone service, but Jade was still unable to reach her the next day. The result for Jade (and viewers) was an unsettling feeling of concern and anxiety.

I like watching compelling stories about people in difficult situations, but Jade’s current situation just makes me sad.

Briana DeJesus certainly has lots of baby daddy drama! But, with Devoin on the outs, Luis a no-show for everything, and John seeming like a quiet and completely normal guy, it doesn’t leave a whole lot for producers to work with. That being said, I much prefer the situation this season over the Briana and Javi (and Kail) story line!

The ratings struggles for the Teen Mom franchise might lead some to speculate that the US TV audience is just tired of reality shows about young girls having children, but the HUGE success of TLC’s Unexpected clearly illustrates that is not the case. Sunday night’s episode of Unexpected brought in 1.423 million viewers! That equated to a .42 P18-49 rating, but I’m guessing that the Sunday night cable viewership is larger overall than Tuesday night. The success of Unexpected is extra sweet for TLC and producers because the cast members on that show are getting paid next to nothing compared to some of the original cast from Teen Mom 2.

Many have speculated that MTV took a cue from the success of Unexpected when they decided to add two new pregnant girls to Teen Mom: Young and Pregnant. They have added numerous moms to the Teen Mom shows before, but never a pregnant first-time mom like Kiaya and Rachel.

As far as the future of Teen Mom: Young and Pregnant, I’ve learned that you need about three weeks to begin to get a read on how a show is resonating with the audience. Do people keep tuning in? Is there a positive buzz about the show that brings in new viewers? Usually, by the third week you can kind of get a feel for it. I believe that Young and Pregnant will rebound, but I don’t know if it will be enough.