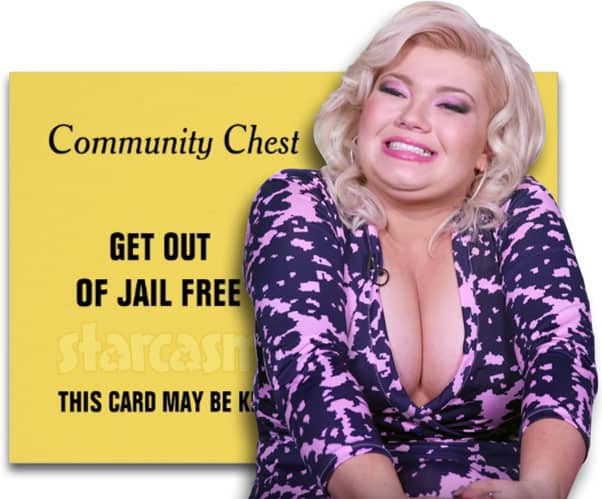 Teen Mom OG star Amber Portwood has reportedly worked out a plea deal stemming from her July 5 domestic violence arrest that means she will not be serving any time behind bars — if she stays out of trouble.

US Weekly broke the news earlier today. The site’s source says that Amber managed to reduce the three felony charges against her down to just one. She will be serving one year of probation as part of the deal. “Provided that no problems arise during the year-long probation period,” the site reports, “her felony charge will be lowered to a misdemeanor.”

It is unclear what the single remaining felony charge is.

Given that this is a domestic violence case, I would assume that the plea deal decisions must have been made by prosecutors and not Andrew. One year of probation seems exceedingly generous based on the fact that Amber has a previous conviction for felony domestic violence.

It’s unclear if the plea deal will mean that the evidence against Amber will be sealed. Prosecutors revealed that they planned to include multiple videos, audio recordings, and text messages in the case.

The plea deal comes just after Andrew and Amber reportedly reached a temporary custody agreement for their son James. The Ashley’s Reality Roundup reports that the agreement gives Andrew full physical custody of James, and the couple will share joint legal custody.

Amber will be able to have supervised visitation with James according to Indiana guidelines. Those guidelines state that Amber can have three visitations with James per week, two of them for up to three hours, and one of them for up to ten hours. She will also be allowed to have one overnight per week if she has “exercised regular care responsibilities for the child.”

The guidelines also allow for eight-hour visitations on holidays, as long as Andrew agrees.

These new guidelines are only temporary until the custody case reaches a final resolution in court.

In other developments in the custody case, it has been officially determined that Andrew is James’ father. Also, Andrew has agreed to not move to California until the case is fully settled.

The couple also agreed that MTV would not be allowed to film James, and the couple will not be posting photos of James on social media.

Despite James not being able to film, Amber is reportedly filming for the new season of Teen Mom OG.

The Teen Mom franchise has featured a few mothers over the years with extensive legal issues, but Amber will be the first to lose full physical custody of two children to two different people. Teen Mom 2′s Jenelle Eason surrendered full custody of her son Jace to her mother Barbara Evans soon after he was born. (Catelynn and Tyler Baltierra placed their first daughter Carley for adoption, but that’s clearly a different situation.)