After a big season filled for the first time with references to their fame and each other, Teen Mom OG is again shaking up the format with 90-minute finale on May 25.

Throughout the season viewers have seen how life in the public eye shapes each of these women as they continue to raise their children and face the demanding responsibilities of motherhood. The finale will be full of “firsts” as Catelynn and Tyler leave Nova under April’s care for the first time while Maci and Taylor find their dream home. Simon finally meets Sophia as Farrah pressures him for an engagement and Amber’s family questions Matt’s intentions when his past is revealed.

After the super-sized season ending, the ladies will come together again the next two weeks for the Teen Mom OG Finale Special: Check-Up with Dr. Drew. Considering how their group meeting played out during last week’s episode (and on social media), the reunion should be one of the most interesting in Teen Mom history… Remember how the girls just used to ask each other random questions like, “How is it to co-parent with so-and-so?”

“Dr. Drew Pinsky brings the cast together to recall the highs and lows from their return to the spotlight. They will get to the bottom of Maci’s decision to pull Bentley off the show, Amber’s questionable relationship with Matt, Catelynn’s new struggle with motherhood and Farrah’s dramatic return. Plus, the girls come head to head and address the conflicts that have built up between them throughout the season,” MTV said in a press release. “Additionally, the network will air Teen Mom OG: Unseen Moments, where Dr. Drew and the girls will dish on never-before-seen moments and give viewers special behind-the-scenes secrets from Teen Mom OG.” 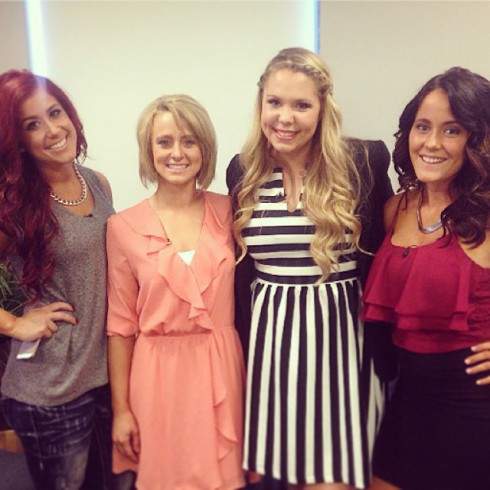 After the season really, really wraps up in June, fans won’t have to wait long for another Teen Mom fix: Although the Teen Mom 2 season doesn’t officially begin until July 9, MTV also announced today a Teen Mom 2: Catch Up Special will air on June 22 “to give viewers a crash course on what has occurred in Leah, Kailyn, Chelsea and Jenelle’s lives since last seeing them on television.”

On top of all that teen drama (even though the Teen Moms are all 20+), MTV is premiering True Life: Save My Teen Marriage after the first part of the Teen Mom OG: Reunion on June 8. Here’s more on that from the network: “In the episode, two couples, who married too young and are ready to call it quits, are given the chance to re-evaluate their relationship to see if they’re in it for the long haul. By experiencing a trial separation for 30 days, they’ll get a peek into what their lives would be like without the other. Once time is up, they’ll reunite and decide whether to stay together or split up for good.”

Continue watching this season of Teen Mom OG on MTV on Mondays at 10/9c.