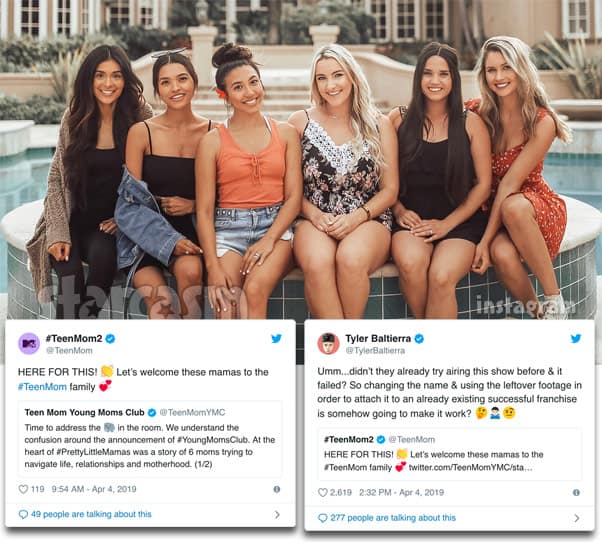 MTV made the surprise announcement last week that they will be bringing back their prematurely cancelled reality series Pretty Little Mamas under the new title Teen Mom: Young Moms Club. The series originally premiered with very low ratings on August 30, and those numbers tumbled greatly the following week. MTV would end up pulling the show with no explanation before the third episode even aired.

Fast forward seven months and the network announces the rebranding and an April “premiere” date — once again without any sort of explanation for why they made the change, or how the show would be different.

The show’s official Twitter account finally addressed the elephant in the room with a statement about the title change, although they still left a lot of questions unanswered. Here is the statement:

Time to address the 🐘 in the room. We understand the confusion around the announcement of #YoungMomsClub. At the heart of #PrettyLittleMamas was a story of 6 moms trying to navigate life, relationships and motherhood. We quickly realized that story is best told through the #TeenMom lens. You’ve seen some of their journey, but we hope that you’ll take a chance to experience the rest.

Pretty Little Mamas was distinctly different from the Teen Mom series in that it seemed to be inspired more by very heavily scripted pseudo reality shows like The Hills. The production and editing were also very different, due in large part to the fact that the show’s producers were not the same as the Teen Mom shows.

That does look a lot more like a Teen Mom show than the original Pretty Little Mamas. I wish they would stop trying to push the “brand new series” angle, though.

UPDATE – You can see the differences between the two shows much better by watchinf their preview trailers! Here’s a link:

The unexpected addition to the Teen Mom franchise did not go over very well with at least one OG cast member. Tyler Baltierra responded to the statement from @TeenMomYMC explaining the rebranding with his less-than-enthusiastic reaction. Actually, Tyler was responding to the official Teen Mom Twitter account, which was asking their followers to welcome the new additions to the Teen Momiverse:

Umm…didn’t they already try airing this show before & it failed? So changing the name & using the leftover footage in order to attach it to an already existing successful franchise is somehow going to make it work? 🤔🤷🏻‍♂️🤨 https://t.co/doM8RBQmws

Another Twitter user replied to Tyler by observing that “the tea is exceptional this morning.”

I’m just speaking facts, you all deserve the truth! I’m not about to let the people who truly support the franchise, be attempted to have their loyalty & intelligence insulted by this overcrowded corporate decision. I have nothing against it all, just don’t agree with the approach

On a side note, is anyone else worried that this ploy might work and the result will be more resurrected MTV series repackaged as part of their successful franchises? Here are some potential examples:

Stranded with a Million Dollars —> The Challenge: Fiji Newbs