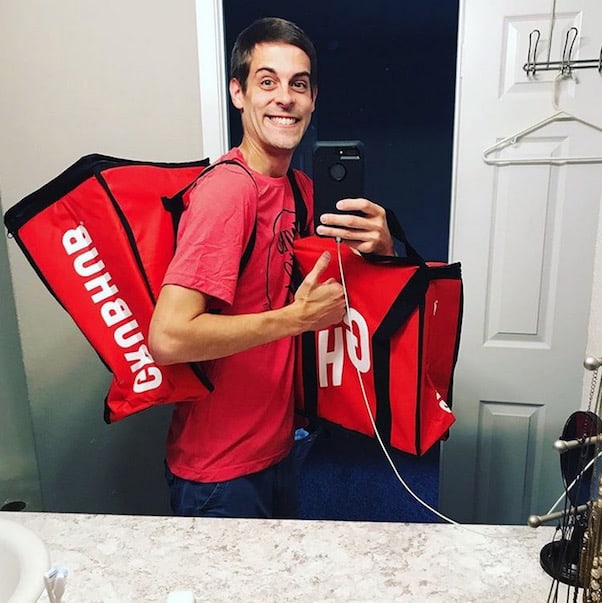 The ongoing battle between Derick Dillard and Jim Bob Duggar over the Duggar family’s finances just took a strange and unexpected turn. Derick chose now to respond to some very old tweets questioning his connection to Jim Bob’s financial arrangements involving the Duggars’ reality TV earnings. In the process, Derick made a surprising suggestion of his own.

It’s no secret that Derick has had a rather colorful work history since getting fired from Counting On over a year ago. As you can see from the photo at the top of the article, he’s been working as a Grubhub driver; he’s a part-time crowdfundraiser for his own still-unlaunched ministry; and he’s currently a law student, which doesn’t pay but could lead to a job one day. (We should also note that Derick’s wife Jill is shilling on social media for a sex tips company.)

And we should further preface the latest Derick Dillard and Jim Bob allegations by reminding you it’s entirely possible that neither Derick nor Jill were ever actually paid for their Counting On appearances. As we’ve written before, Derick’s suggestion that the two of them were simply “volunteers” on the show lends weight to the likelihood that Jim Bob’s children and their spouses have all or almost all signed their salaries and appearance fees over to him.

In short, this would mean that the Duggars’ contracts with TLC, and their suitors’ estimated $2,000 to $4,000 per-episode payments may go straight to Jim Bob, who could then dole out the money as he sees fit. (At the peak of their reality TV fame, the Duggars’ estimated net worth was somewhere around $3.5 million.)

Having said all that, here’s the latest on Derick Dillard and Jim Bob. On December 4th, 2017, Derick tweeted out “Don’t compromise your values for your voice,” and shortly thereafter made it his pinned tweet. Naturally, the tweet got plenty of comments; just as naturally, Derick ignored almost all of them. But this past week he actually responded to a few — and his responses all appear to suggest that Jim Bob does indeed keep all the family money for himself.

In the first exchange, Derick brought up his old beef over not getting paid for the 19 Kids and Counting special episode featuring he and Jill’s son Israel’s birth. Derick said he “thought it was fair to ask” that TLC pay the hospital bill for Israel’s delivery, and further pointed out that the network profited handsomely from the episode:

TLC made lots of money in filming a birth special episode, and they had not offered to pay us anything. So I thought, at the very least, they could reimburse 5-10K for medical expenses. TLC sure made more than that off of us….We do [believe in health insurance], but there are still deductibles. 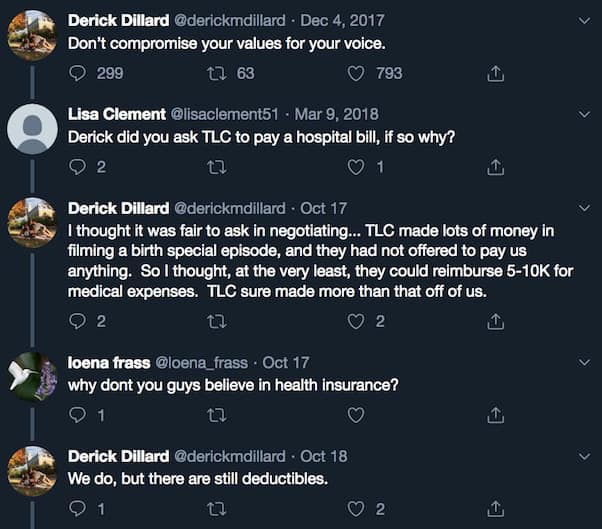 When then asked why Jim Bob gets “all the money for the show and doesn’t give any to…his children” — something that, again, has never actually been confirmed — Derick didn’t say that that’s not how the arrangement works. Nor did he say nothing at all. Instead, he replied, “I don’t know. You would have to ask him that.”

Finally, Derick also responded to a separate comment on his pinned tweet, one asking if Jim Bob was still Derick’s “voice.” I feel I should once again point out that Derick’s original tweet is almost two years old, and the question about giving his “voice” over to Jim Bob is from March of 2018 — it’s not like it somehow made its way to the top of Derick’s mentions. Having said that, Derick was once again curt in his response: “No, and never has been.” 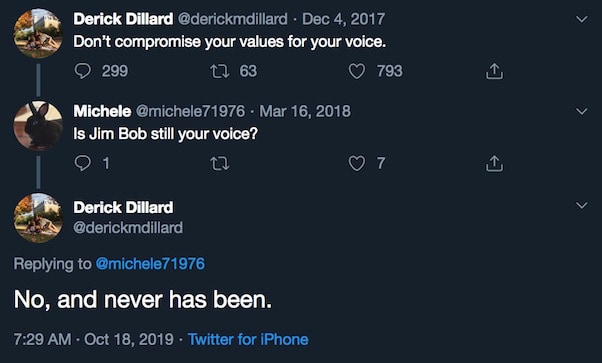 Of course, the Duggar patriarch himself has yet to respond publicly to any of Derick’s suggestions or taunts. But, unless he’s turning the other cheek toward his son-in-law at an impressively sharp degree, it seems safe to assume that there’s no love lost between Derick Dillard and Jim Bob.